Tips for celebrating Holi in India from an Indian 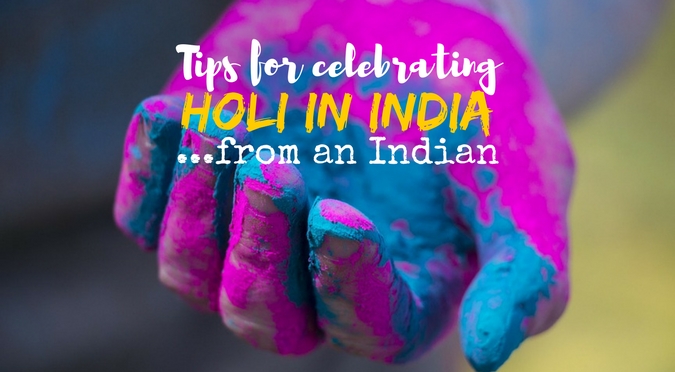 So you want to celebrate Holi in India and want some basic information before you start? You’ve come to the right page!

Being an Indian, I have celebrated Holi all my life at many locations all over the country. As per me, it’s the most awesome festival in the world! Based on my experience, I want to share some tips with you so that you can enjoy my favorite festival as much as I usually do.

A little clarification – Holi is not a type of party, but it is a festival that’s celebrated in India and Nepal. No, it’s not a psychedelic music festival but a traditional Hindu festival, which is of course, can be psychedelic because it’s colorful. And yes, it is more colorful than you imagined it to be!

I felt a need to explain the basics because I did met a few people while traveling who mentioned they love “Holi parties”. I later found out that they thought that Holi is a kind of a trance party where colors are used while dancing because that’s how they celebrate it in Europe.

When is Holi celebrated?

There is no fixed date when Holi is celebrated (at least not as per the international calendar). It is celebrated at the arrival of spring, which is the full moon of the Falgun month as per the Hindu calendar, which can be in the month of February or March. To be exact, the actual day when people apply color on each other all over India is usually a morning after the full moon of Falgun.

Where in India should you travel for Holi? 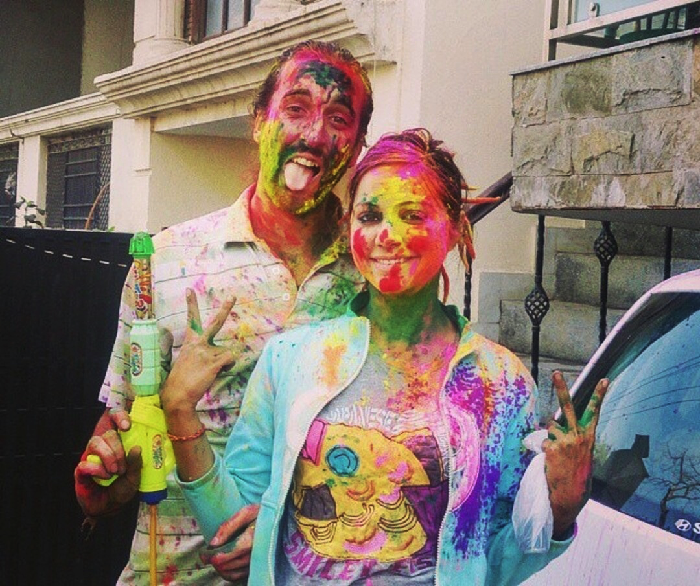 San and I celebrating Holi in India

Well, don’t just change your itinerary based on Holi because it is celebrated pretty much all over India with slight variations. In some parts of UP state of India, Holi is celebrated for a longer duration. UP is also famous for Lath Maar Holi, which is mostly celebrated in Barsana town near Mathura where women playfully mock – beat men with sticks. The state of Uttrakhand celebrated Kumaon Holi, which is a musical celebration. In most of the Indian states, Holi is actually a two-day (or longer) celebration with Puja on the first day and color games on the second. If you want to know more about how it’s celebrated in each state, you can see this.

Anyway, I don’t want to confuse you, but I know you’re most likely interested in the second day of Holi (gotcha!). Truth be told, I have hardly ever participated in the puja part of Holi and have celebrated the second day, which is the color day”. So just go to any part of India where you have friends (or at least can make some) and celebrate! Or what if you’re traveling solo? Read my next point.

What to do for Holi if you’re traveling solo?

While it’s a different thing to go to a music festival alone, but celebrating Holi in India alone as a girl is a whole different matter. I love my country, but sadly a lot of my countrymen will leave no chance in groping women when they can get away with it. Holi is one such day when they think they can get away with it. They will find reasons to touch you, maybe at pretense of putting color on your face before they grope and run away. Sadly, crime rate against women is very high on this day, so please don’t venture out alone.

Suggested: 20 Amazing Indian Festivals that are worth experiencing.

Try to make friends before Holi at your hostel or around. The best would be if you can find local women / families and just ask them if you can celebrate with them. If you don’t know where to find them, you can join this women travel group from India. Don’t worry; you won’t be forcing your company on them because most likely, they’d love to show you how they celebrate Holi. Oh but please be careful about Bhang lassi.

What to wear for Holi? 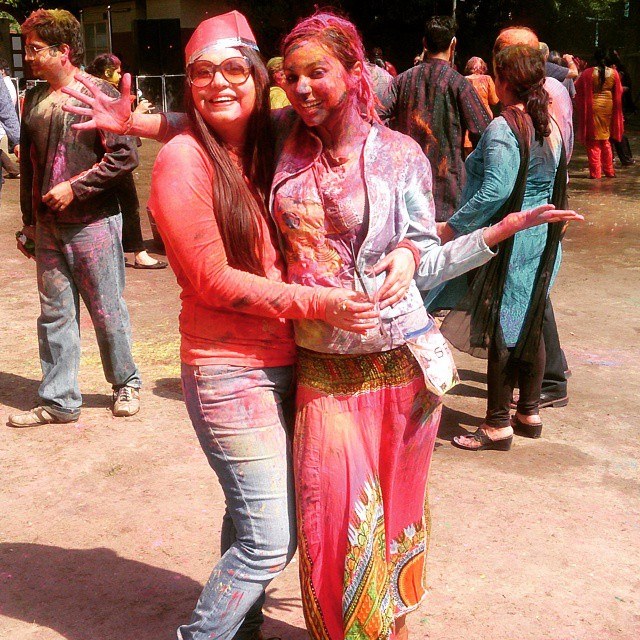 My cousin and I celebrating Holi in our oldest clothes

Find your oldest clothes, because you won’t be able to wear them again. This goes for your undies too because they will also catch the color.

A lot of websites say you should wear white on Holi but I have mixed thoughts about this. If you’re a girl, you should definitely avoid wearing white because people will throw water on you and many will openly see through your clothes. While in Western countries you may just only receive attention, in India you will receive way more than that.

Wear clothes that are comfortable, can dry quickly and can’t be ripped off easily. I normally wear an old tee shirt with cotton pants or shorts. I always wear sunglasses to protect my eyes from the color and I highly recommend you do the same!

How to protect your skin and hair on Holi?

This point is for both boys and girls. You do need to protect your skin and hair because you can never be sure what kind of color people are applying on you. The easiest thing to do is to apply layers and layers of baby oil on your skin and hair. Make sure you even apply it on your neck and around your ears. Don’t just put it on your exposed skin, but even under your clothes. Not only will you protect your skin from rashes and dryness, but you will make it easier for yourself to remove the color. I also wear a headscarf or a hat to protect my hair because my cousin throws eggs on our heads to take Holi a level higher.

Where to go to celebrate Holi?

Usually the best (and the safest) places to go are local parks, colleges, or a local family’s house. Try to find a Holi party if you can. I usually know of a few, so email me if you can’t find one.

Where should you keep your valuables on Holi?

Carry a waterproof pouch and keep a little money. Try not to carry your phone, but if you still insist, at least invest in a waterproof bag or a pouch. For many years I just carried a little money in a plastic bag and kept it in a cheap pouch.

So do people just apply color on each other?

Many of them do, but mostly it’s like a color war. While some people will politely put a few dots on you, others will take this opportunity to get rid of their yearlong frustration and literally bash you up with colors. More than just colors, it’s also watercolors and waterballoons.

Don’t get shocked when you see people throwing eggs at each other, its pretty normal for a few of them. Back in Punjab, I also saw a few boys who were putting grease on each other’s faces! 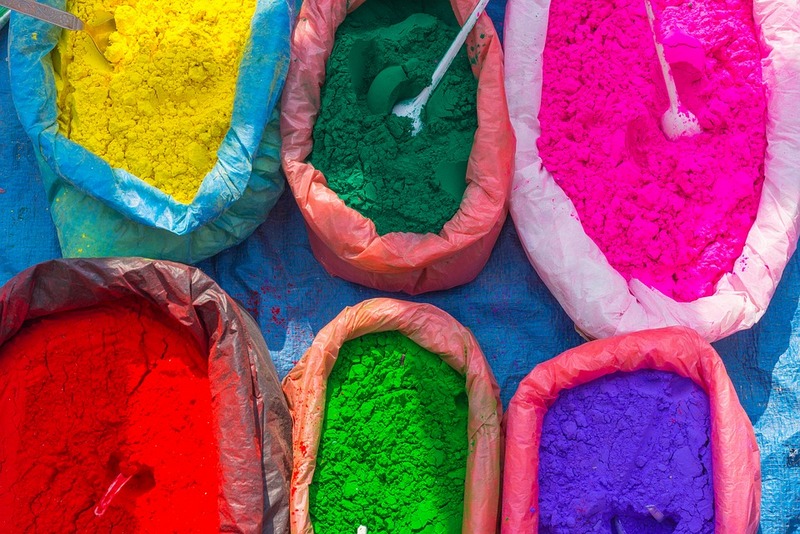 Holi in India – Holi colors on display in a street market

If you love colors, you’re going to love Holi markets because they’re full of colors. Buy chemical free colors that are made of herbs so that you don’t cause any damage.

You don’t have to buy all the shades but just one or two will suffice. Trust me you will look like a rainbow by end of the day, because everyone would have picked different colors to apply on each other.

Want to go a level higher than colors? Get a water gun! I’m sure if my mom would shake her head in disapproval if she ever reads this article. I don’t personally carry one but I am lucky that I celebrate it with my nephew and I borrow his from time to time to annoy my friends. Water balloons are even a level higher because they can seriously hurt! I don’t ever carry them but normally I get thrown at.

Bhang is eatable preparation of marijuana. It is usually in the form of milk-based drink such as lassi or thandai. Lassi is a yogurt drink and thandai is a milk and almond drink. It can also be in food, such as pakodas. It’s much more potent than just smoking a joint. You will not feel the effects while consuming it but it can really hit you hard after an hour.

On Holi, people openly consume Bhang in form of thandai, pakodas or lassi. So please be careful of what you drink or eat.

What should you keep in mind for general safety?

Don’t move around on the streets alone. There are enough frenzied groups that turn into mobs and circle around on Holi to look for a new target.

Don’t throw colors on animals. It irritates their skin and they end up licking it which can cause them poisoning.

In many places in India, small children hide in the balconies and throw water balloons at people. This doesn’t just happen on the day of Holi, but also a for week before the festival. These balloons really hurt when they hit the flesh, so please keep your eyes open. I once had a water-balloon thrown at me while I was safely sitting inside my car. It was funny and annoying at the same time!

Want epic Holi photos? Buy an action camera like GoPro! (this is an affiliate link, if you click this link and buy something from Amazon, I may earn a little commission at no extra cost to you 🙂 )

Be a child and have fun. Seriously, it is the most fun filled festival that I know of and I hope you make the most of it. 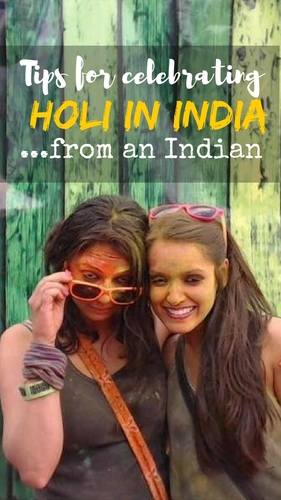 Why Holi is the most awesome festival ever

17 Psychedelic Festivals You Should Attend in 2017

Kasol and 11 Hippie Destinations in the Himalayas