Confession time – San and I are living in an adorable little town called Rheda-Wiedenbrück but I never published even a single article about it. Why? My reasons are selfish. You see, this our little Rheda-Wiedenbrück is a pretty town with literally no tourists and I want to keep it that way.

Rheda-Wiedenbrück has its own castle, river, lakes, forest, sanctuary, old town area with beautifully preserved houses that are more than 300 years old! It’s in North Rhine-Westphalia state and comes under Gütersloh district. 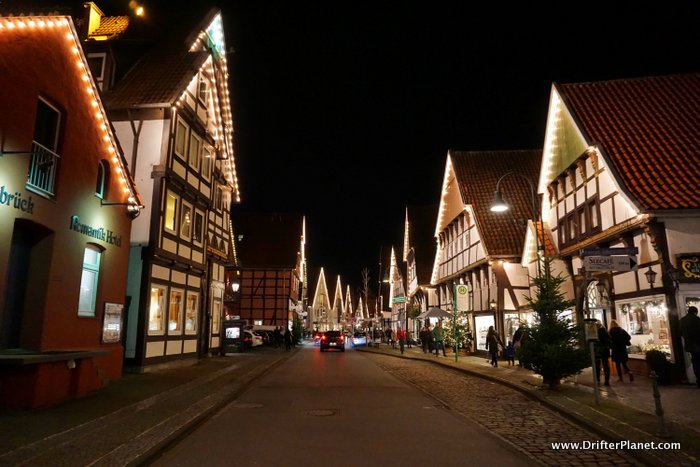 That’s all the information that you will get from me about my town for now. I’m still not ready to talk more about Rheda-Wiedenbrück but I want to show you the pictures of the Christmas market here.

If you have been living on another planet and don’t know – German Christmas Markets are famous all over the world. These markets typically start towards the end of November and continue till the end of December. Whatever your travel goals may be, I urge you to experience a Christmas holiday in Germany and visit one of the markets.

PS: There is very little information about Rheda-Wiedenbrück on the internet. If you’re driving here from any of the nearby towns for the Christmas market, then you should book a room in old town Wiedenbrück near the market. I suggest a charming hotel called Romantik Hotel. Click here to read about it on TripAdvisor. Cheers!

Try to find a small town that’s charming [like Rheda- Wiedenbrück] and most likely you will have an experience of a lifetime! Alternatively, you can try something different and head out to a pretty town in the nearby Netherlands. Look at the amazing pictures of Christmas Market in Maastricht.

Obviously the first thing that hit me as I entered this market was the lovely decoration. There was a massive christmas tree in the middle of the market and everything around was beautifully lit up. The shops look really good – not like temporary stalls that were set up just for the duration of this market.

Suggested Post – Travel tips for Amsterdam – Read this before you go 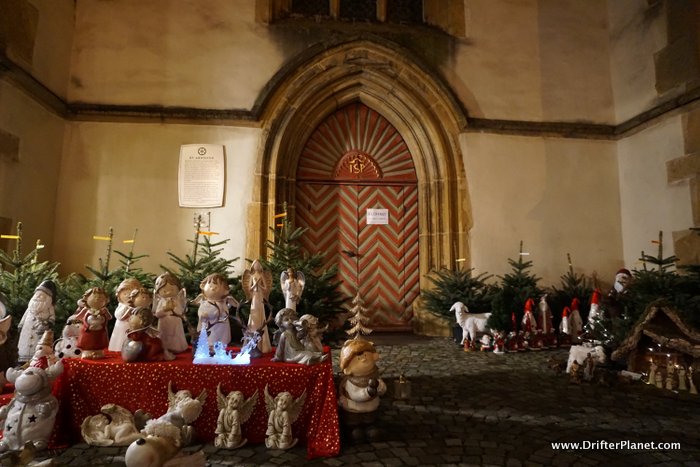 Apart from food and beverage stalls, there were shops where they sold winter clothes, Christmas gifts and many interesting wood carved toys and christmas tree ornaments.

Judge me if you must but yes my favorite German Christmas Market experience was drinking glühwein! Glühwein literally means, “burning wine” and true to its name, it will make you feel like you’re sipping fire! It’s hot wine with herbs and spices like cinnamon, star anise, vanilla, lemon, etc. 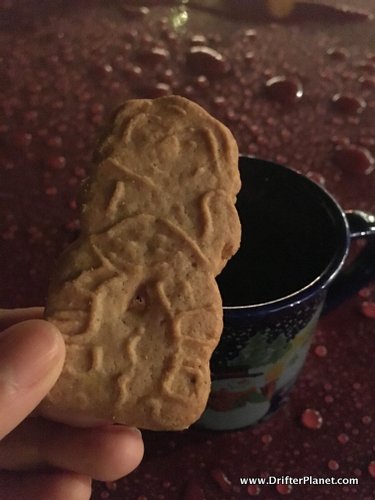 Gluhwein with spekulatius in a Christmas Market in Germany 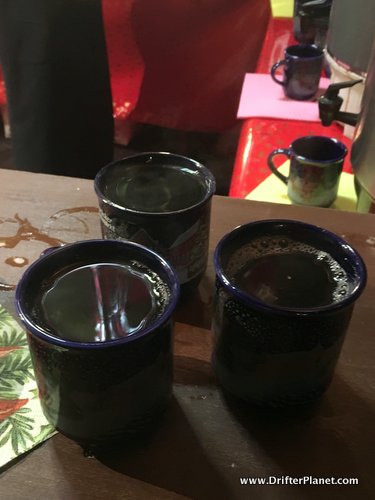 Glühwein is sweet, delicious and will make you extremely happy and warm.

Germany is very cold and the only way you can survive an outdoor Christmas market is by layering up and drinking hot wine. To make it stronger, you can add rum, triple sec and many other things. Some like Planet Wiedenbrück shop serve spekulatius (speculaas) for free when you order glühwein. Spekulatius is cinnamon shortbread cookie that’s usually baked before Christmas.

I love these little mugs in which glühwein is served! Some of them are worth collecting. My favorite glühwein spots in Christkindlmarkt Wiedenbrück are Planet Wiedenbrück and 1690 Wiedenbrück Gasthaus. I love drinking Glühwein with Cointreau in the first and Heidelbeer Glühwein in the second. 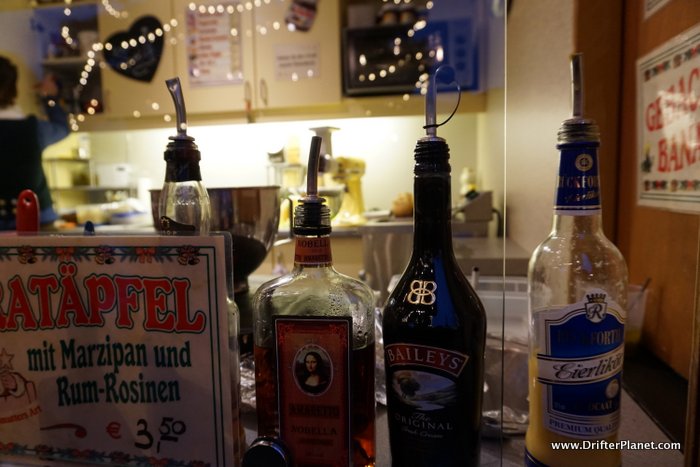 Eierpunsch at Christmas Market in Germany

By the way, Glühwein isn’t the only alcoholic beverage that you should try in Germany for christmas, there’s Eierpunsch as well, which is like an eggnog. I didn’t try it because I’m not so sure if I can handle drink something alcoholic with egg in it. Sounds eww!

Yup that’s what I said too when I saw Nikolaus but I was informed that they’re not the same. They look and dress similar but their hats are different.

Nikolaus comes out to meet children on December 6th every year, while Santa delivers the gifts on Christmas eve! Santa Claus is called Weihnachtsmann in German. I won’t get into any religious history here but I will share my experience.

I was lucky that I visited Christkindlmarkt Wiedenbrück on December 6th and I joined little children as they waited patiently for Nikolaus to show up. When he did, we walked around the town with him. It was magical!

Carousel or Merry go Round at Christkindlmarkt Wiedenbrück 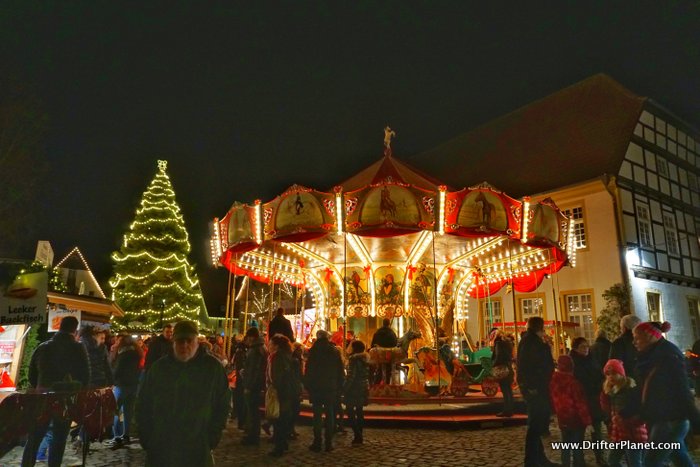 No it’s not. Grown ups ride it too. Not every grown up but people like me. To be honest, I can stand and look at this merry go round for hours. There are pretty lights, happy faces, bright colors and cute music!

Merry go round at Christkindlmarkt Wiedenbrück

After looking at my Christmas Market pictures, I realized the ones that turned out the best are the Carousel ones.

Food and Desserts at Christkindlmarkt Wiedenbrück

Like any other outdoor markets in Germany, you will find things like pretzels, wursts (German sausages), fries, Kartoffelpuffer (fried potato pancake with apple sauce) and many other things that will make you insanely fat. I tried fried apple with cinnamon and honey at Schneider Crepes and loved it. 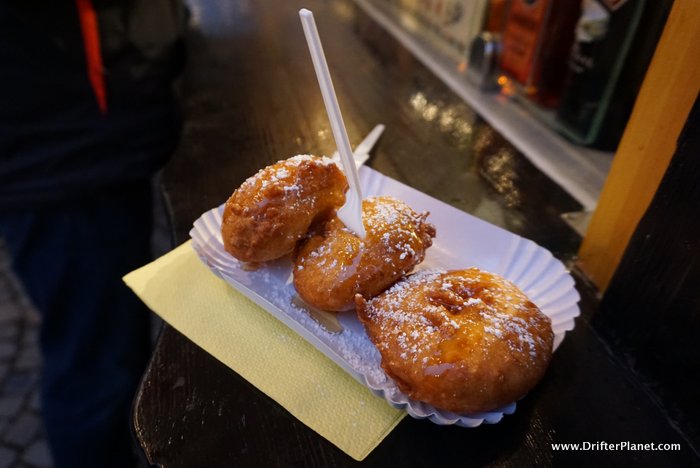 Fried apples with cinnamon and honey – Christmas Market in Germany

It was for 3 euros and was delicious! This shop had many things and the next time I visit, I would like to try one of their crepes.

I was unbelievably lucky the third time I visited Christkindlmarkt Wiedenbrück as well because this time it was snowing. Sadly I couldn’t click as many pictures with my brand new camera as I would have liked but luckily I had my GoPro for a few quick shots.

Where to Stay in Rheda-Wiedenbrück?

I will be honest – I have never had the need to ever find a hotel in Rheda-Wiedenbrück but in case you’re visiting, I suggest you check out Romantik Hotel. It is a charming old school hotel that’s near Christkindlmarkt Wiedenbrück in the old town area. To know more, read more about this hotel [and other hotels] here.

Germany is a beautiful country and I feel lucky to be living here. I’m a little ashamed about the fact that I have written very few travel blog posts about Germany but I hope to change that in the near future.

Pin any of the below few images to save this post with a friend. If you live in or around Rheda-Wiedenbrück, why don’t you share this post to show the beauty of this christmas market here.

Have you attended a christmas market in Germany? If so, I’d love to know where and how your experience was. Leave a comment below and share your story.