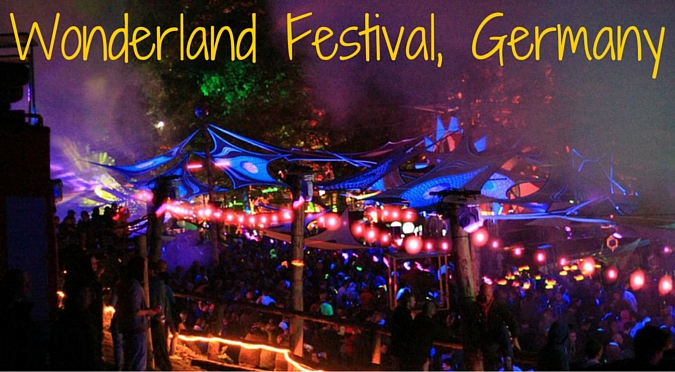 Many must have heard of the highly hyped and mainstream Tomorrowland EDM festival of Belgium, the American pre-teen pop Coachella festival of the USA and the respected Glastonbury festival of England. 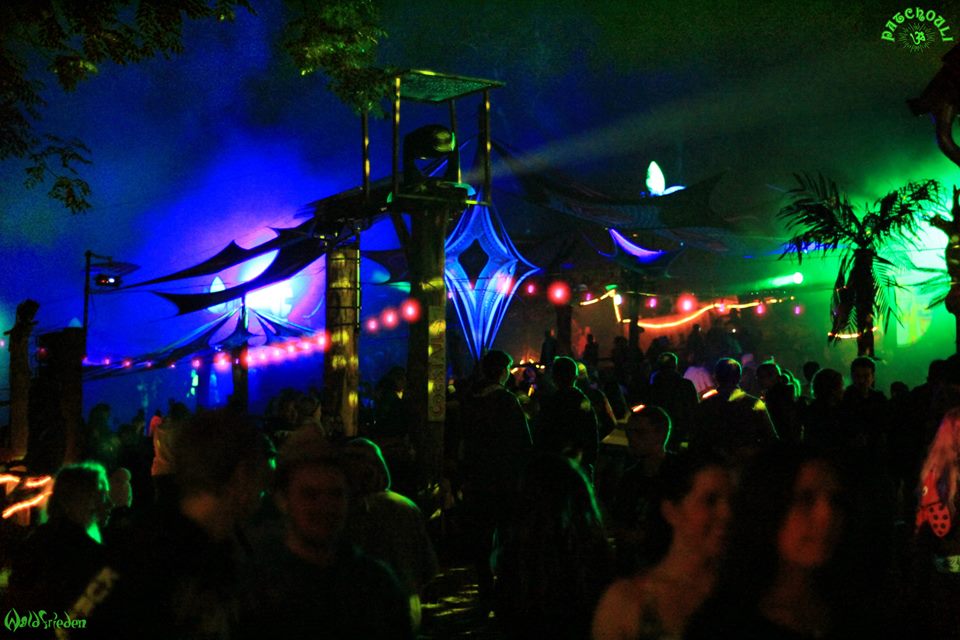 Wald Frieden is a German word which translates into “Forest Peace”.  It is organized by Wald Frieden events in their own location which is a HUGEEEEE open area in the middle of the forest.

Disclaimer: Just because we attend music festivals, doesn’t mean that we participate in intoxicants. We do it for our love of music and nothing else. Yes, we perhaps the most sober people in a festival with just a beer or two in their system. 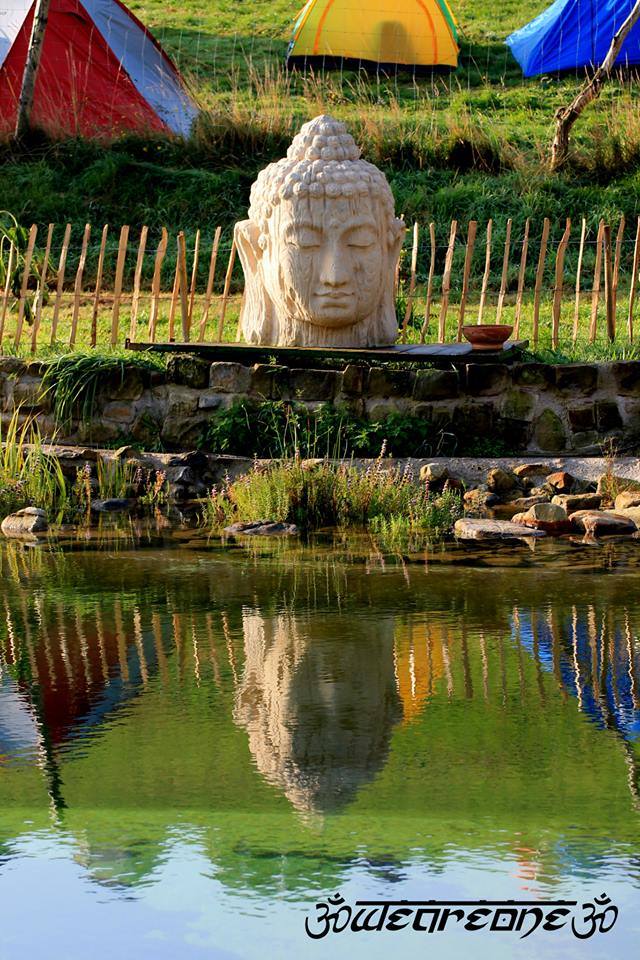 Camping area with a lake, buddha and tents.

This is a yearly festival which happens every year since 1997, so technically, much older than most of the mainstream festivals mentioned above. I like the fact that it’s not as mainstream as the ones listed above, maybe because there’s no Facebook page of this festival.

Wonderland festival is usually scheduled for August every year. There’s another festival by the same organizers in the same location called – Hai in den Mai, which is for the month of May every year.  The entry is cheaper than most of the more known festivals listed above.

To reach this festival, we took a train to Bielefeld. I must tell you about a hilarious conspiracy theory about Bielefeld or you can call it a popular German Joke.  The theory says, the city of Bielefeld does not actually exist but is an illusion propagated by an entity called “them” or “Sie” in German to disguise an alien spaceship in Bielefeld University. If anyone says they have been to Bielefeld or have known someone from Bielefeld, they are assumed to be a part of this conspiracy. 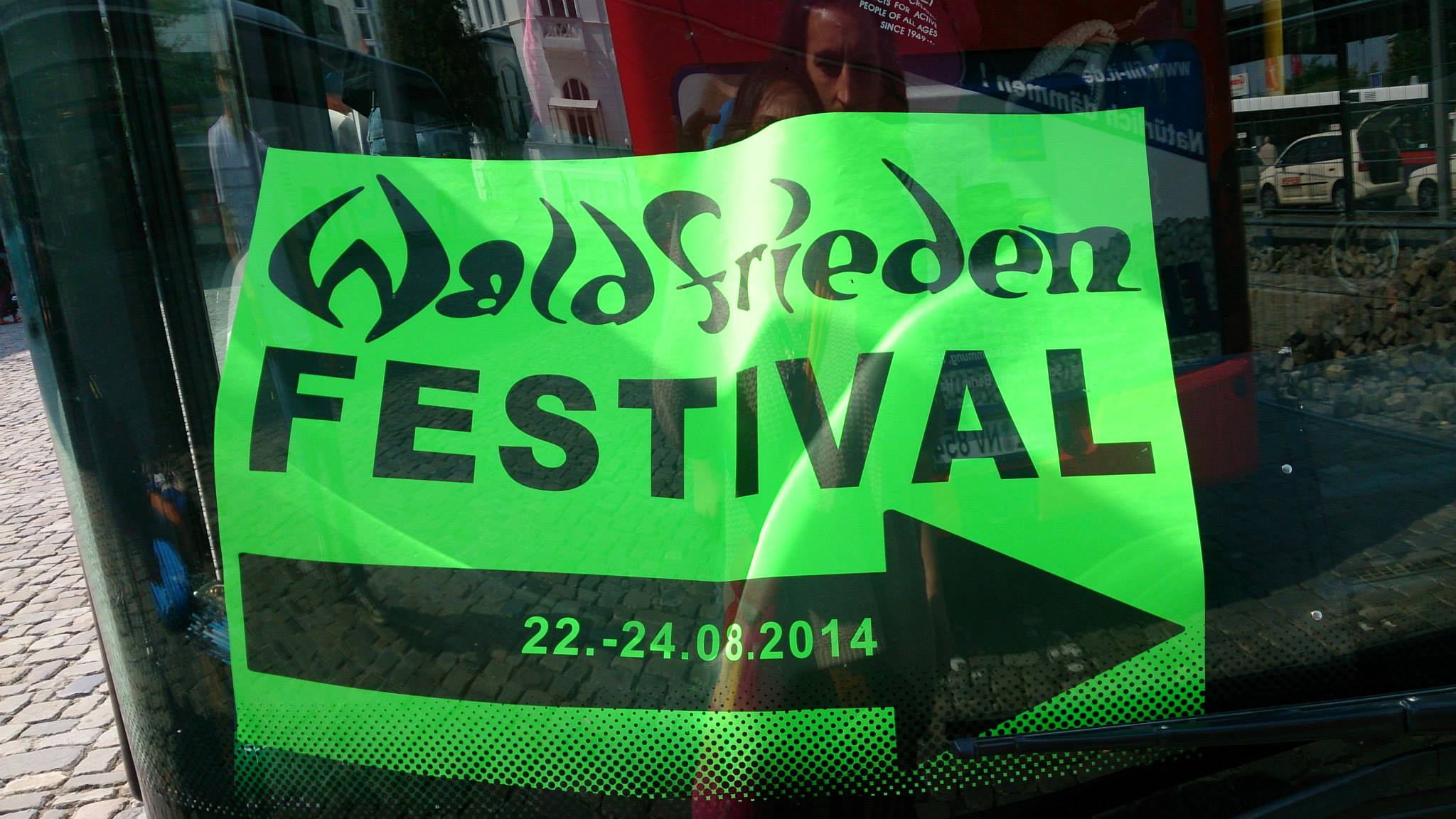 I did not know about this theory, else I would have clicked a few pictures of the station at Bielefeld to prove I was there. Darn, missed an opportunity! 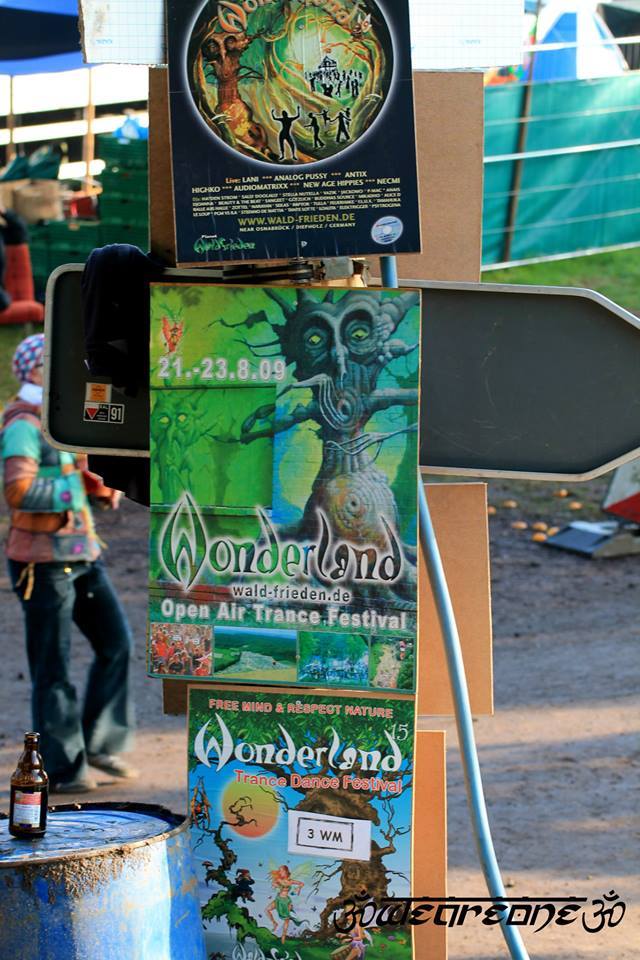 Anyway, moving away from the conspiracy theory, we took a shuttle to the wonderland festival from outside of Bielefeld train station to reach the festival a day early and so that we could find a good camp ground to pitch our tents. The actual location of this festival is Stemwed-Wehdem, in the province of North Rhine-Westphalia, Germany.

From the time we entered, my eyes popped out because this festival was at a much larger scale that I had imagined it would be.  We got our entry bands and went in, just to notice that many camping areas were already full, especially, the area around the lake. 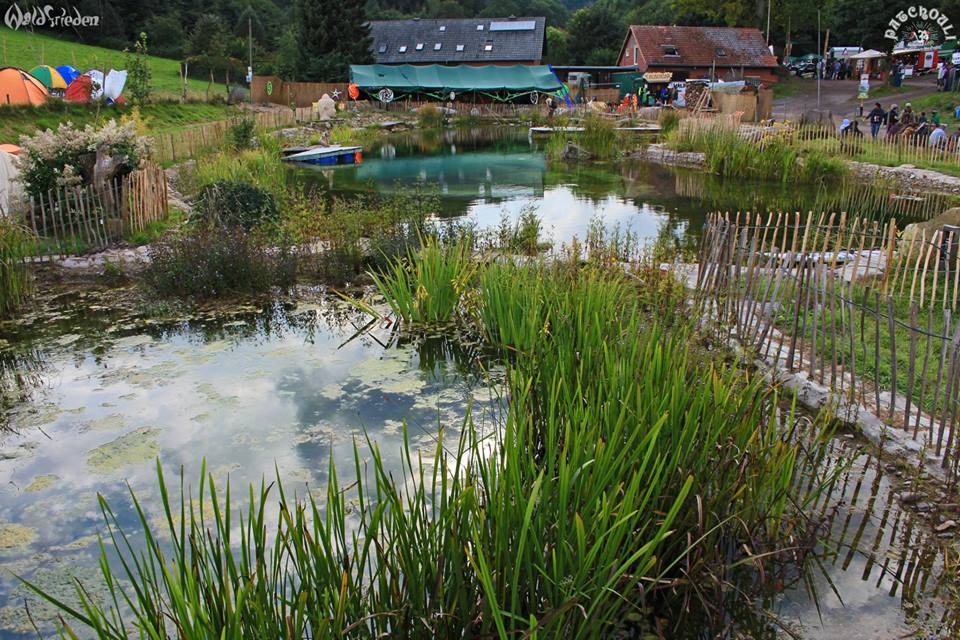 Peaceful Camp area around the lake

Nevertheless, we found a good spot to pitch our tents – a little far away from the toilets to avoid the smell but not too far also. We were many people together so we put up 10 tents and a few hammocks in a circle with a table and a few chairs in the middle. 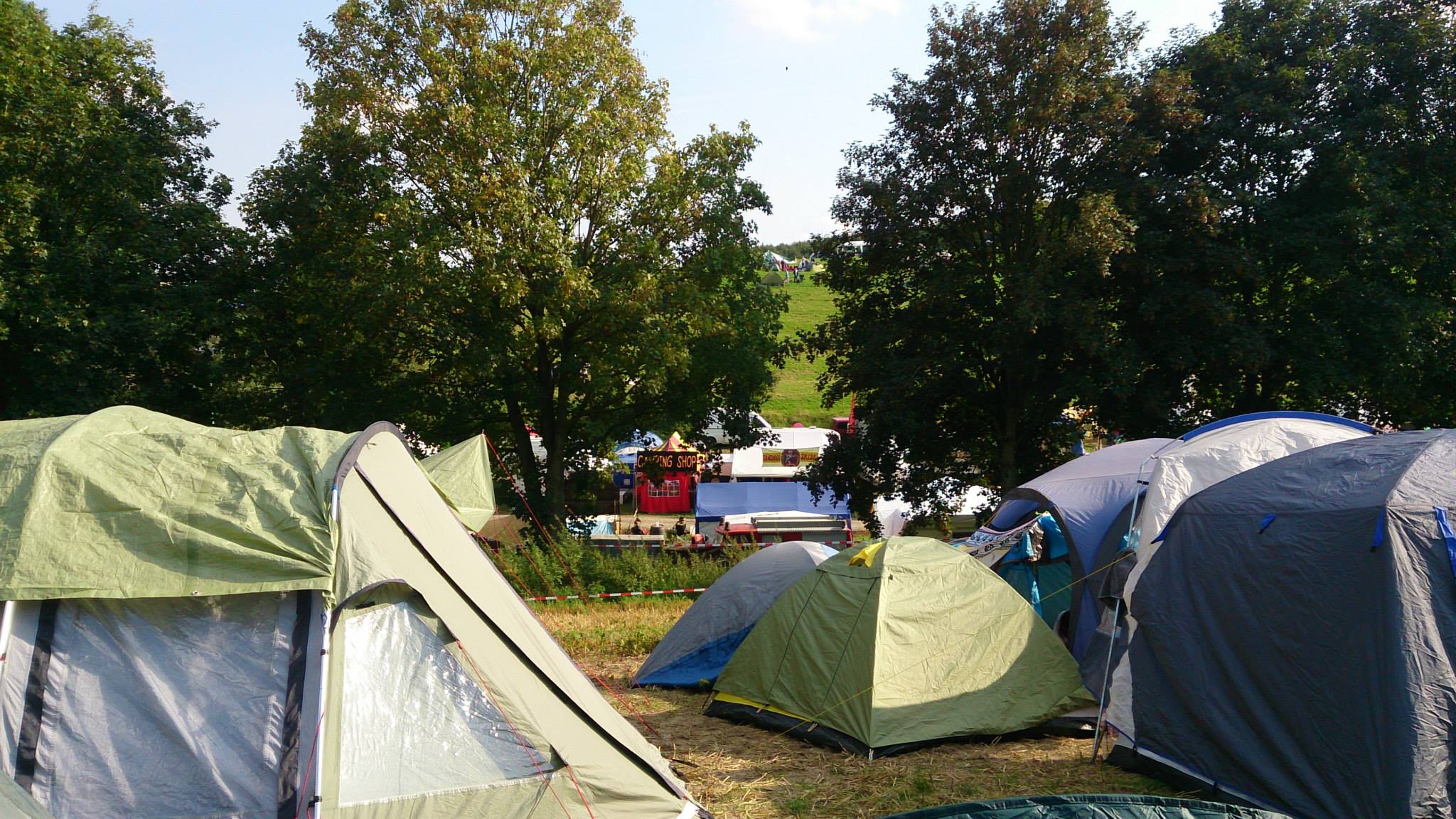 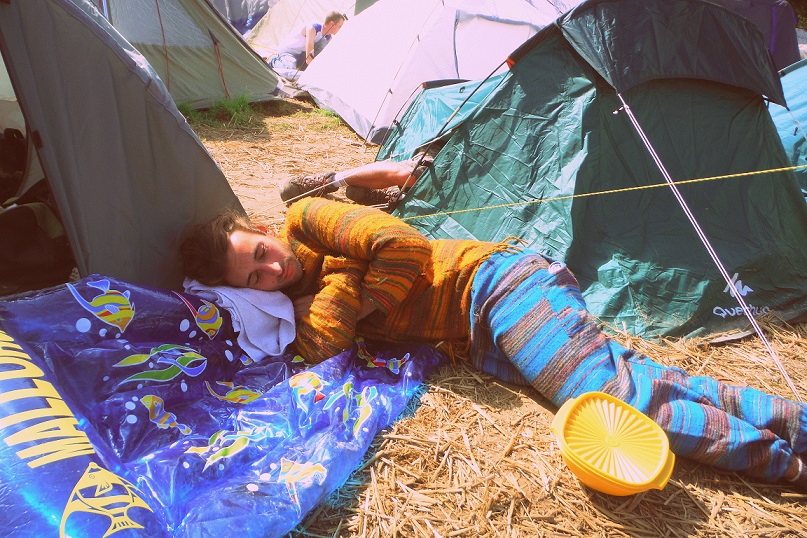 San outside our tent

One friend was traveling with his stuffed party goat – Henrietta and of course she needed a tent as well. At this point, I was overly impatient and was itching to enter the festival area. 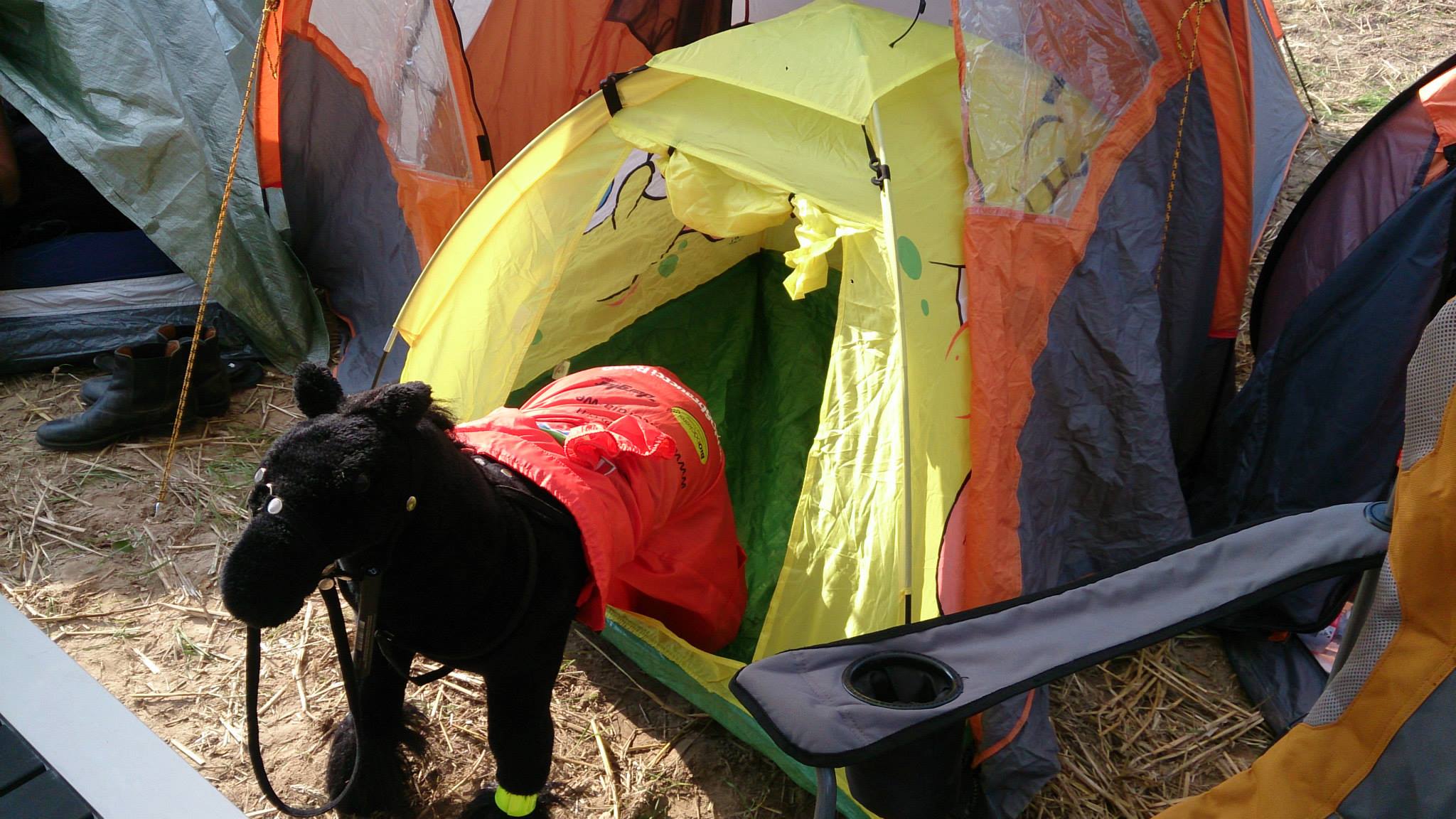 Henrietta in her tent

Moving ahead of the camp area after pitching the tents, we entered the festival area. 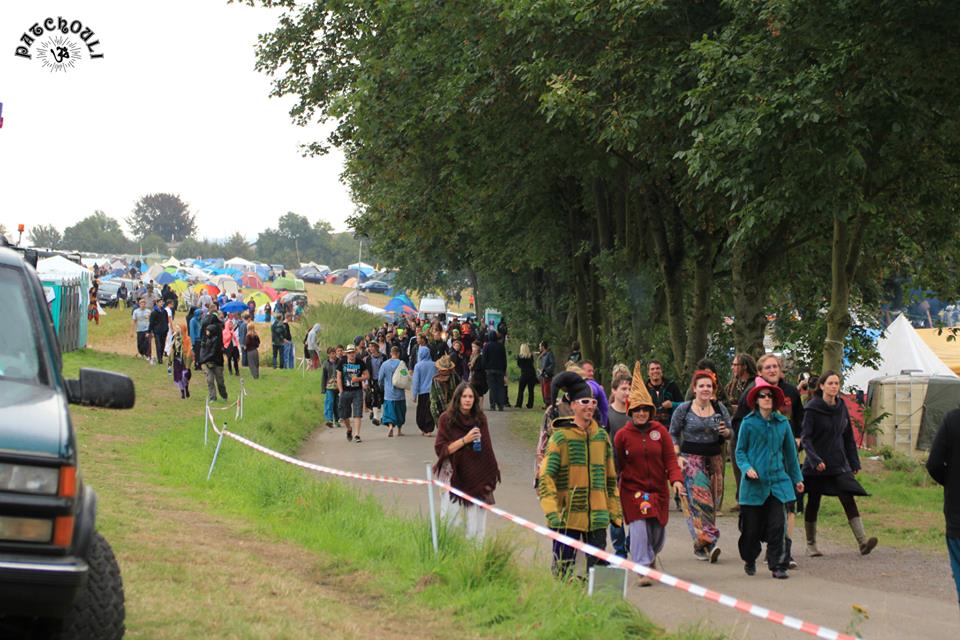 Walk from the Camping Area to the Festival

The festival area had a beautiful chill out area with many hammocks, floor beds and music. Up ahead, were many colorful shops selling beautiful handmade jewelry, clothes, poi, leather gear, psychedelic art, geometric art and so much more. 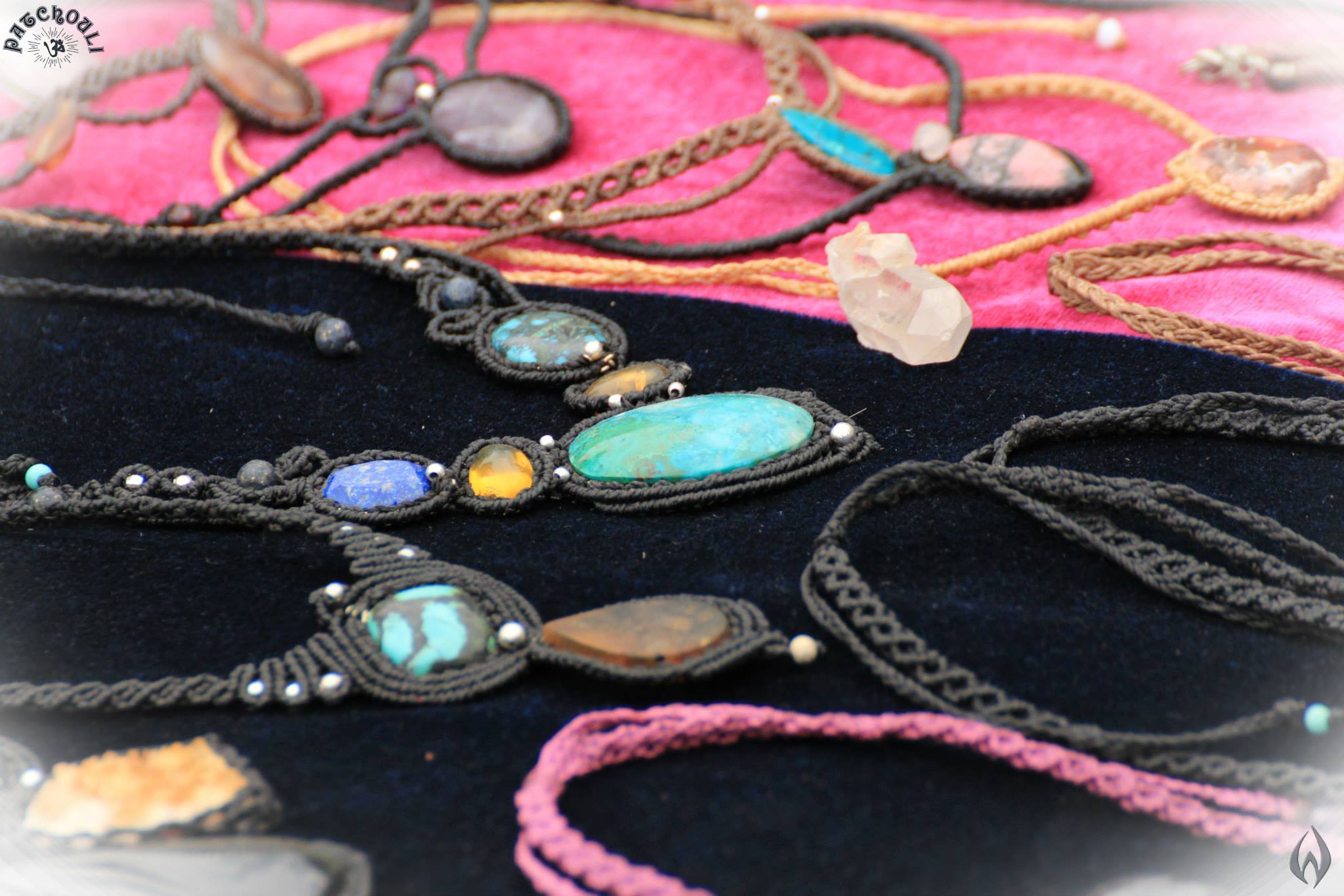 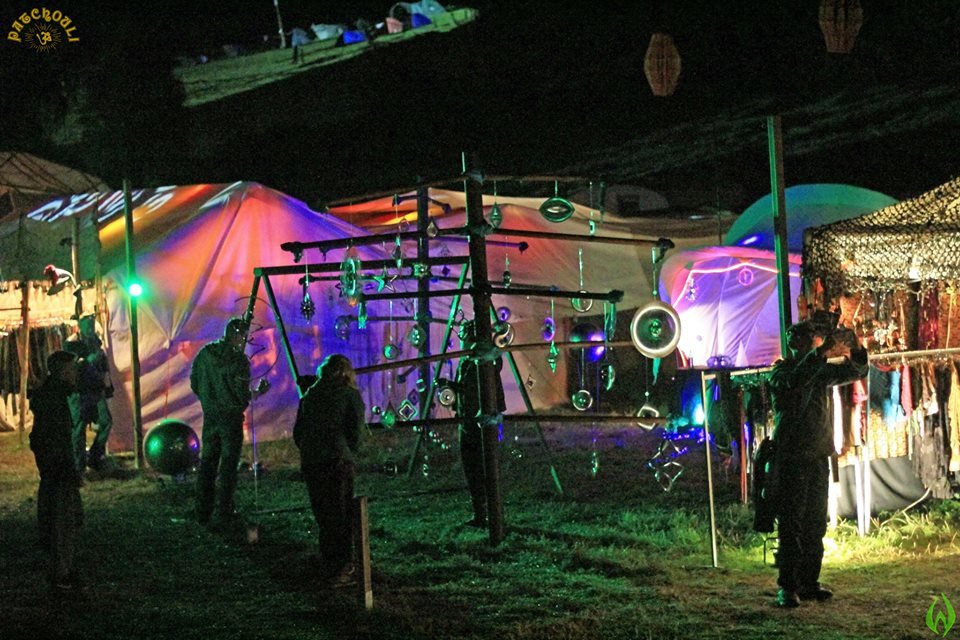 All the “festival shopping” that I did from Paharganj made me smile because the exact same things were being sold for at least 10 times more than what I bought.  For instance, something that I bought for INR 400 rupees at Paharganj, was for €60 euros (which is more than INR 4000 rupees). Of course, I carried many gifts from Paharganj for some friends in Germany. 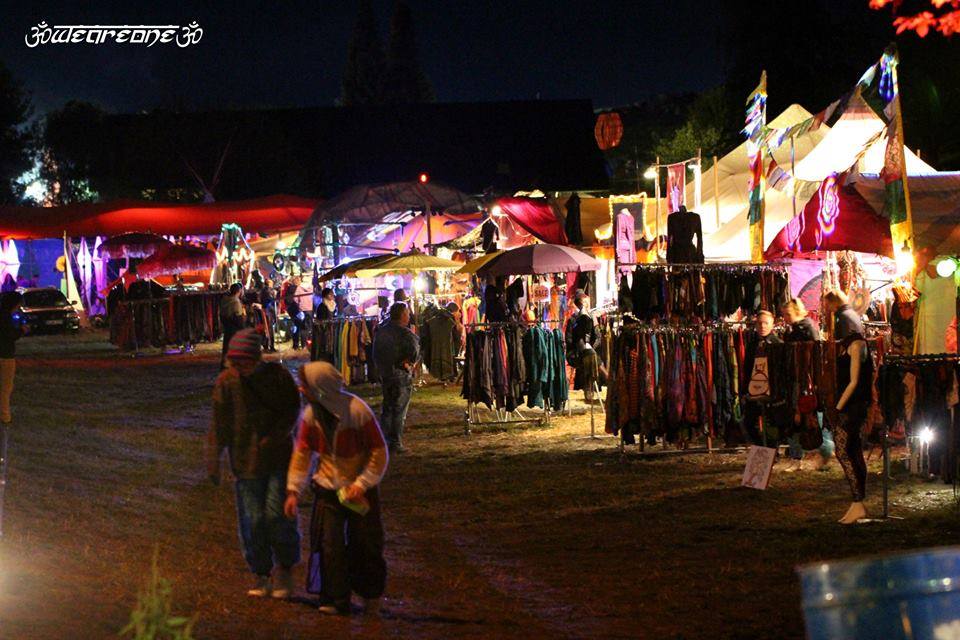 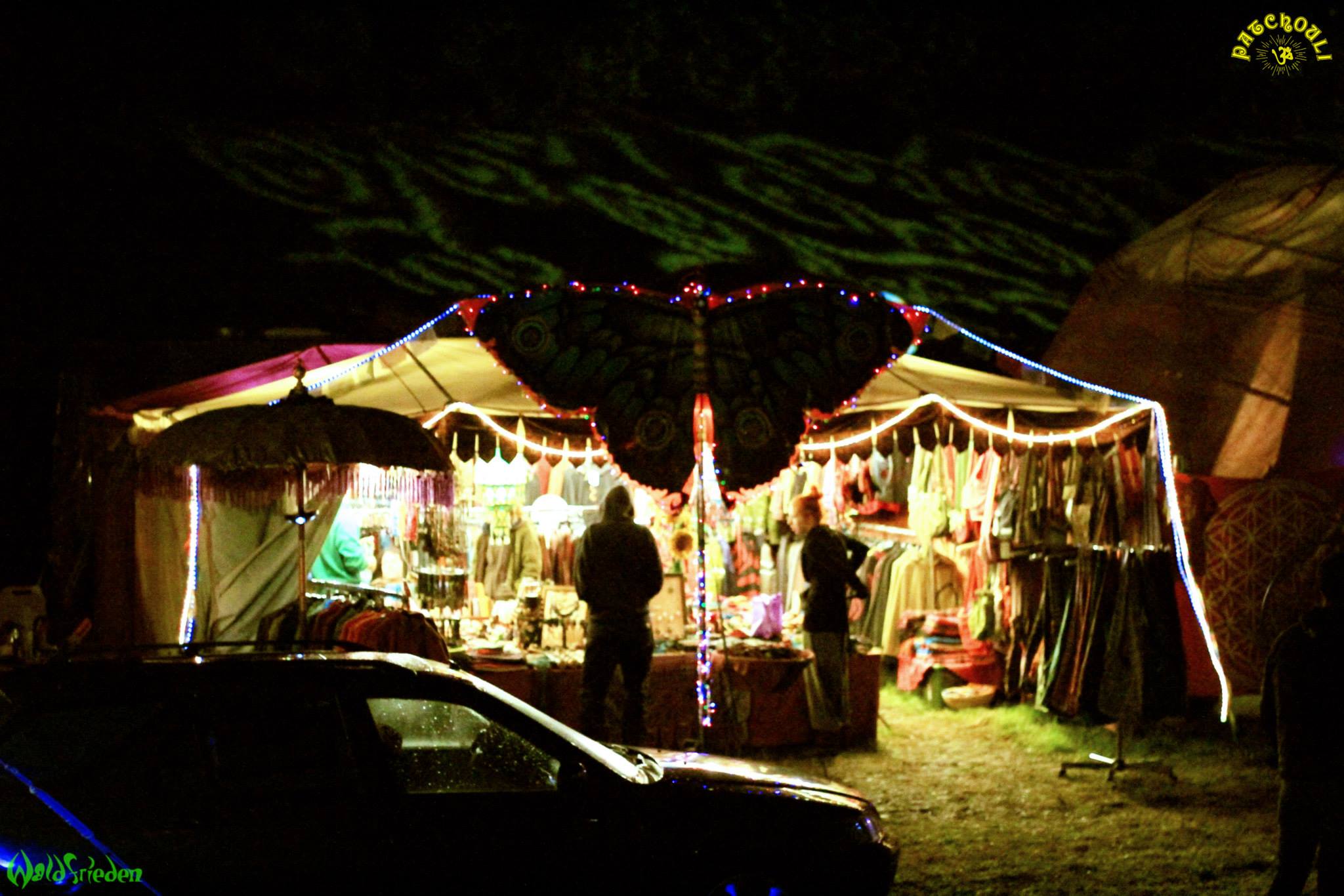 Moving ahead of the shops, we entered an area which had many eating options – fresh orange juice, real espresso, vegan energy balls, Indian Aloo Gobi, food-porn-worthy pizzas and my favorite tortellini. We gave this area a skip and headed to the main area – the trance floors! 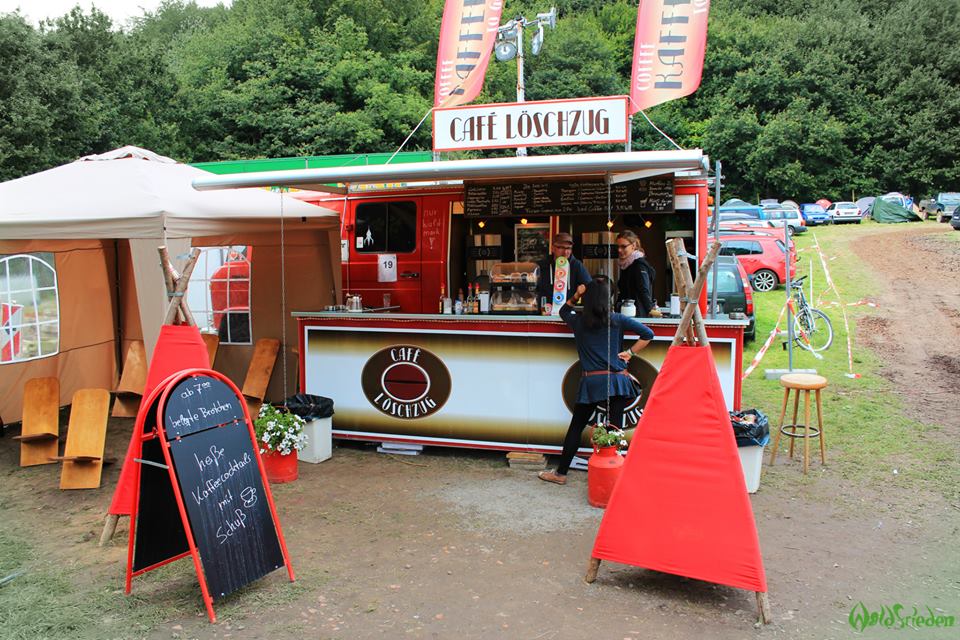 The first floor was the smallest one – with morning trance music and lovely visuals on the wall of an indoor trance floor next to it. 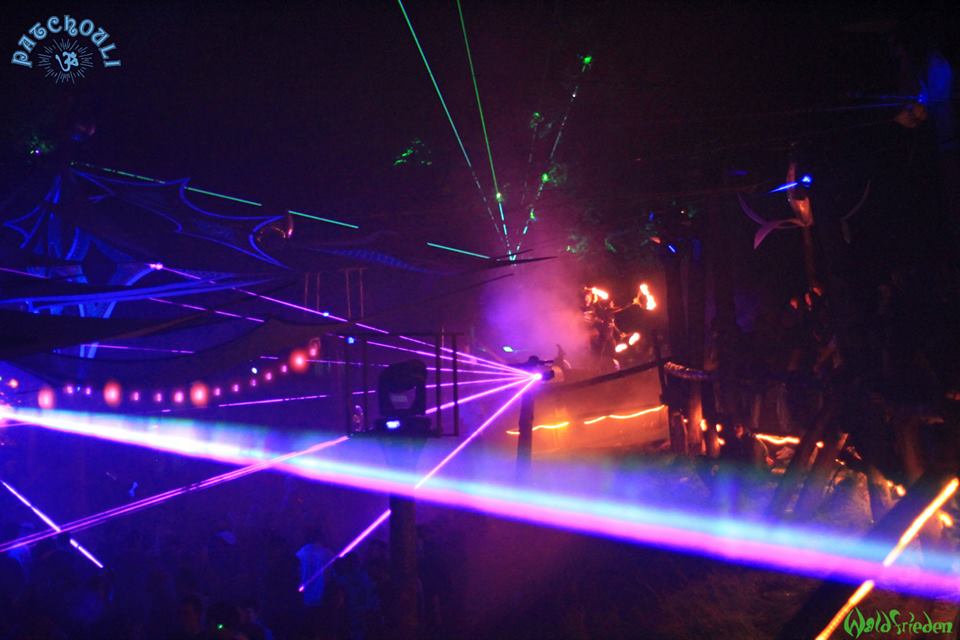 The second was the indoor area with had mind-blowing UV décor on the walls and the ceiling. This indoor area had darker trance beats.  This was the only cemented indoor area of the festival apart from the bathing area. 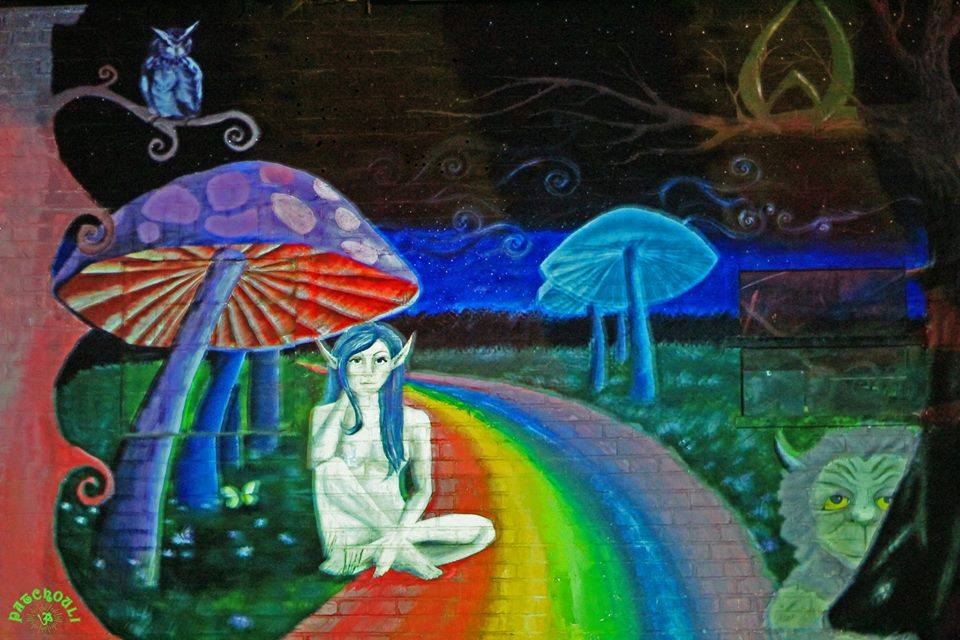 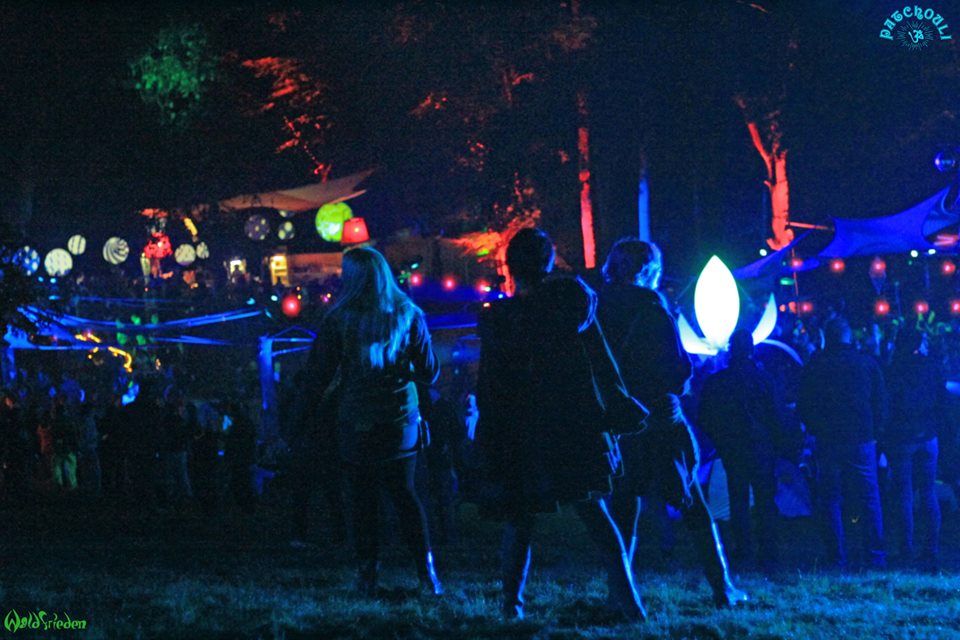 There were many smaller things and games around the main dance area.  The music in the main area was usually full-on psychedelic during the day and moved to dark psy-trance at night. 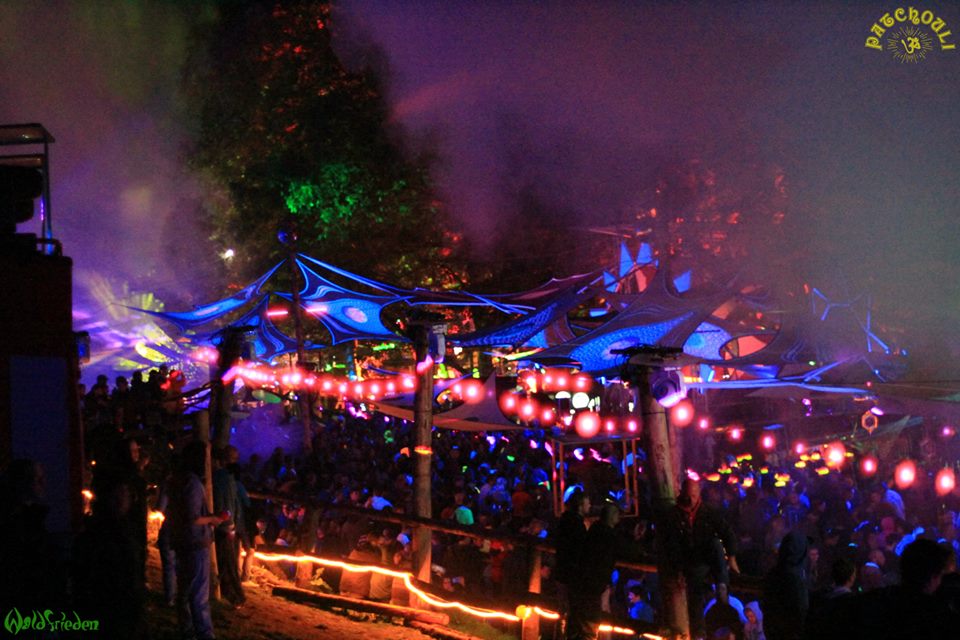 I remember a wooden area with steps that went above with a lovely view of the dance floor. 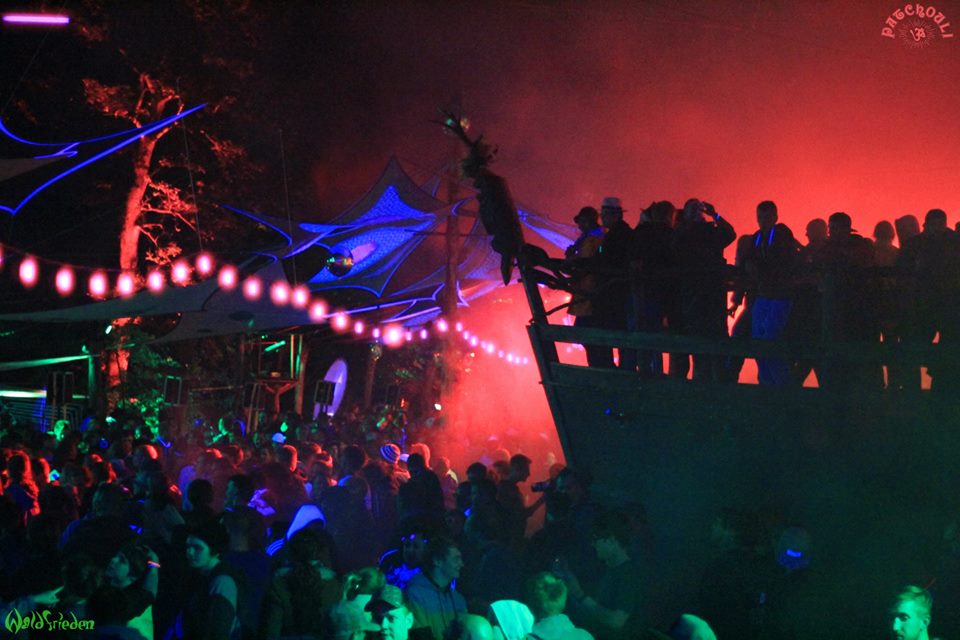 Wooden Area with a view of the dance floor

Next to this, there was a massive bonfire. There was a slide as well somewhere here.  We went for a walk beyond the festival area into the woods and saw some beautiful dragonflies. 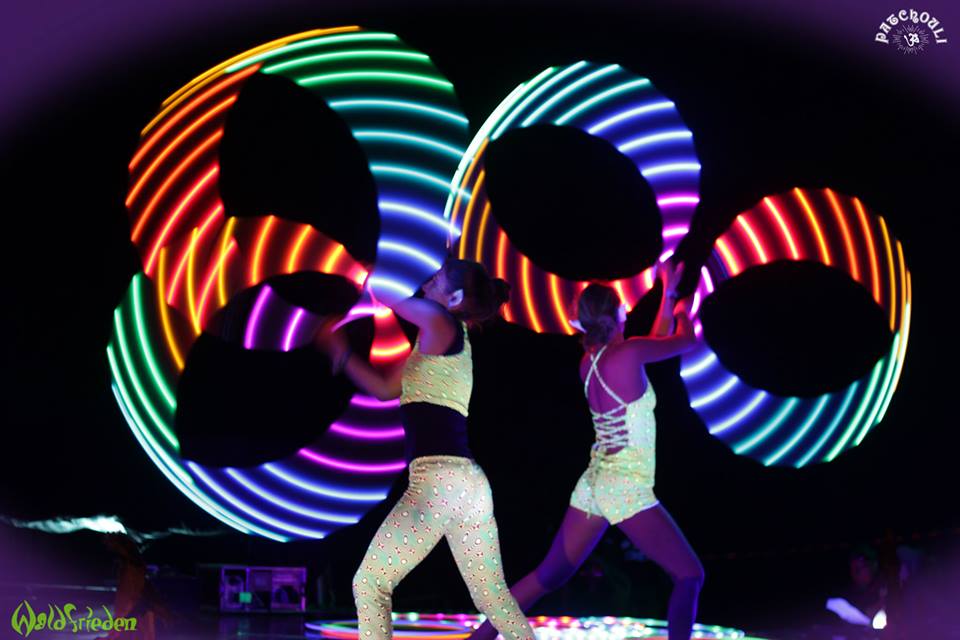 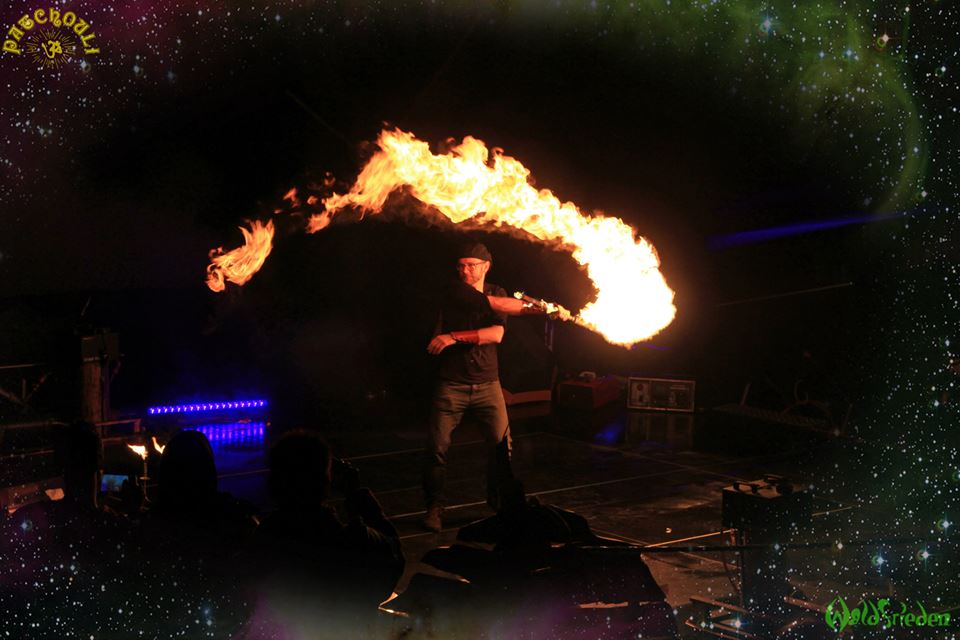 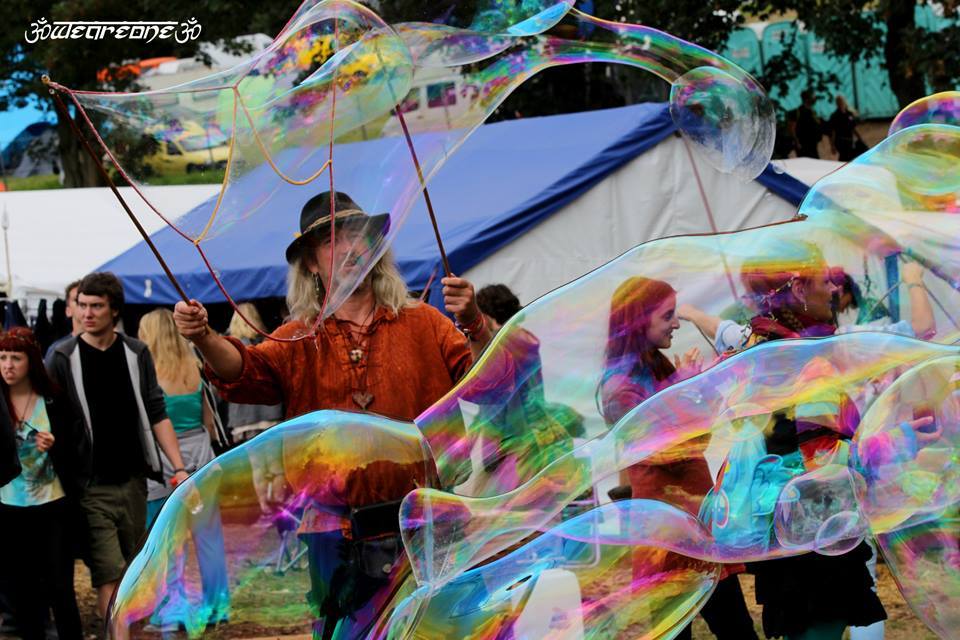 Wow, look at those bubbles!

The bathing area had a separate section for hot water and cold water.  The hot water section had a long queue so I decided to take a cold shower. Germany’s summer in 2014 was a little like Asia’s winter and that cold shower made me yell out loud, but I felt extremely fresh, warm and energetic all day. The bathing area was open with a barely there dividing wall but none of the boys glanced even once towards the girls area – total respect for privacy – amazing Germany.

Honestly, I’m not scared for heights or dark or cockroaches or spiders – but I’m scared of dirty toilets.  And much to my dismay, the toilets were DISGUSTING.  That’s one thing I love about Asia – the excess cleaning staff everywhere so most of the festival toilets are clean in Asia.  The cleanest one was of Hilltop Goa.  Anyway, I realized the toilets in the indoor dance area were the only ones that were always clean. 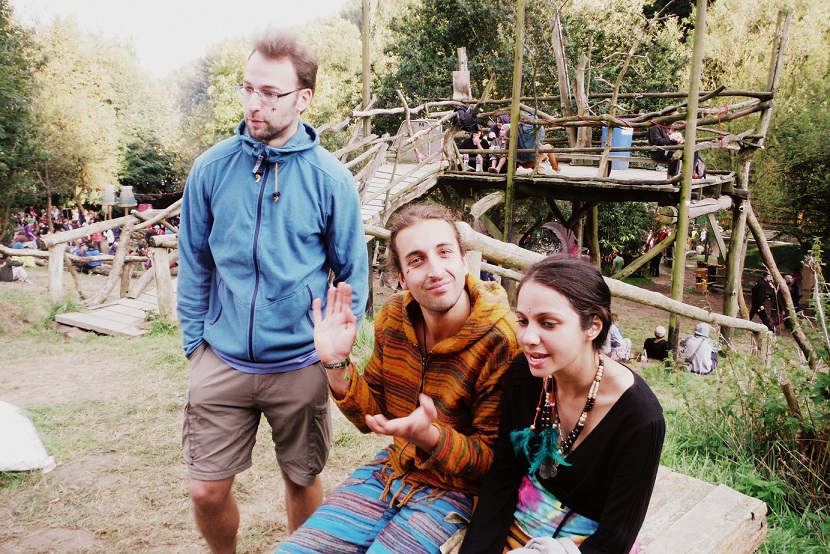 San and I (drifter) 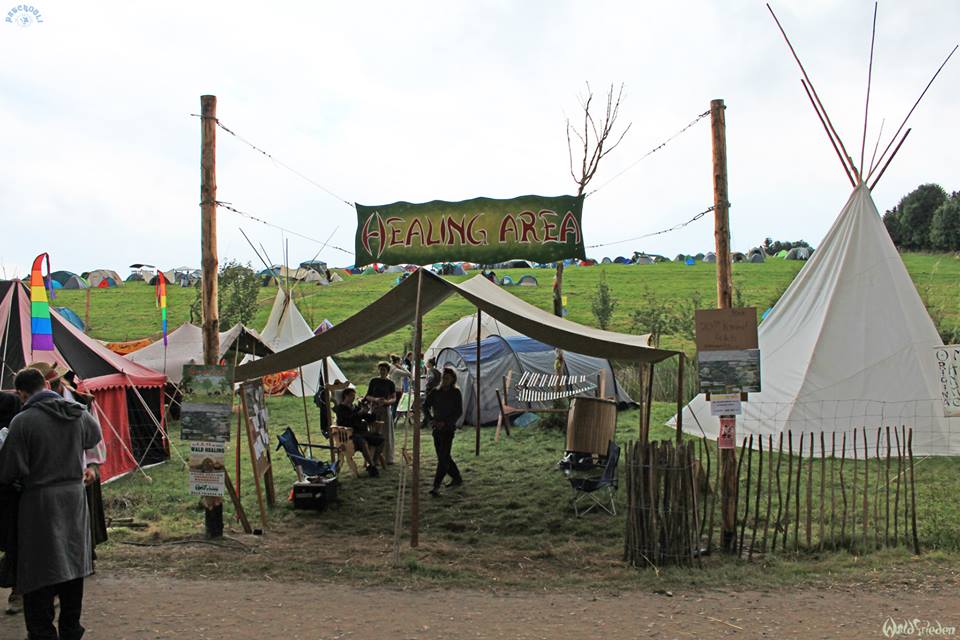 Apart from all this, the festival had a healing area with Shamans, massage area, sound therapy, yoga, workshops for poi, etcetera – but I missed all this because I was too busy dancing, drinking, eating CANDY and losing my mind at geometric and UV artwork which was all over the festival area. Obviously I was too out of my mind to click pictures, so I have taken some from”PatchouliWorld.com“, Ian Neumann and  “ॐ We are one ॐ Photography”. 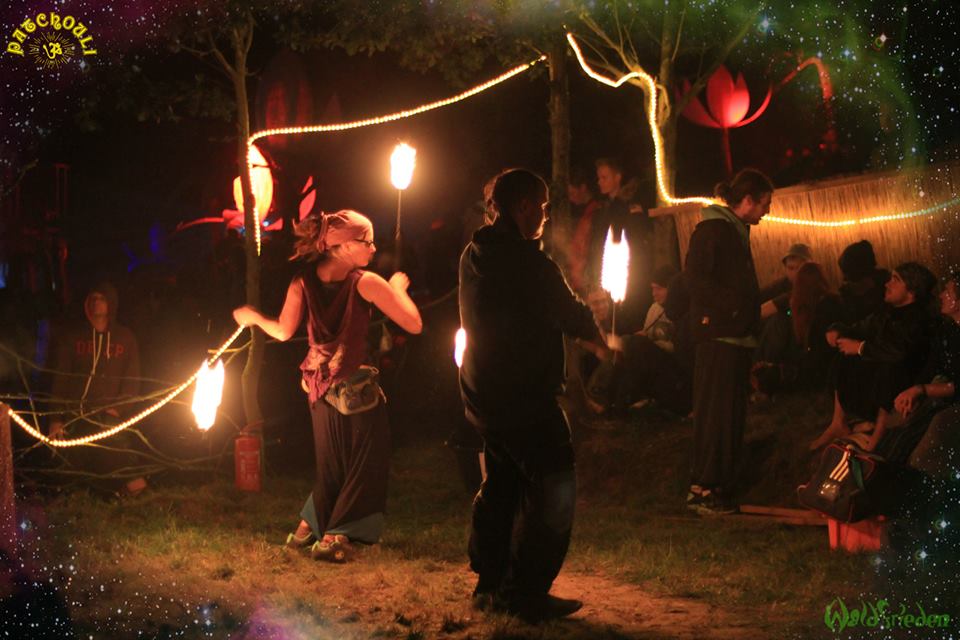 My advice to anyone that’s visiting Europe is to check out these not so famous festivals such as Wonderland.  The lesser known ones are not small (wonderland easily had 5,000 to 7,000 people) but are definitely more affordable.  These lesser known festivals have an advantage of vibes which are very clean because they are visited by happy psychedelic people who visit for the amazing music and psychedelic experience, instead of loud selfie-stick holding tourists who visit to check them off their lists. I never faced a language problem here because almost everyone that I met here understood English and spoke fluently. 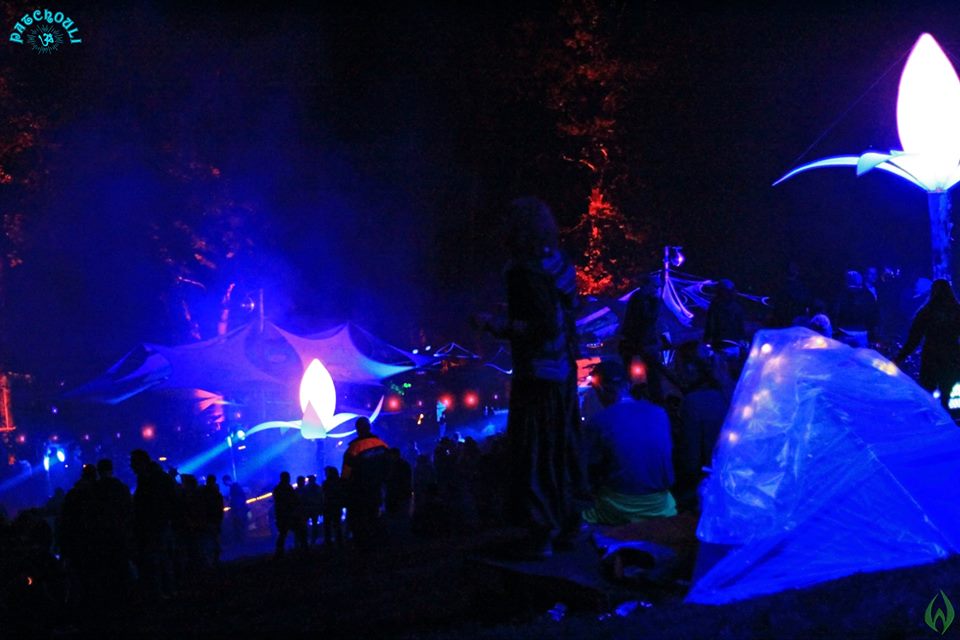 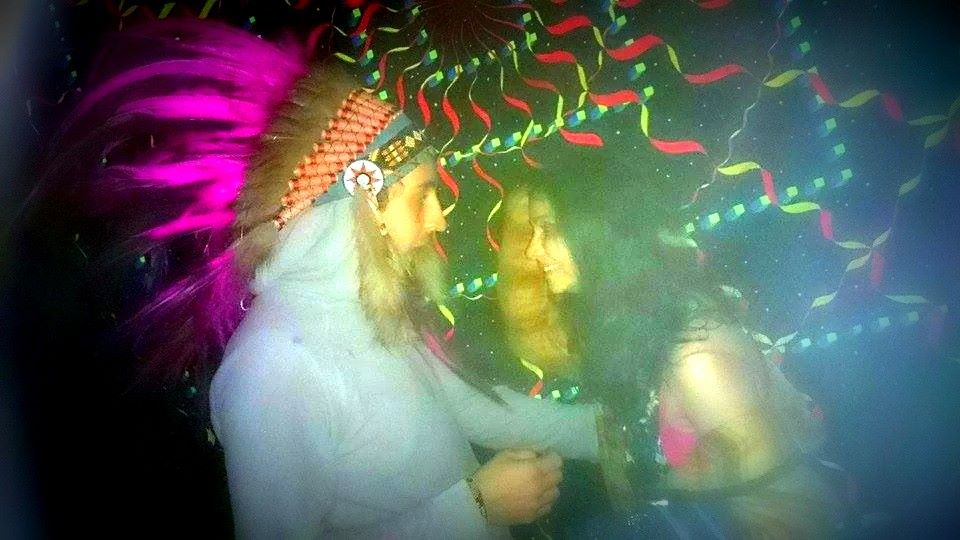 San and Drifter at wonderland – Ian, thanks for the picture 🙂

Photo Credit: “PatchouliWorld.com“, “ॐ We are one ॐ Photography” and Ian Neumann.

Do you like my posts?  Please support me by following me on Facebook by clicking here. Please subscribe to my newsletter by entering your email address here.

Leave me a comment to share your opinion or if you recommend another Psy-Trance festival for me to visit.