Neil Island of the Andaman and Nicobar Islands, India 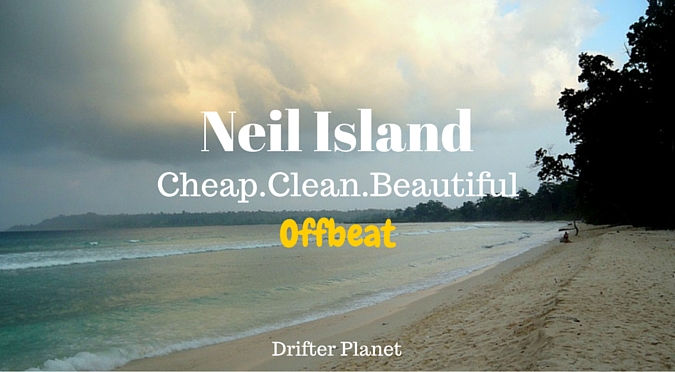 Imagine a paradise island which is many hours away from the main land with empty soft sand beaches, extremely blue water, no cell phone connectivity, amazing seafood curries, simple village life, extremely polite (and sweet) people and unbelievably affordable. Yes, this is in India. Let us introduce you to Neil Island of the Andaman and Nicobar Islands. 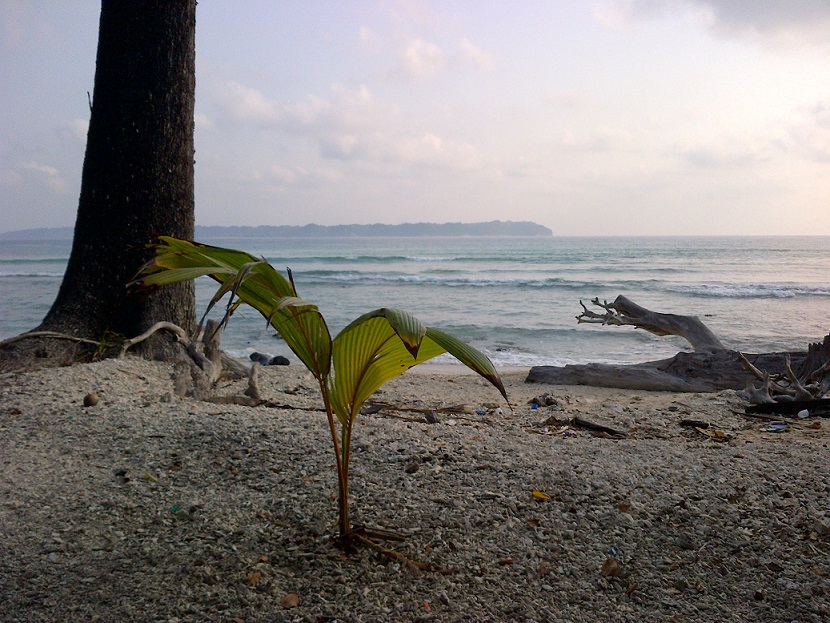 Where is Neil Island? 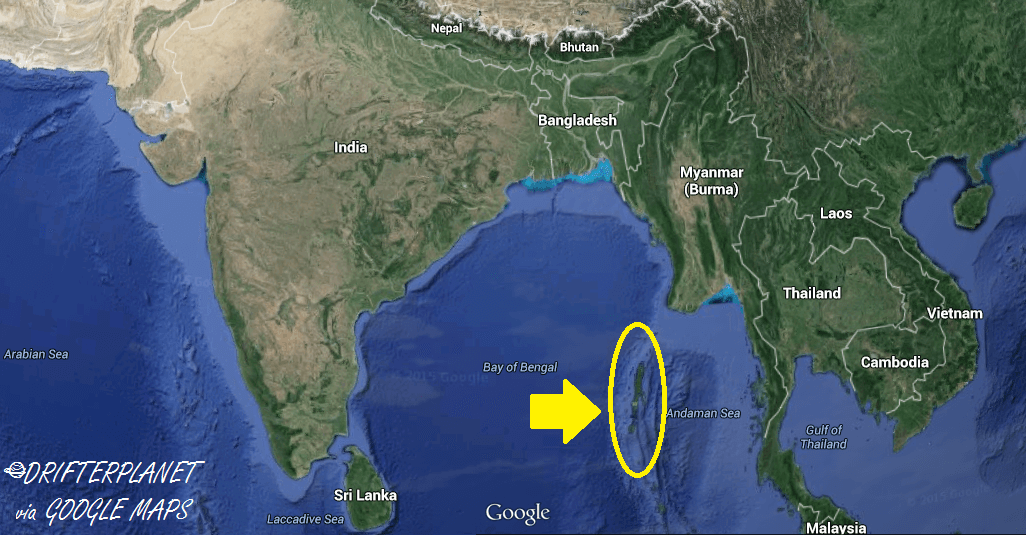 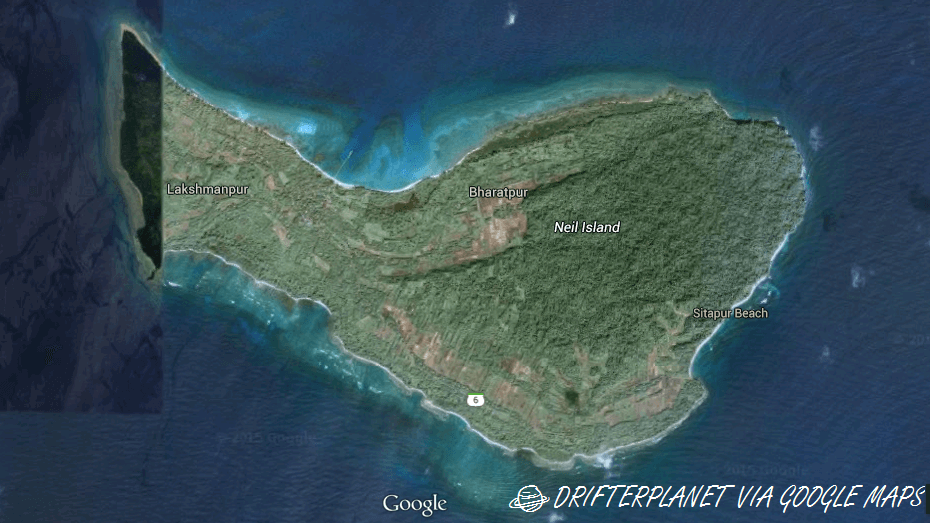 How to reach Neil Island?

The entry point to the Andaman and Nicobar group of Islands is Port Blair. You can reach Port Blair by flight or by a 4 day ferry from Chennai. Flights to Port Blair run only from Chennai, Bhubaneswar and Kolkota, India. From here, a number of ferries depart every day for a few islands.

The best way to reach Neil Island is to take a government ferry from Port Blair which normally takes around 2-3 hours, depending on the weather conditions. A government ferry will cost you between INR 500-800 Rupees. There are different kinds of tickets for this ferry with a limited number of tickets with seats and a higher number without seats.  I would recommend the latter option if you want to sit on the deck to enjoy the view in the open. I found the sitting section to be stuffy.  For your trip back to Port Blair or Havelock, you can book a ferry directly from Neil Island. Unlike Havelock Island of the Andamans, the ferry queue in Neil isn’t a nightmare.

Alternatively, you can book a high speed catamaran – Makruzz for between INR 950-1400 depending on the class, which takes around 1-2 hours.

Apart from ferries, there is a chopper service and a seaplane but we did not look at those options because we’re tightfisted backpackers.

Any guesses which option we picked? 🙂

Neil is a small and an extremely scenic island in the south of the group of Andaman Islands of India. It is still unaffected by tourists unlike Havelock. But don’t get me wrong – even Havelock is not that well known.

Two days are enough for Neil Island but I recommend you stay here for a longer period to get a feel of this place. Don’t come here if you like loud parties and if that’s the motive of your vacation. Smoking in public is an offense and if caught, cops can fine you up to INR 500. However, you can smoke in the restaurants after taking permission from the owners. 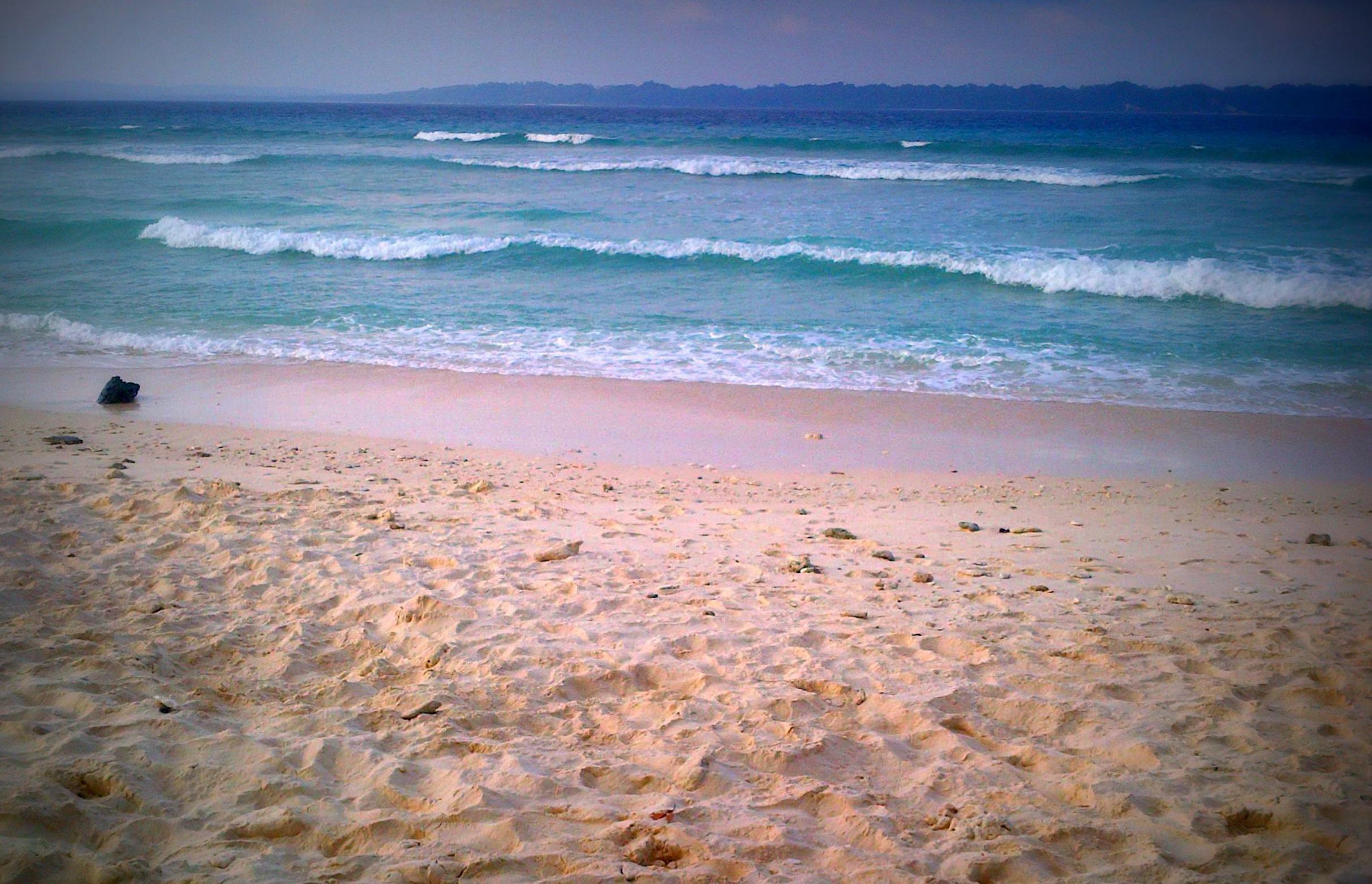 Our experience on Neil Island

We arrived in Neil Island from Havelock Island after spending a few days there. Many people had suggested us to skip Neil Island altogether because they said there’s nothing to do but we’re glad we did not listen to them. I have to admit Havelock is more beautiful but Neil Island is smaller, empty and has some magic in the air. 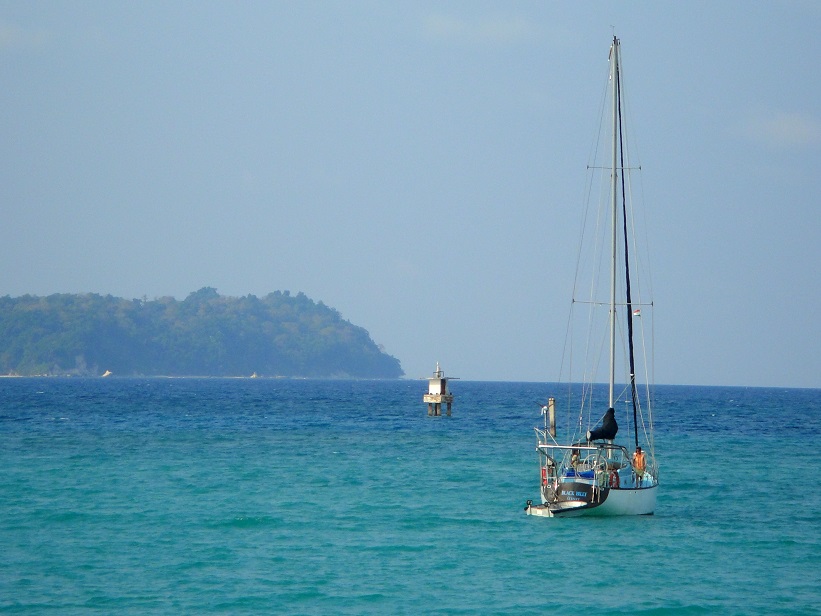 As we arrived, we were amazed to see calm blue water, which appeared to be bluer than Havelock’s water. The jetty area appeared deserted apart from the handful of people that got off from the ferry and but we realized later that it was one of the more crowded areas of the island. 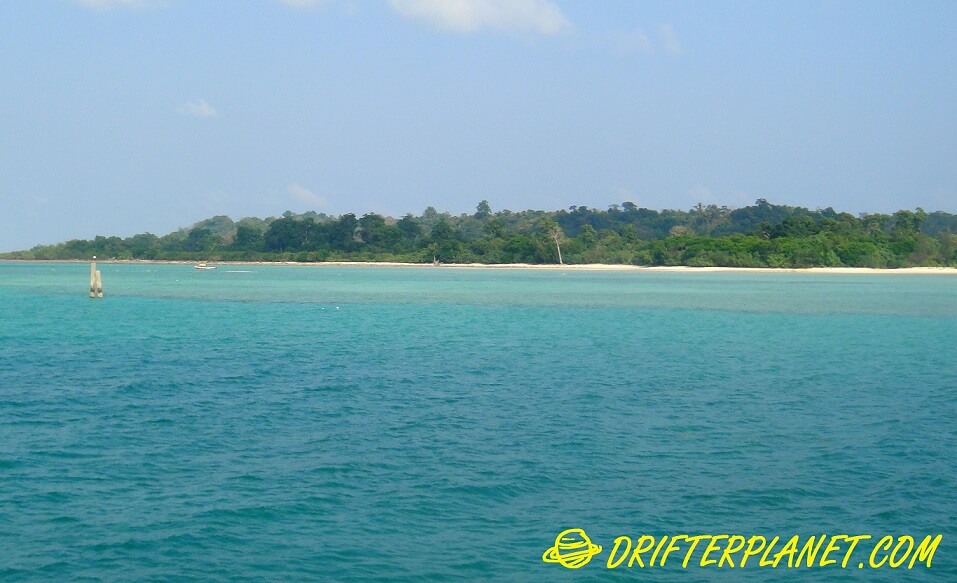 We caught a tuk-tuk for Tango beach resort which took us only 5 minutes to reach and costed us only INR 40.  We could have easily walked till there, but I guess we will do that in our next visit.  Our Hotel had some beach side cottages and many concrete rooms in the main resort area. Our room costed us INR 999 because we were told that there are only two places to stay on this island. 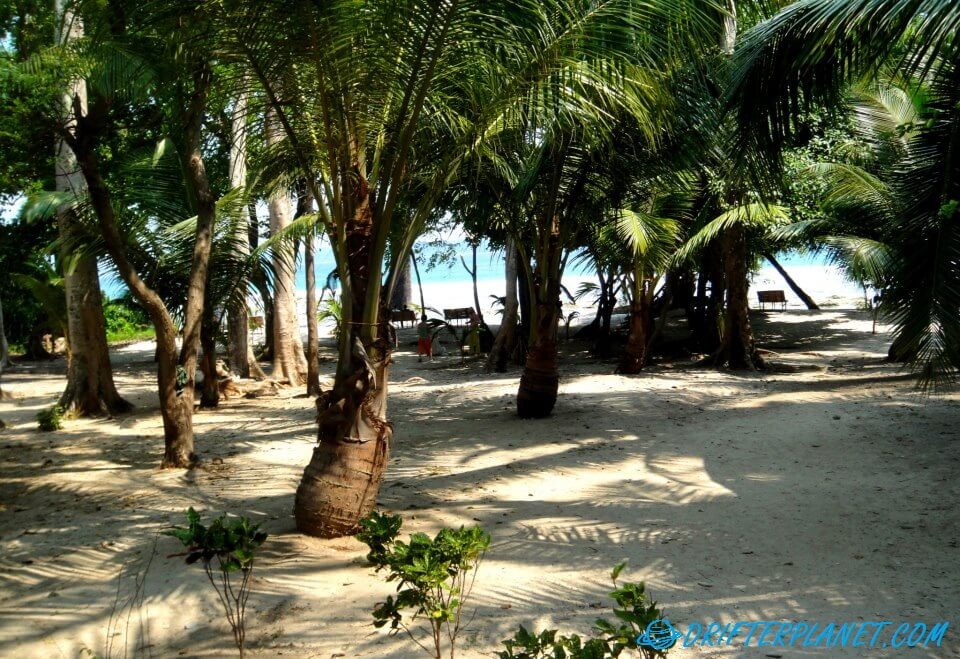 However, if you want to take a chance and land here without any booking, you can ask the restaurant (roadside shacks) owners, they usually have a few rooms for rent which are never advertised online.

The Vibe on Neil Island

It took us very few hours to discover how relaxed everything on this island is. Life is slow here, which is what we wanted from our Andamans vacation but unfortunately couldn’t get that on Havelock Island. The best part was no cellular phone connectivity so it felt like a “real” holiday. We saw noticed how every family here had a bunch of domestic animals – cats, dogs, chickens, hens, etc. 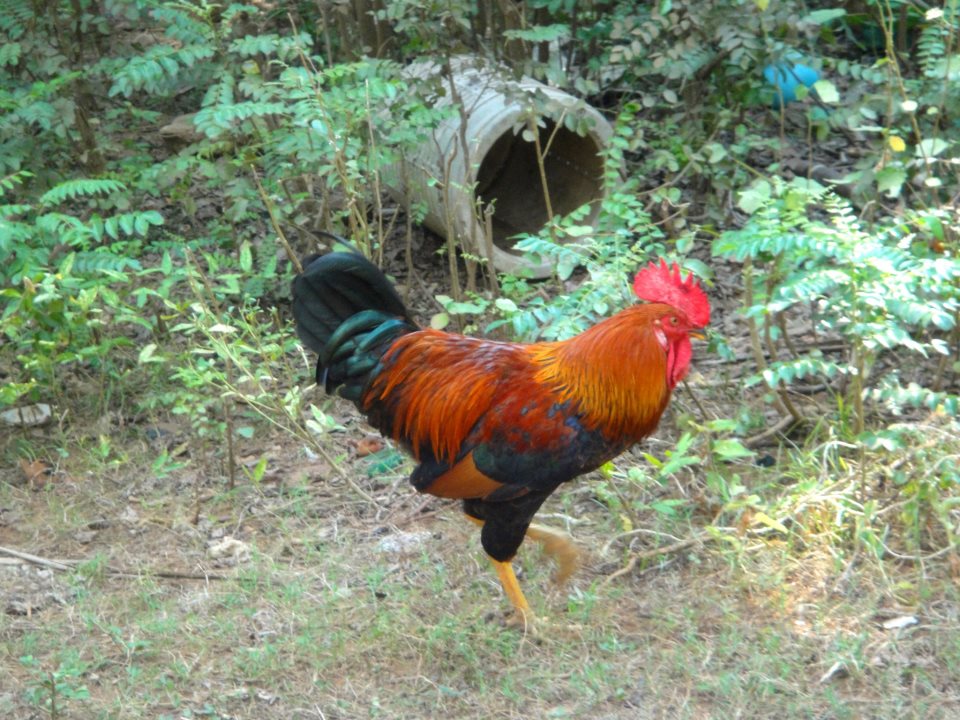 Chicken and Farm Animals on Neil Island, the Andamans

Getting Around on Neil Island and my little accident!

Neil is a very tiny island where everything is a 10 min scooter ride away. Scooters were available on rent for 300-400 per day however we chose to rent bicycles instead for INR 50 per bicycle. Having grown up in a small town where we used bicycles to reach most of the places but now living in a city where I never get an opportunity to ride one, I was itching to get on one really fast. 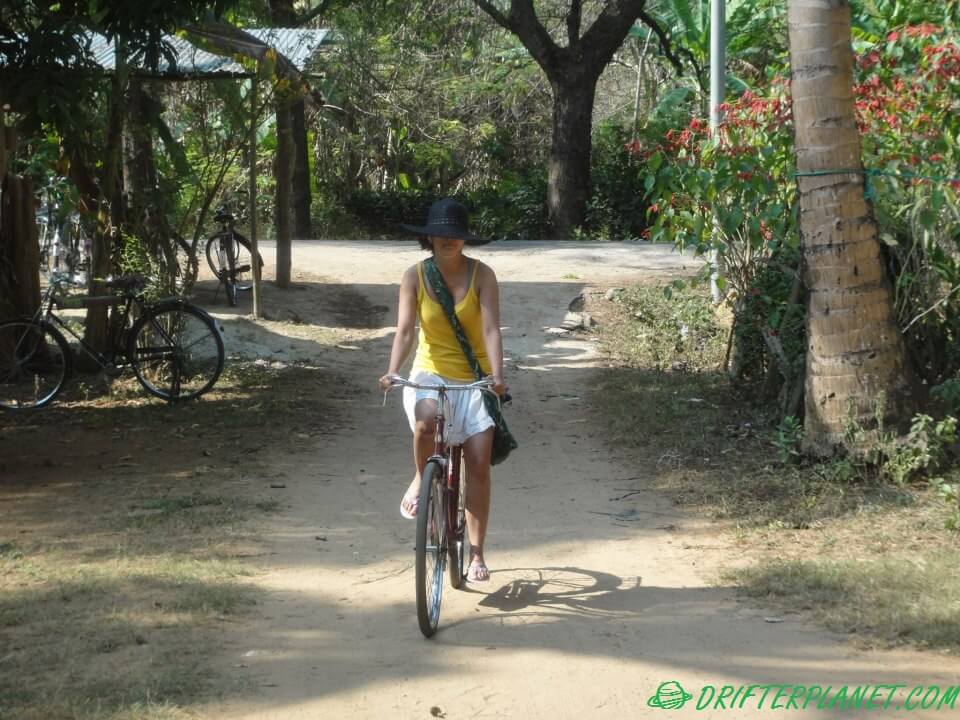 This Bicycle was my ride in Neil Island, the Andamans

Needless to say, I was a little slow and shaky in the beginning.  However, a few minutes and a beer later, I found my speed but much to my embarrassment, I injured my pride and my knee due to a not so graceful fall while descending down the entrance of a restaurant, Moonshine Café.  I was hoping no one saw but heard footsteps of someone walking towards me looking worried and he asked if I was alright.  In a fit of embarrassment, I pretended to be really injured and he helped me sit up and made me sit on a chair.  In the meanwhile, my travel buddy reached me and started laughing because he saw my amazing fall. Anyway, my fall led to a few conversations between us and a few travelers and soon many joined our table.

Where to eat, drink and party on Neil Island

Alcohol is very expensive on Neil Island and is difficult to get so our Old Monk rum which we were carrying from the mainland was a big hit. With limited options in Neil Moonshine became our favorite spot and we felt at home. 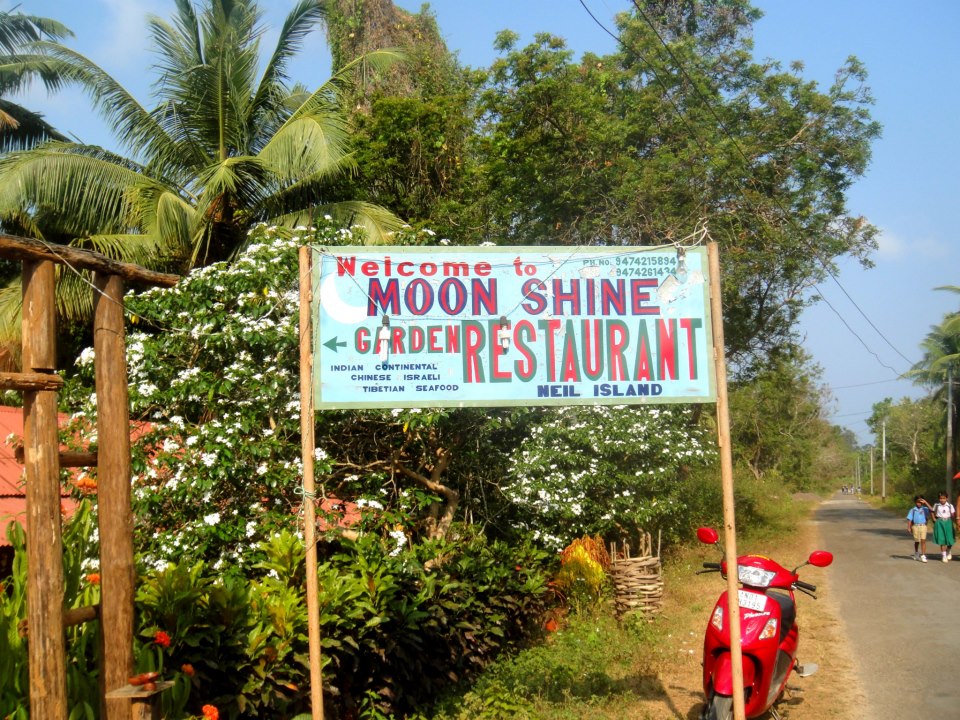 The owner of Moonshine Café, Sukumar Dash often joined us with a big smile.  A humble and simple man, we noticed how he took special interest in every customer’s needs and instructed his cooks accordingly. Sukumar is a proud owner of a karaoke machine which has a handful of English songs and mostly Bollywood music. For many people, this Karaoke machine was the only form of entertainment here post dinner on most of the days when almost the entire island would be fast asleep. I had some of the best meals here many styles of seafood curries – coconut crab curry, mustard fish curry, Bengali style prawn curry and malai kofta here. 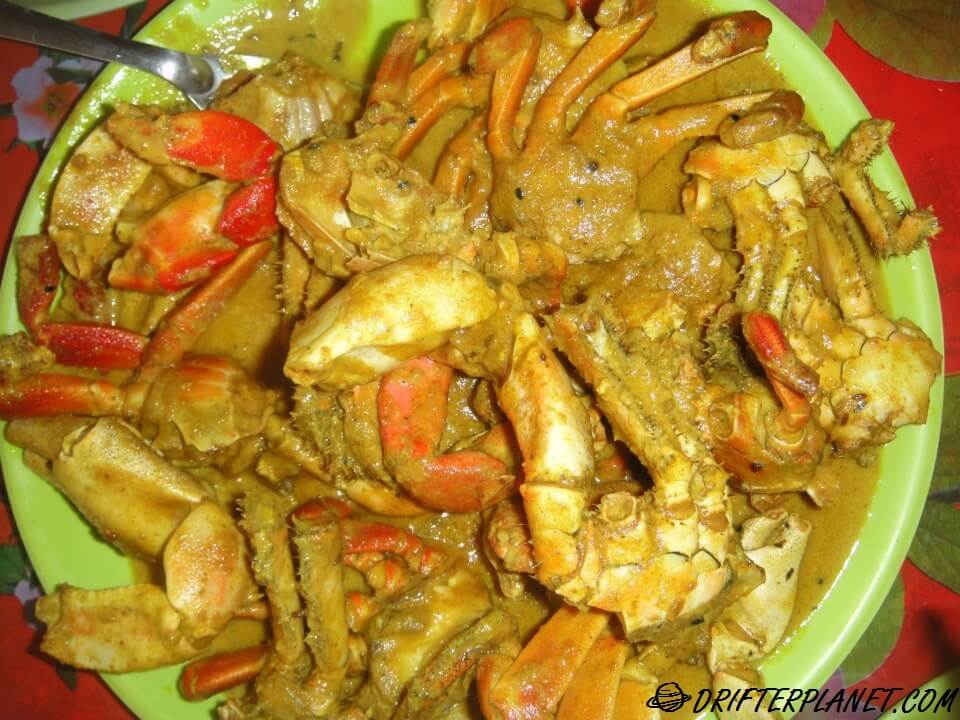 Since Neil doesn’t have a nightlife, Moonshine was the best place for beers, starters and food where we often met fellow travelers and divers. We also found another awesome restaurant called Chand in the main market area, which is a two minute scooty ride from Tango / Pearl park area. The food here is great too and so is the bhagsu cake, which we were surprised to find in this part of the country. We did try another restaurant (a name that I do not want to mention) but it was the worst meal that I had on this vacation. As mentioned before, life is a tad slow here. Based on this, we were prepared to wait for an hour anywhere we went for a meal, hence we usually ordered before we were hungry. 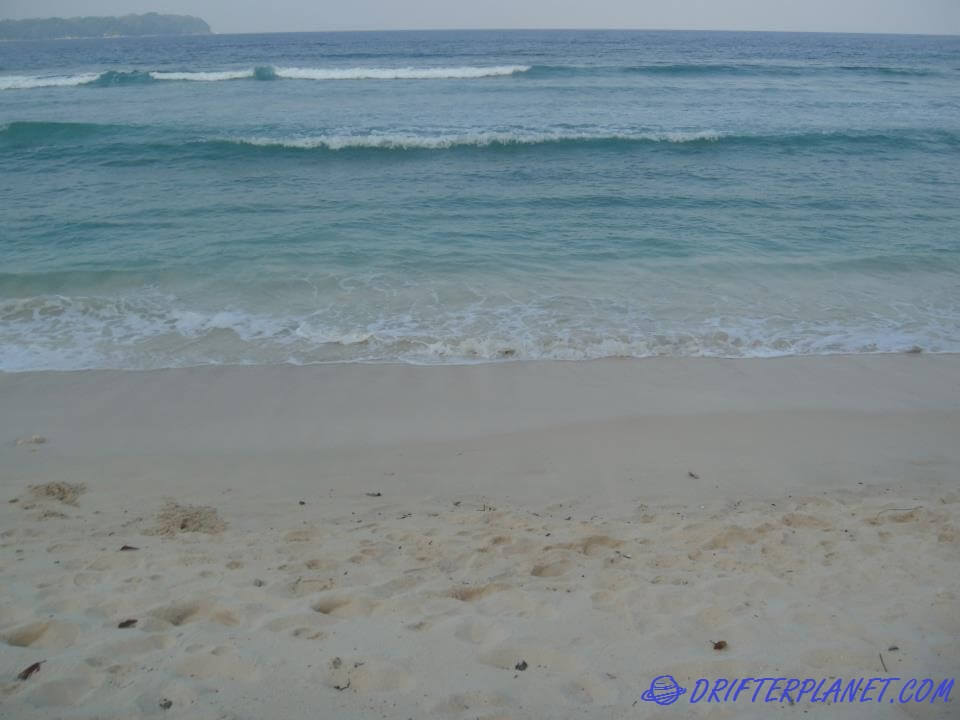 There are only 5 beaches on Neil Island:

We explored all the beaches but spent most of our time in Laxmanpur part 1. 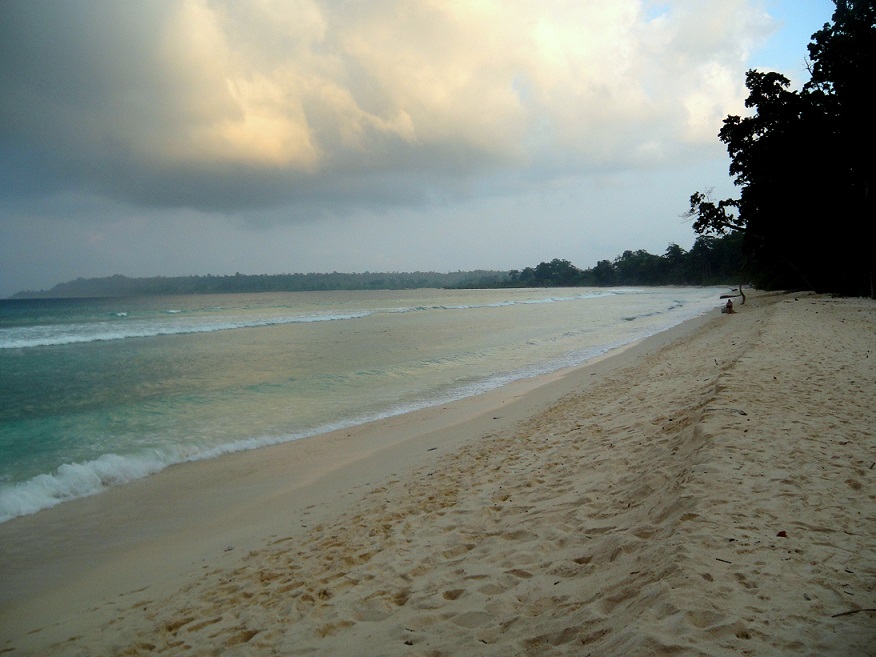 Laxmanpur 1 is the prettiest since it has a triangular spot with water on two sides and is known as “Sunset point”. 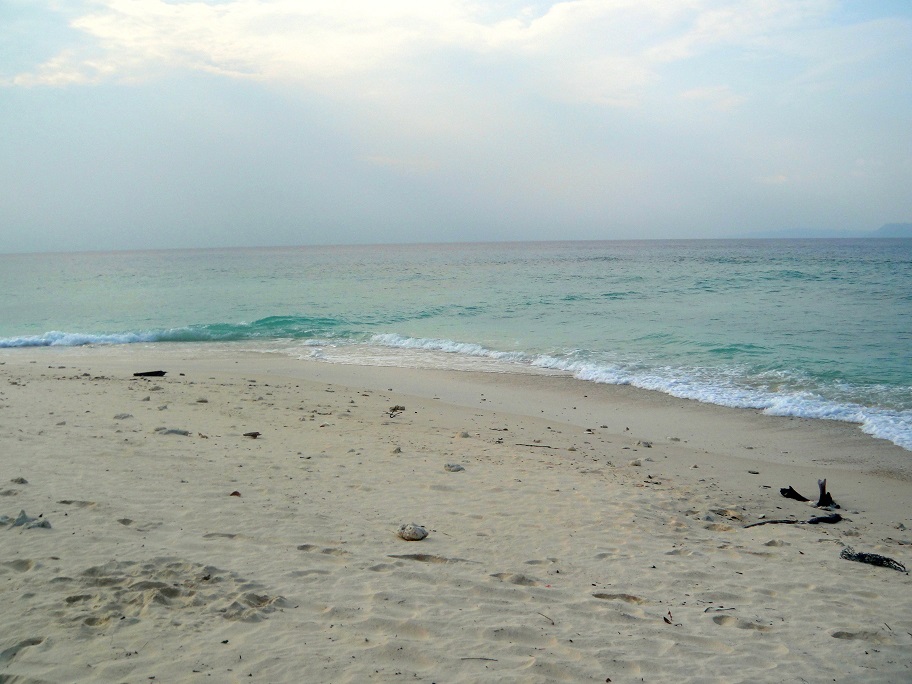 Tango and Pearl Park resorts are in Laxmanpur but you will need to walk towards Pearl Park to get to the main beach area. The beach is HUGE and the triangular spot is beautiful. This is also a white sand and blue water beach and great for a swim. 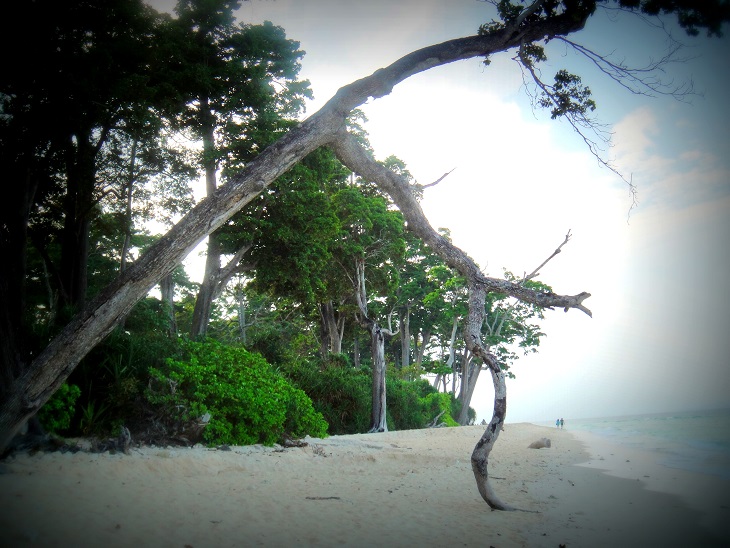 If you walk further ahead, there is a spot called Natural Bridge, which is a huge rock arch that divides laxmanpur 1 and 2. Laxmanpur 2 is nothing great and is full of dead coral. 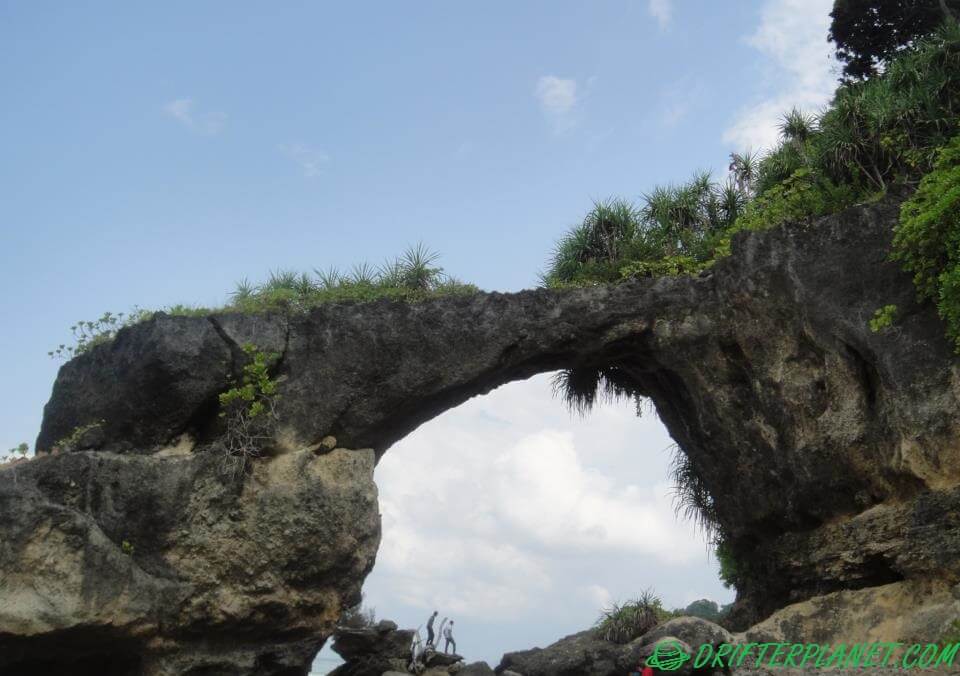 Bharatpur is also beautiful although a bit commercialized with snorkel options, glass boat tours, jetski, etc. It’s a also a white sand beach with beautiful blue water, good for a swim. The water is pretty shallow however so you will need to walk in water for a while till you reach a good spot. 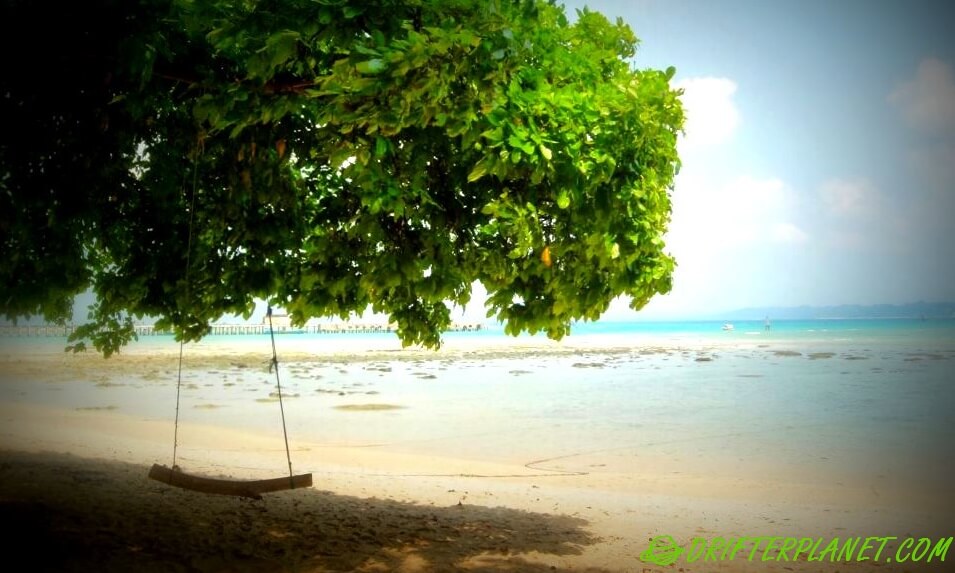 Ramnagar and Sitapur beaches are not white sand beaches and reminded me of Goa beaches. 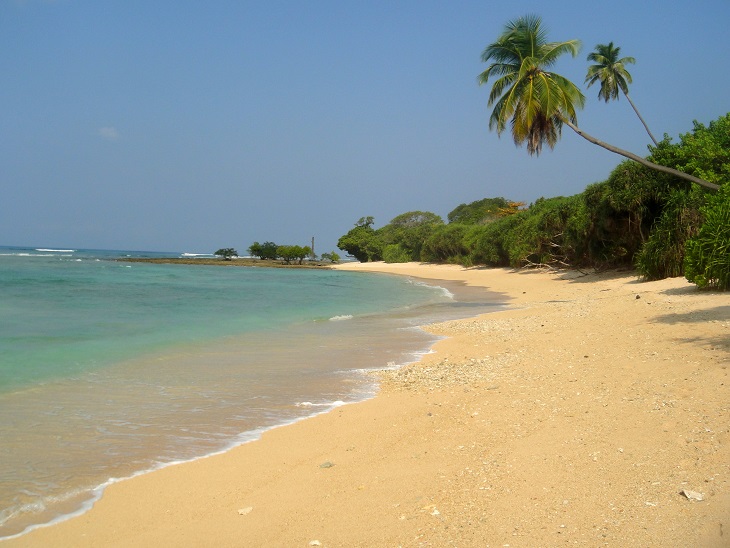 No one actually visits these beaches since they are not as scenic as the other beaches but they are nice and definitely worth a few visits.

Neil Island has only one dive shop in Moonshine café called India Scuba Explorers and they offer PADI courses. On our visit, we met Rob at Scuba Explorers – a very nice person. Also we did not dive there but we had heard he’s an excellent dive master. Rob had adopted an adorable puppy, called Sonja. 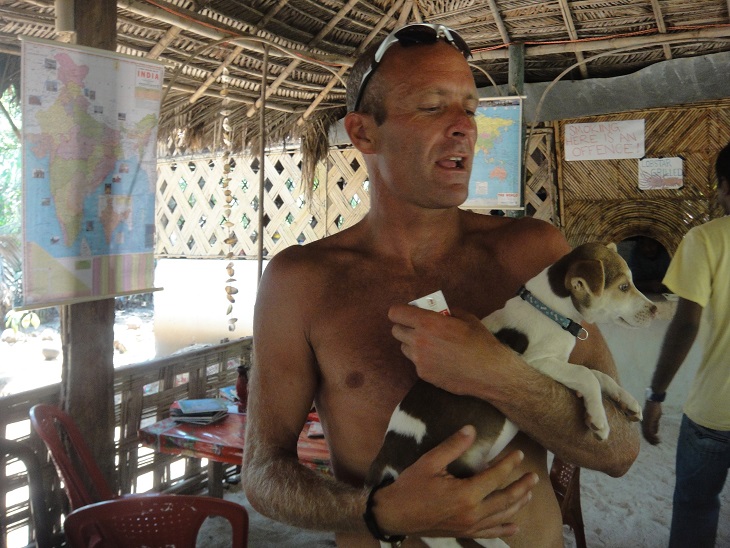 Rob and Sonja at Moonshine, Neil Island – the Andamans

Where to stay on Neil Island?

Neil Island has very few places to stay. I recommend you stay on Laxmanpur beach either Pearl Park or Tango. They will provide you with basic concrete rooms or huts with an attached toilets. Tango is cheaper with great staff however Pearl Park has a better beach area. Tango has beach facing rooms, Pearl Park doesn’t. Tango has some benches on the beach area where you can spend the entire evenings. There are some huts and rooms available in the market area and Bharatpur beach with shared toilets.

Please be careful – do not try to fly back to the mainland with dead coral or shells in your backpack.  You will get checked at Port Blair and will need to pay a fine. 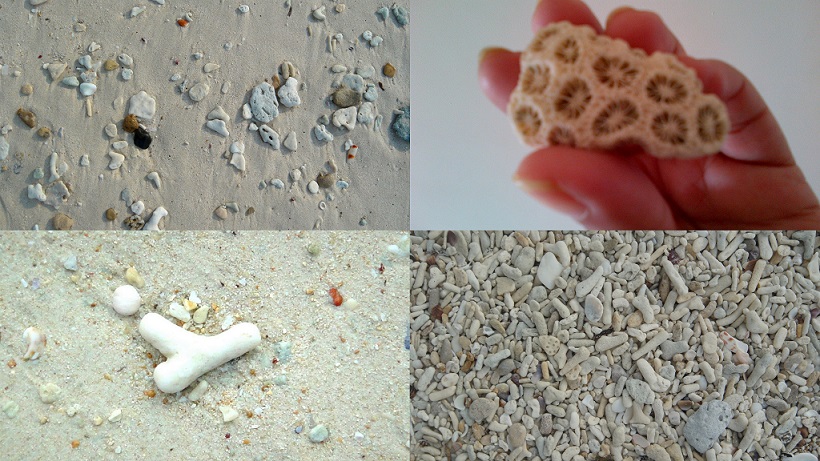 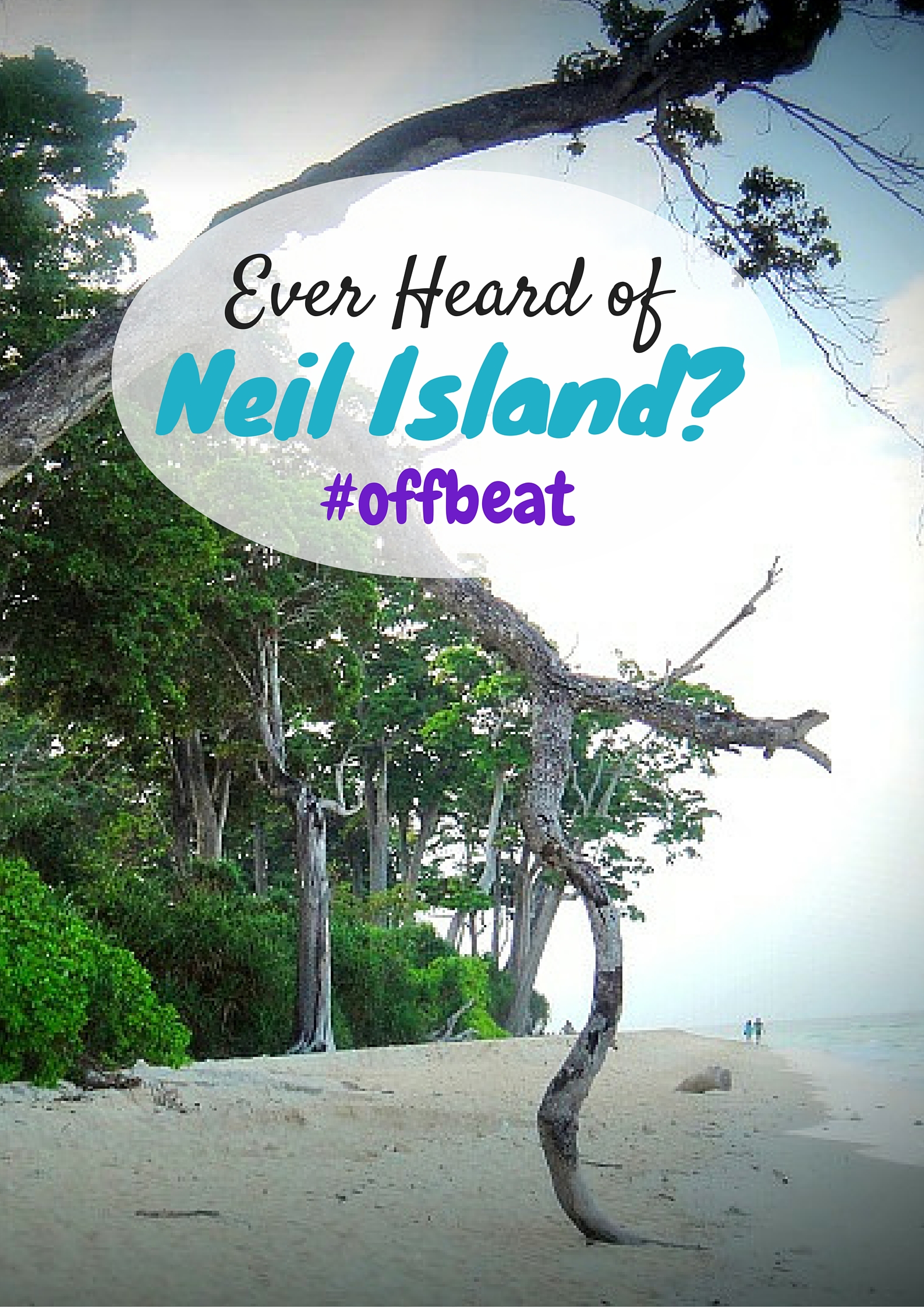 The Best of Havelock Island on a budget

Pasir Timbul – The Most Beautiful Beach I’ve Ever Seen

55 Best Islands in the World

Maya Bay – the best way to experience “The Beach”