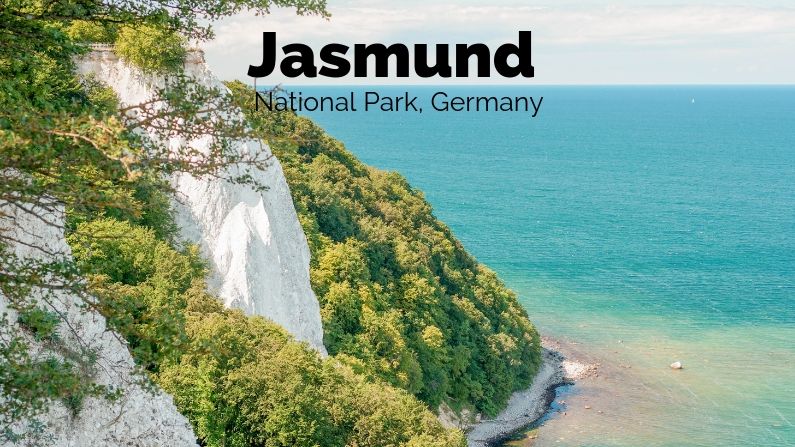 Jasmund National Park is on Reugen Island, which is the biggest island in Germany. It is on Germany’s Baltic Coast in Mecklenburg-Vorpommerns state. In Germany, the Baltic Sea is called the Ostsee and Reugen Island is called Insel Rügen.

Having lived in Germany for a while, I had no idea about this island. Even when talking about Germany’s beaches, most of the people mention Nordsee – or the North Sea. Not many people end up visiting Rügen Island, but those who do absolutely love it.

Jasmund National Park is famous for its dramatically high chalk cliffs. The chalk cliffs go as high as 160 meters above the sea level. The chalk cliffs are along the coast, so the chalk coast runs from Sassnitz via Lohme to Glowe. There is also a beech forest behind the cliffs. 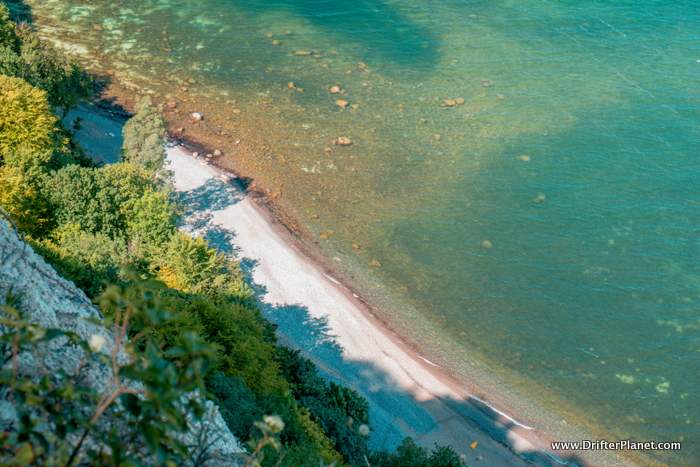 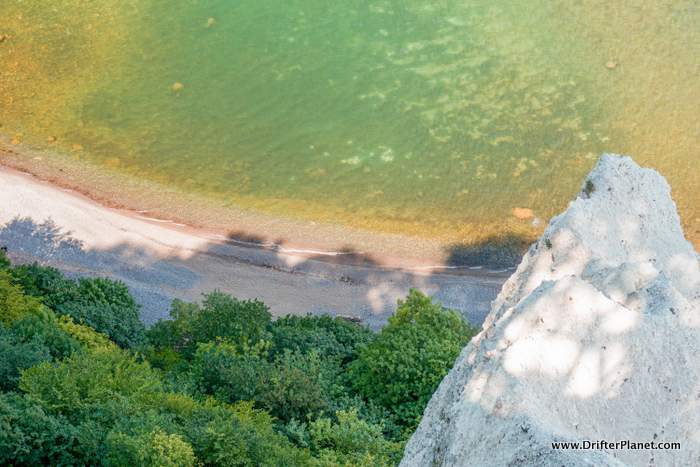 One of the Chalk Cliffs of Jasmund National Park along the Baltic Coast, Germany

The chalk cliffs of Jasmund National park are eroding continuously. Wissower Klinken, one of the most beautiful parts of Jasmund National Park collapsed in 2005 because of a landslide. Chalk being a porous and soft sedimentary carbonate rock, can not withstand aggressive storms.

How to Reach Jasmund National Park 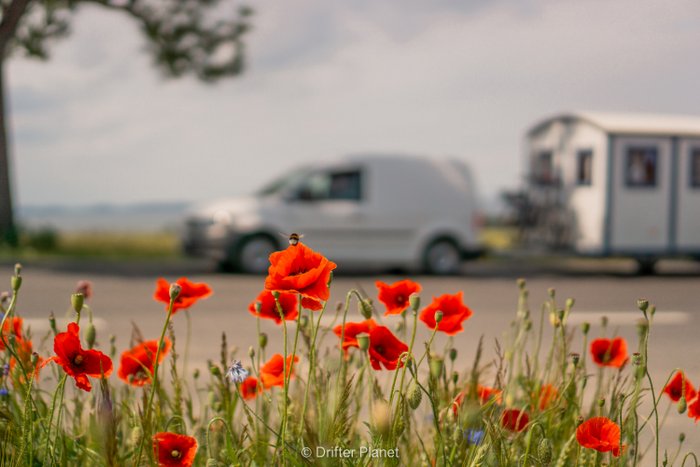 The easiest way to read Jasmund National Park is by road. Drive your own car or rent one to reach here. Here’s a search engine for cars where you can find cheap rentals.

We actually did this trip on our camper-van – check out these tips for Van Life Europe. If you’re thinking how we arrived here on our van if Jasmund National Park is on an island, then you should know that there is a bridge that connects Reugen Island with mainland Germany.

If you’re looking for a way to reach Rugen Island by train, then please note that the journey isn’t exactly easy or cheap. You have to first reach the closest town Stralsund and from there catch a train to Sassnitz. You can also take a train to Ostseebad Binz, but that is a little outside Jasmund National Park but on the Rugen island.

The thing is, if you’re traveling anywhere in Germany, it is much easier if you drive. The trains are expensive and sometimes you have to change many.

Trains make sense when you’re heading to a big city like Berlin / Hamburg / Frankfurt, etc. Check out our post about 5 amazing short road trips in Germany.

What to do in Jasmund National Park

At 118 meters above the sea level, Königsstuhl is one of the highest chalk cliffs in Jasmund National Park. Königsstuhl means “King’s Chair”. This spot is the most famous point of the entire national park.

Once you enter the Königsstuhl National Park Centre, you can climb the narrow granite staircase to a flat area that’s almost the top of the cliff. From here, you can get an amazing view of the Baltic Sea.

View of the Königsstuhl from the Baltic Sea

Honestly, if your motive is just to see and admire the King’s Chair cliff, I’d recommend you skip entering the Königsstuhl National Park Centre. You can’t see the Königsstuhl from there. For a free and faster option, see the next point. 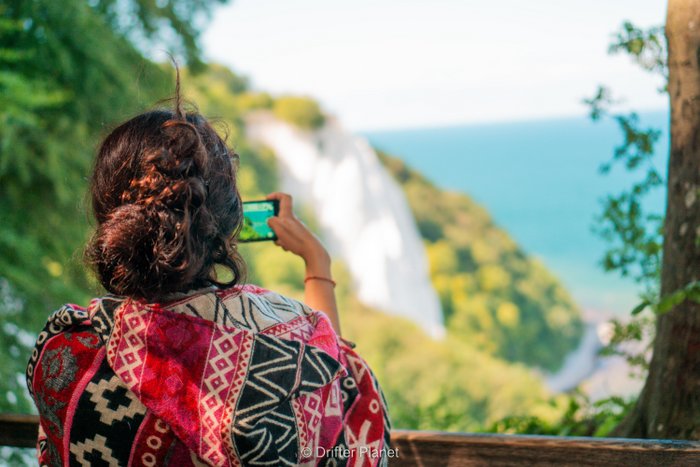 If you’re short on time (or money), I’d recommend you avoid going inside the Königsstuhl National Park Centre but head to Victoria-Sicht instead. There are many benches where you can sit and relax.

The viewing platform on Victoria-Sicht is pretty small. At one time just one person can stand and look. You can also spot the Königsstuhl viewing deck from Victoria-Sicht.

In case you want to click photos or create a video, then you should come here early. I remember I was here around midday and I stood on the viewing platform and clicked barely just five photos. When I turned around, I noticed there was actually a queue behind me. I couldn’t, of course, be shameless and hog this spot and let everyone else wait. 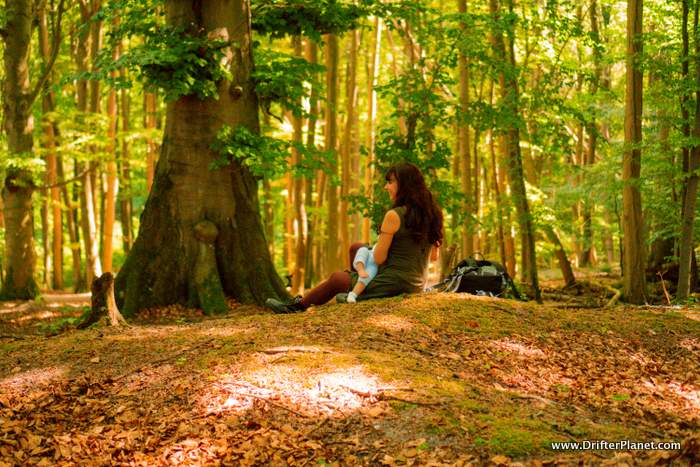 Sitting in the forest in Jasmund National Park

Jasmund Park’s chalk cliffs get all the attention but the Beech forest should not be overlooked. This particular forest is centuries old and is a UNESCO World Heritage site.

The forest inside Jasmund National Park has many trails, which can be explored by walking or cycling. We were here with our 7 month old baby so we decided to walk with her on the pram. 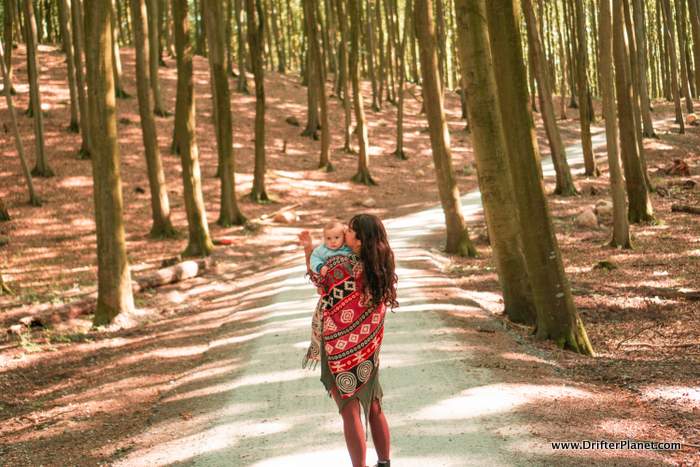 As you walk inside the forest, you will cross ponds and small lakes. You will also notice several patches of wildflowers, especially wild poppies. Of course, this totally depends on the season. We visited in the month of June.

4) Find a Wildflower or a Poppy Field 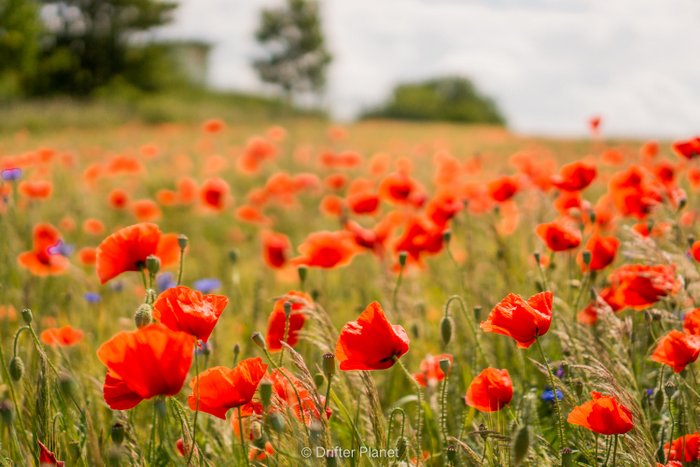 One of the first things that amazed us about Jasmund National Park was the abundance of wildflowers, especially poppies. We saw many poppy fields that looked stunning from a distance, like a sea of blood (eww but looked fab). 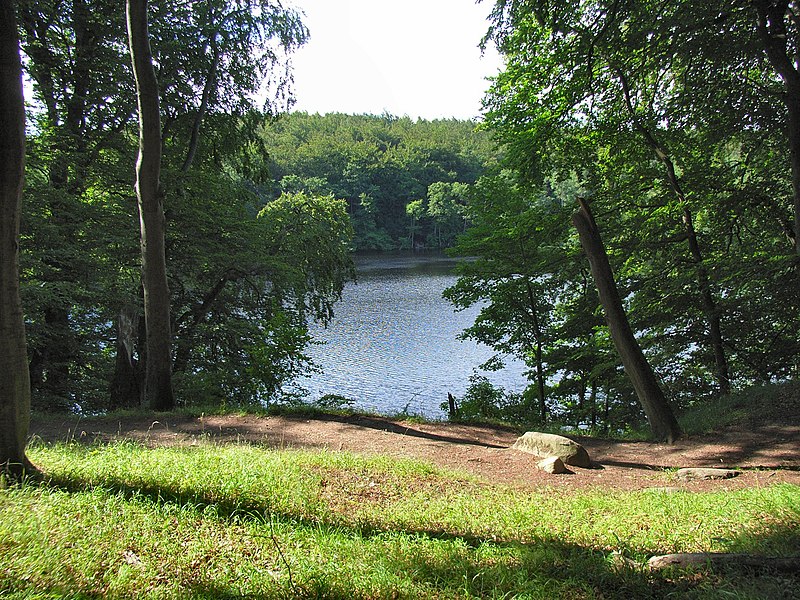 Herthasee is not very far from the Königsstuhl and we crossed it on our way back to Kruger Nature Camp from Victoria’s view. It is 170 meters long and 140 meters wide. This lake also has a Slavic hill fort – Herthaburg which was inhabited between 8th and 12th century.

I wasn’t very impressed with this lake and I think it is avoidable if you don’t have enough time. Of course in our case, if we had another few days and if our little baby wasn’t restless at this point, maybe we would have loved the Herthasee.

It is said that the waterfall at Kieler Bach is the biggest one in the entire Mecklenburg Vorpommerns state. We did not visit this waterfall but that doesn’t mean you shouldn’t. This point is on this list so that you are aware of this waterfall’s existence and you can include it in your itinerary. 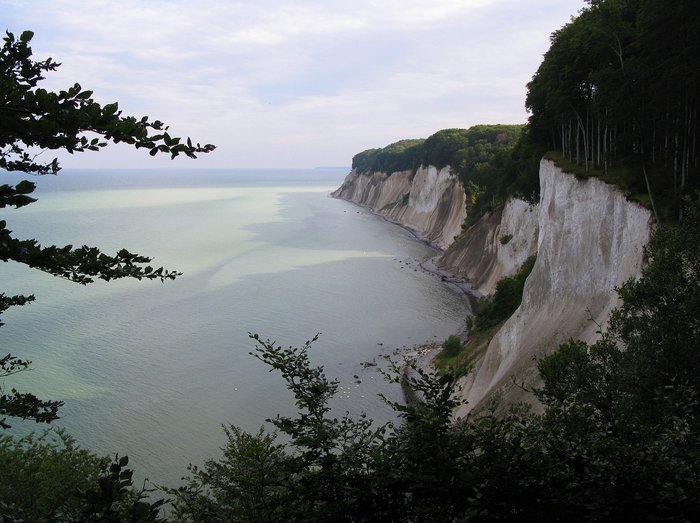 The Ernst-Moritz-Arndt-Sicht or viewpoint can be reached by getting on the path that connects Sassnitz with the Königsstuhl. You will also see the remains of Wissower Klinken on this path.

The Ernst-Moritz-Arndt viewpoint is towards the south of Jasmund National Park. I wasn’t able to find this spot on Google Maps but you will see it on local maps. You can find more information about this viewpoint here. 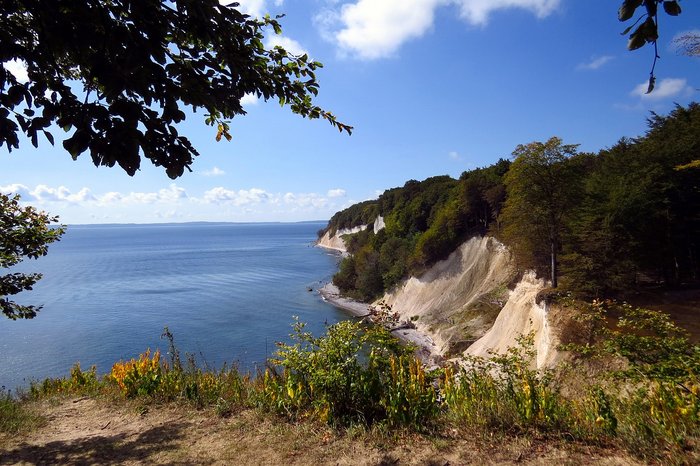 Where to Stay in Jasmund National Park 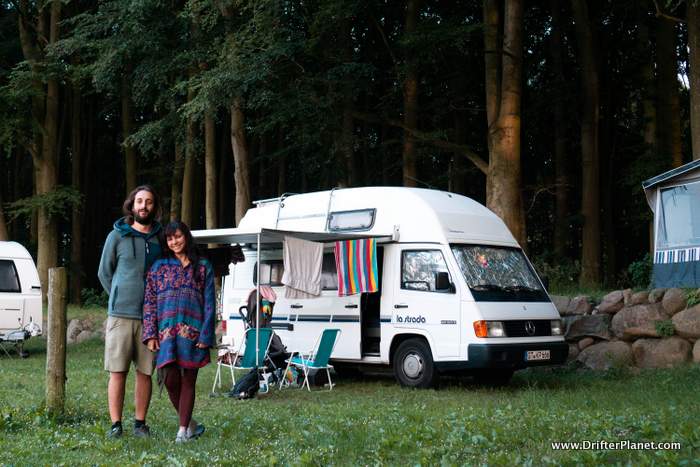 If you’re visiting Jasmund National Park on your camper van or car, then you should definitely book a spot in Krüger Naturcamping (or Kreuger Nature Camping in English). This place is HUGE with really big individual camping / van parking per van. Perhaps the biggest I have ever seen. Exactly as the name suggests, you’re in the middle of nature in Krüger Naturecamping. 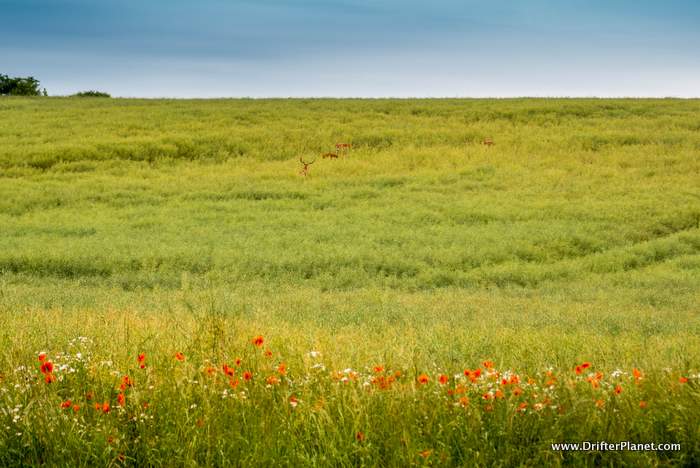 Early morning deer sighting in Jasmund National Park – do you see the antlers?

If you’re staying in Krüger, then you’re not far from Königsstuhl. You don’t even have to get out of the camping area to go there. There is a path that goes from the inside of Krüger Naturecamping that will take you to the Königsstuhl and Victoria-Sicht.

Krüger has a restaurant, kitchen area, play area of children and really good toilets that are new. I did not use the restaurant because it was closed when we were there. 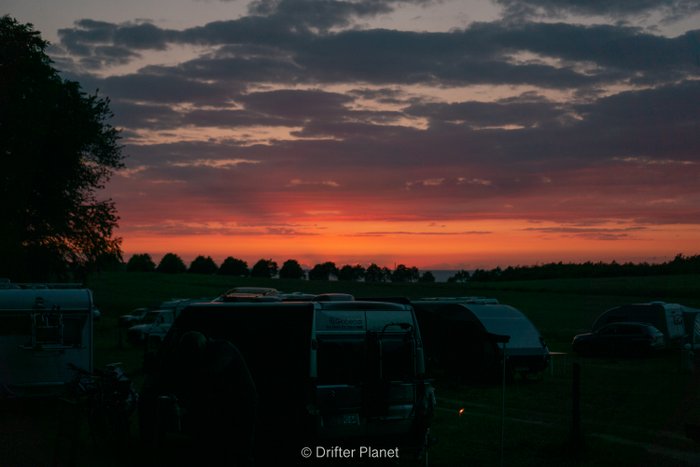 There is a good sunset spot that’s right outside Krüger Naturecamping. In order to find it, you just have to get out of the camping area and move on the right side. There’s a very small hill with a bench where you can sit. This bench directly faces west, so it is a perfect spot for sunset. 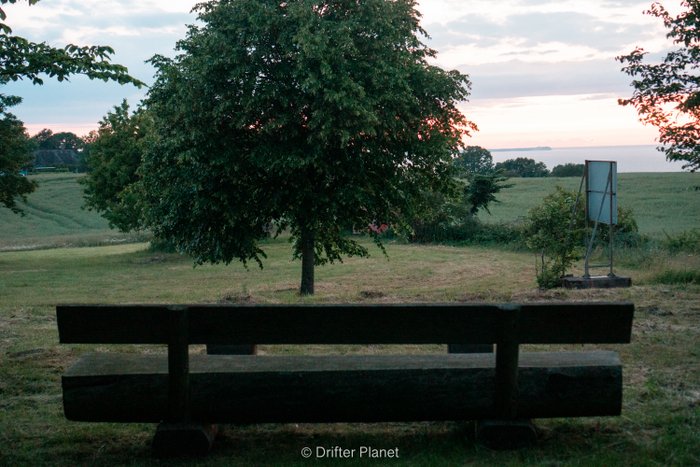 Click here to read reviews about Krugar Naturecamping on Tripadvisor.

Not interested in camping areas? No worries. Below are some more places inside Jasmund National Park. I haven’t stayed in these places personally but I have handpicked them for you based on the word of mouth and reviews by other travelers:

Have you ever visited Germany’s Baltic Coast?

We’d love your recommendations of other places to visit on Germany’s Baltic Coast. Leave a comment below and let us know.