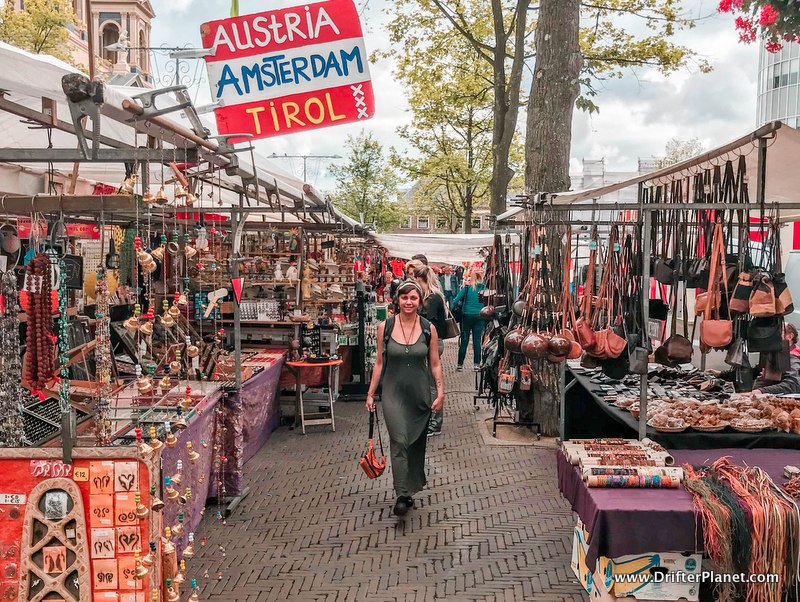 Imagine a flea market on the streets of Amsterdam with the backdrop of canals, a rustic tower and narrow buildings. Yes, this is what the Waterlooplein Market looks like – the best outdoor market of Amsterdam. (It is also called the Waterloo Market)

Waterlooplein Market is Amsterdam’s oldest flea market with over 300 stalls. Not just in Amsterdam, but it is one of the most famous markets in the Netherlands. You will see eye catching stuff from many different parts of the world in these stalls.

This market’s colorful stalls are lined up next to a canal and the Amstel river. You will also see the rustic Munttoren (Mint Tower) in the background. 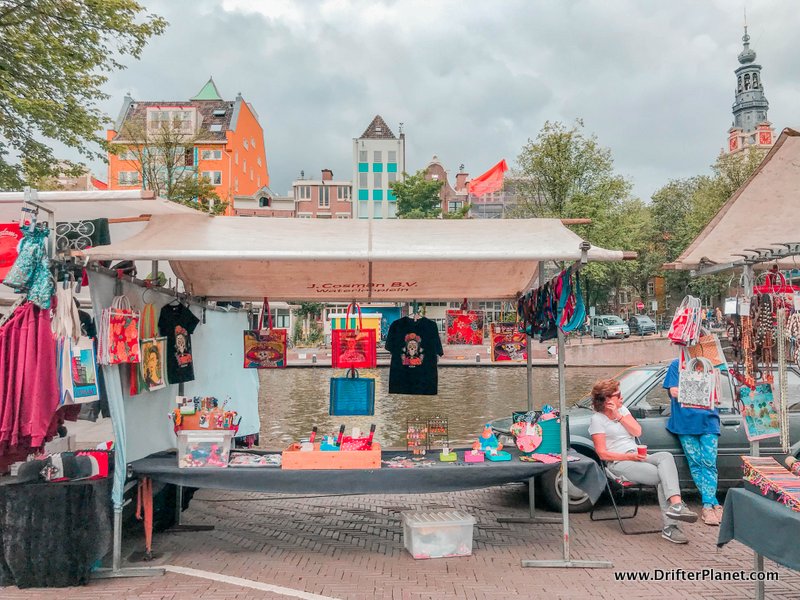 Waterlooplein Markt in Amsterdam with canal and Munttoren in the background

Shopping isn’t the only reason why I urge you to visit this flea market in Amsterdam, but an opportunity to experience the sights. Let the sounds, chatter, atmosphere and the liveliness of the Waterlooplein Market charm you.

I highly recommend including this amazing flea market in your Amsterdam itinerary. The Waterloo Market reminds me of the hippie flea markets of Goa. Note that if you’re planning on spending a weekend in Amsterdam, this market is closed on Sundays, so be informed and plan well.

What to Expect in the Waterlooplein Market 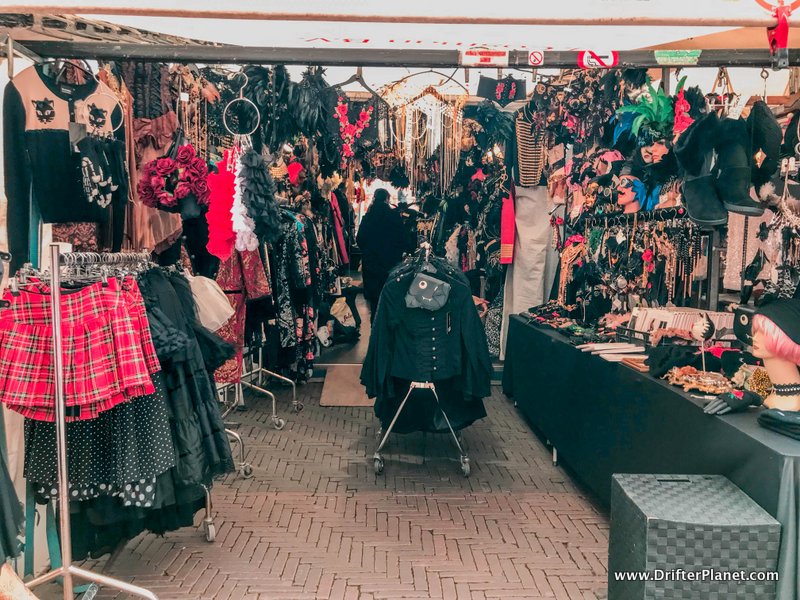 Clothes in Waterlooplein Market in Amsterdam

If you like vintage stuff and unique handmade items, then you’re going to love the Waterlooplein Market. You will see stalls with old books, apparatuses, steampunk and hippie clothes, old records, rare antiques, cameras, jewelry, leather goods and a lot of other crazy stuff. 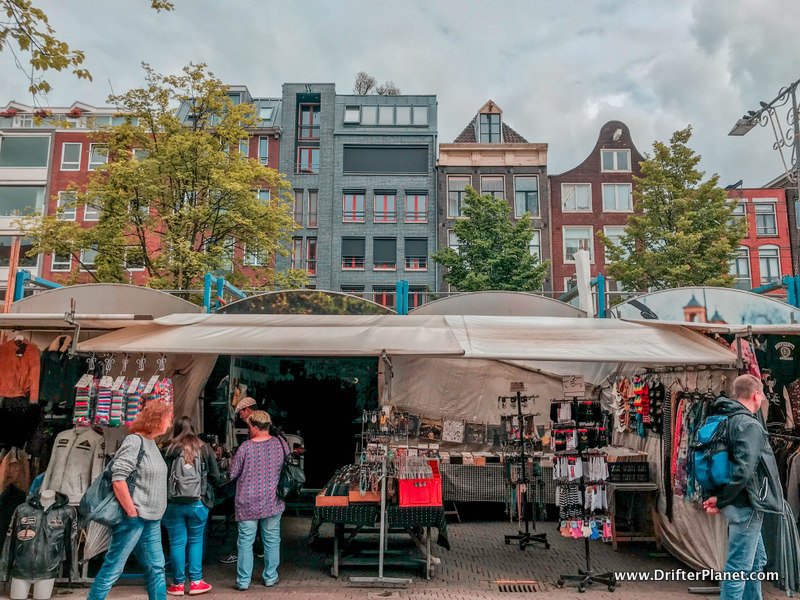 You never know what lost treasure you find in the Waterlooplein Market. As per their official website, you may just come across an unidentified Rembrandt painting if you’re lucky, or even Lennon’s old guitar.

Eating at the Waterlooplein Market 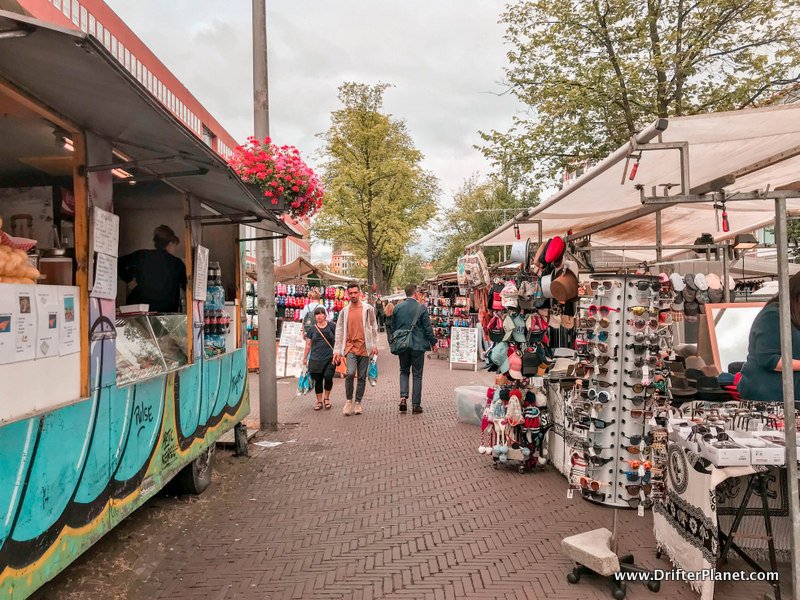 Waterlooplein Market isn’t just about buying things but you can find something to eat and drink too. Foodies will love to know that there are food trucks in the Waterlooplein Market too! So, you can come here after a crazy party night and eat the perfect hangover breakfast here. Check out our ultimate Amsterdam nightlife guide too.

If you want something more than just a snack or sweets, eat italian food at Piadina Factory food truck. Not only can you find authentic Itanian food but also italian drinks like Sanpellegrino fruit sodas.

As per the Thrillist, you should definitely try the giant spring rolls from Vietnamese Loempia food truck at the Waterlooplein Market. For more information about the current restaurant and food trucks in the Waterloo market, check the official market website.

History of the Waterlooplein Market

The location of the Waterlooplein Market was once the Jewish Quarter in Amsterdam. The Leprozengracht and Houtgracht were filled in 1882 and the Waterloo Square came into existance.

It was then that the city decided that the Jewish merchants had to move their shops out from the Jodenbreestraat and Sint Antoniebreestraat to the Waterloo square. Back then, the market was open everyday except Saturdays (and currently it is closed on Sundays).

We all know the horrible history of the Nazi regime during the World War 2 time, of course the Waterloo Square was effected back then. This place being a very obvious Jewish quarter, was targeted by the Nazis and the residents were sent to the concentration camps. The market had completely disappeared by 1941.

After the war, the market emerged again due to the scarcity of goods in Amsterdam. However, this time it was a general flea market instead of a jewish market.

In the sixties and seventies, the Waterlooplein Market became a hippie market. Some stalls were set up by traveling hippies who sold their stuff and the others were by locals who cashed off to the hippie trend. Many says that that was the best and the liveliest era of the Waterloo Square! 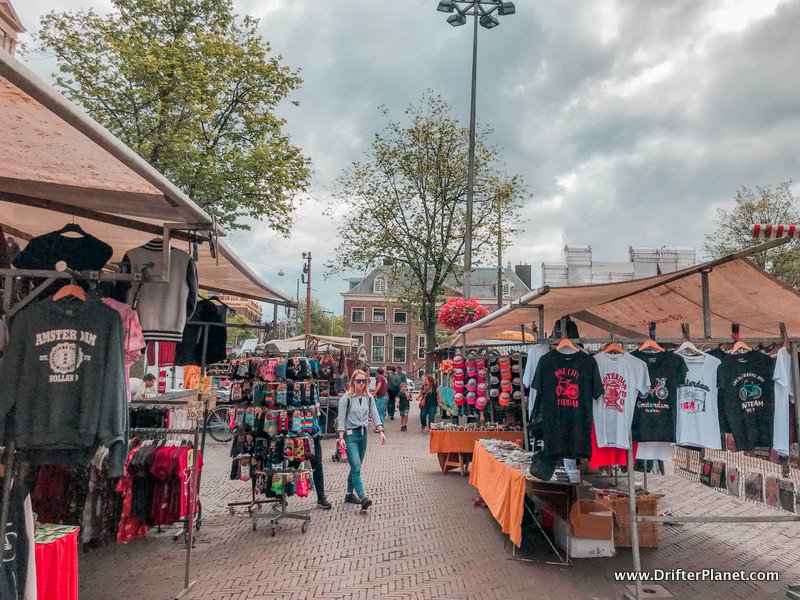 If you have an Amsterdam public transport card, then you can arrive here on Metro or Tram very easily. Waterlooplein Market has its own Metro station and is serviced by Metro 51, 53 and 54. Look for Waterlooplein metro station.

BTW: For information about Amsterdam’s public transport, check my post with top travel tips to Amsterdam. This post has a lot of money saving tips and gets updated frequently because I visit Amsterdam often.

The nearest tram station is het Stadhuis – which is the city hall. You can also arrive here on tram 14 from Amsterdam Centraal, or trams 1, 2, 5 and 13 from Dam Square (Magna Plaza).

It is also possible to reach the Waterloo Square on your car. [Though I highly discourage you to drive one in Amsterdam because walking, cycling and public transport will take you everywhere much faster and easier]. There is an underground parking area at Valkenburgerstraat 238 (click for Google Map coordinates) and it costs 3.5 EUR per hour. 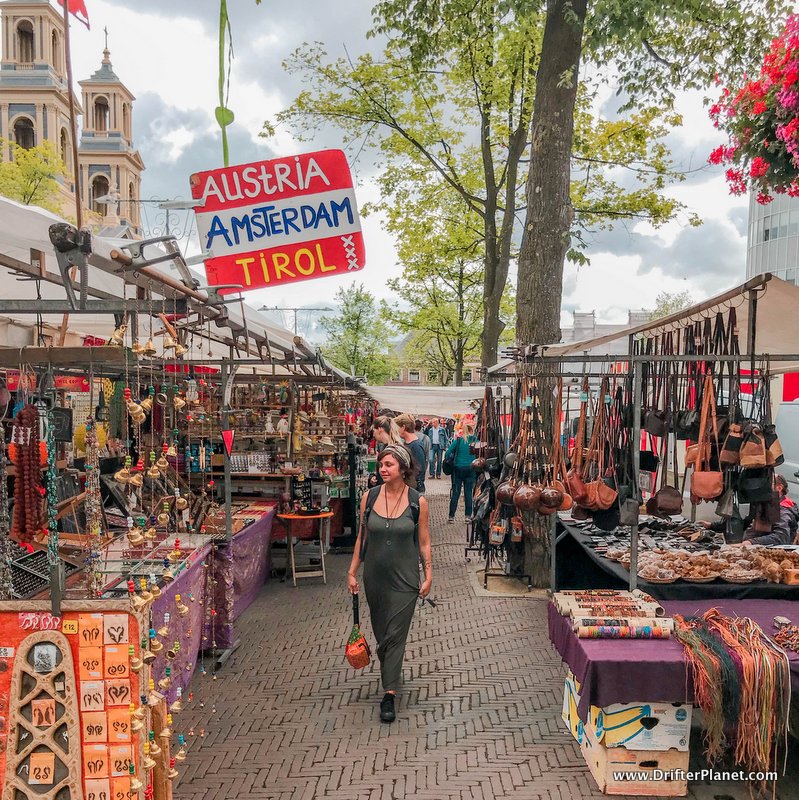 The Waterlooplein Market starts at 9 am and ends at 5 pm from Monday to Saturday. It is closed on Sundays. Even though it starts at 9 am, I noticed that some people actually set up their shops and stalls much later.