Kheerganga – My Favorite Trek in the Himalayas 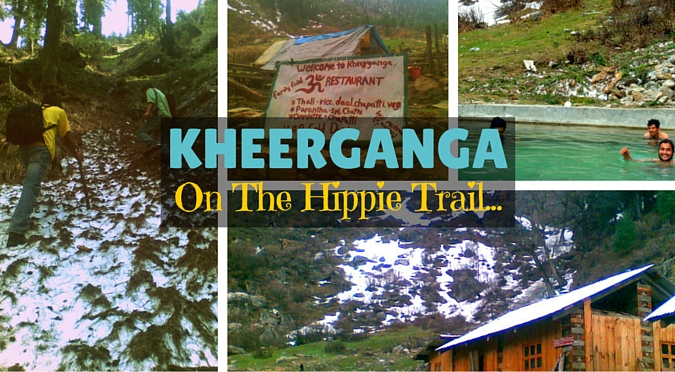 Have you ever visited a place that you wished would remain a secret forever?

Kheerganga was one such place for me.

A trek so beautiful that the physical workout felt like a picnic.

A destination so picturesque where it felt like I was in the land of “Heidi.

A dreamlike natural pool surrounded by snow but warmed by hot springs.

Was I dreaming? Maybe!

With its ethereal viewpoints, cute villages, lovely locals and good vibes, the magic of Parvati Valley pulls me towards itself at least once every year.

A few years back, one such journey resulted in a trek to Kheerganga. Back then, none of the people I knew had heard of it or had been to this place. The realization that there was no mention of this place on Lonely Planet and only a one liner description on WikiTravel ended up fueling my excitement to embark on this journey.

From Paharganj to Kasol

On a late Thursday evening of warm April, I boarded a taxi from Paharganj to Kasol with 5 other friends to kick start our trip. 550 KMs through the hills and 12 hours later, we were in Kasol. Once a quaint little river side town, Kasol has now become a jam-packed tourist destination. I prefer to head to one of the nearby villages and skip Kasol entirely.

Upon reaching Kasol, we stopped for a quick brunch at Sasi restaurant and headed off to Tosh. With no roads inside the village, Tosh has still managed to retain its otherworldly charm. It was not our first time in Tosh but we couldn’t help gasping when we caught the first view.

Tosh was our base for this trek. The agenda of our first day was nothing but rest and acclimatization. However, there’s no stopping of curious minds and we ended up spending the entire day walking around on narrow paths within the village, playing with goats and sitting with locals. 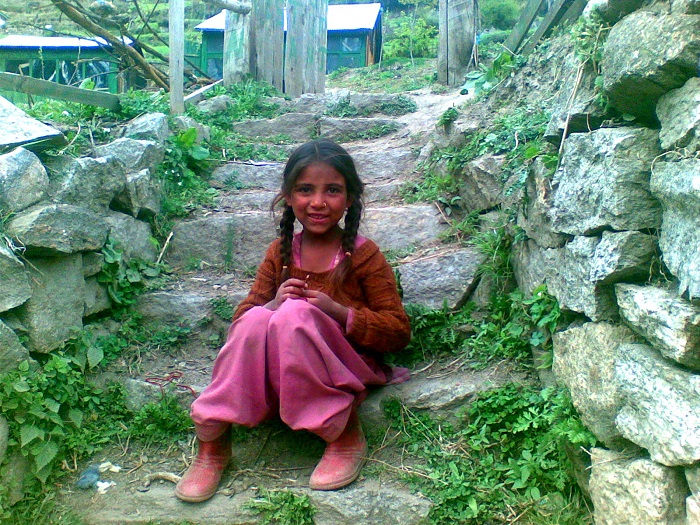 Tosh is one of those few places where simpleminded locals sit and smoke chillums with their families after a long day’s work. After all, they are surrounded by magical herbs that grown in plenty around them – probably one of the most potent and cleanest in the world as mentioned in one of Amsterdam’s coffee shops.

After an unplanned late night (which wasn’t a good idea), we woke up at 5 am to start our trek. Somehow, none of us were hungover or sluggish – was it the magic of the Himalayas? Maybe! We left our bigger backpacks back in our inn and carried a super light overnight backpack instead.

Suggested: A detailed guide for treekking to Kheerganga

The main path to Kheerganga starts from Barshaini from where it’s an 11 KM trek. Barshaini is 3 kilometers away from Tosh but we asked a few locals and took a trail that shortened our trek by 1 KM that started from Tosh itself instead of Barshaini. 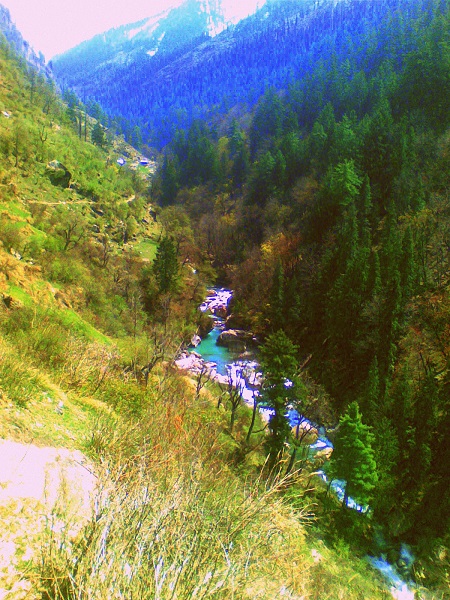 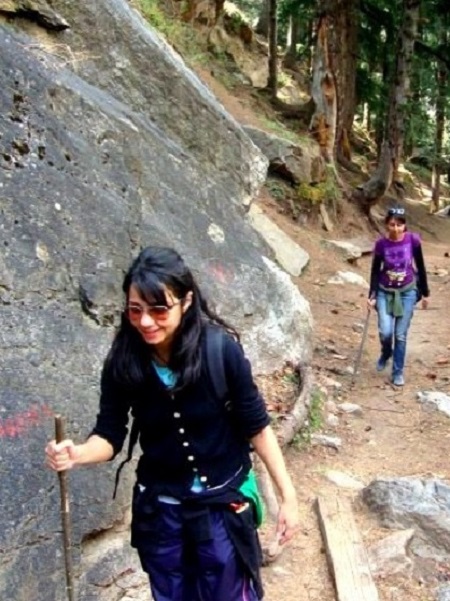 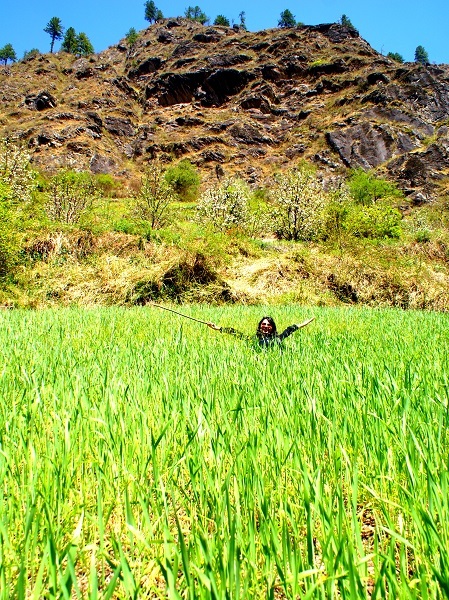 The first few kilometers were hardly a climb. Our trail was through lush farms, small hills and villages along the Parvati River. We couldn’t help but stop on many points to let the beauty of our surroundings sink in. With not a single soul in sight; we felt we had taken a wrong way until we reached the first village. Unlike Triund trek – we were the only ones on this trail.

The first village where we stopped, Rudra Nag, was near a waterfall. This is where we decided to take a little break and eat Maggie noodles. 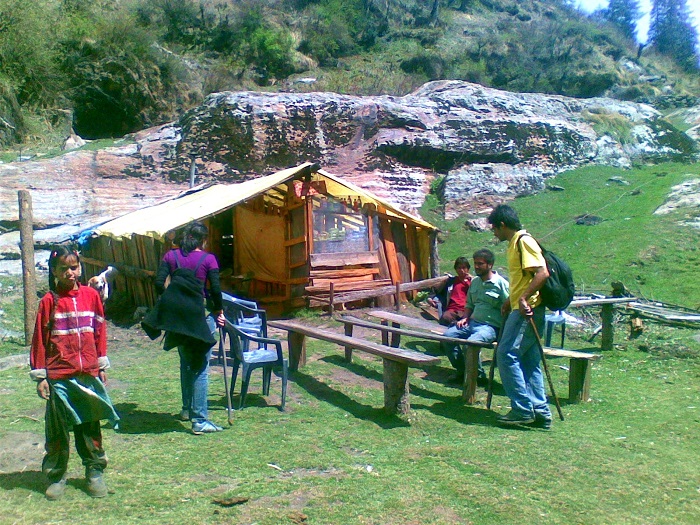 Beyond Rudranag, the woods became dense and the path became steeper. 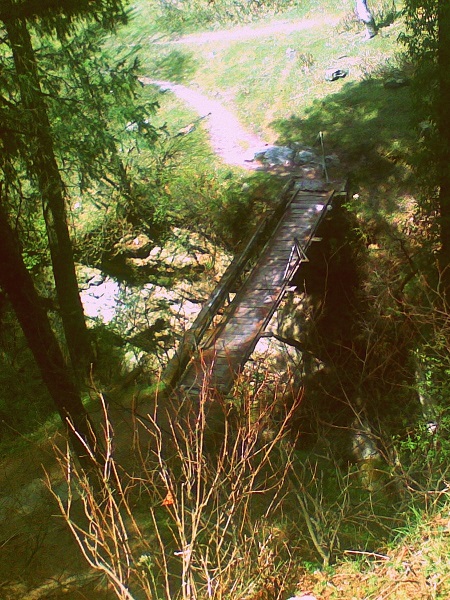 Narrow Bridge on our way to Kheerganga 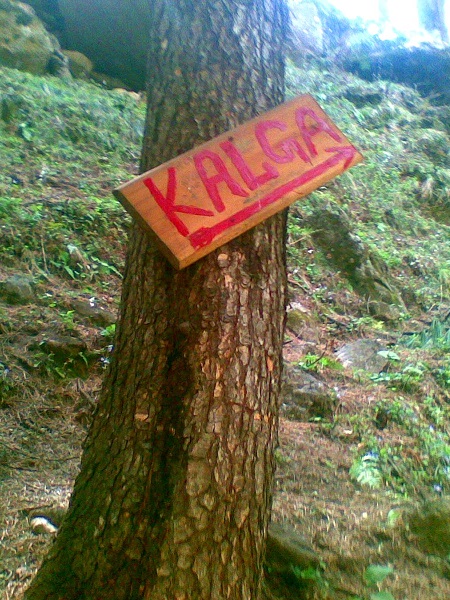 A signboard for Kalga on the way to Kheerganga. (Easy to reach from Kasol) 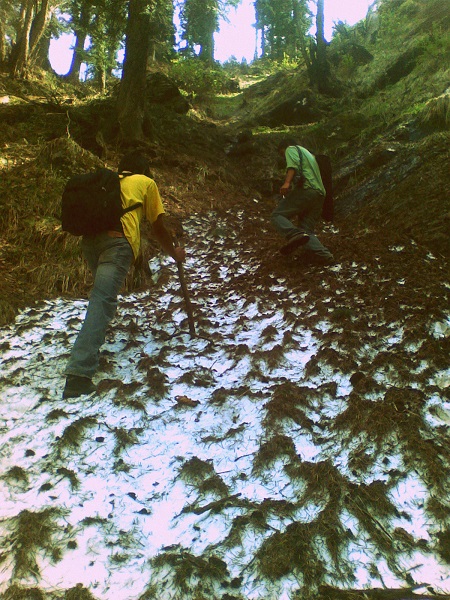 A little snow patch on our trek to Kheerganga

We crossed a fragile looking narrow bridge one by one and reach a signboard that arrowed towards Kalga village. There were no other markings but we knew Kheerganga was towards the other side of the signboard. 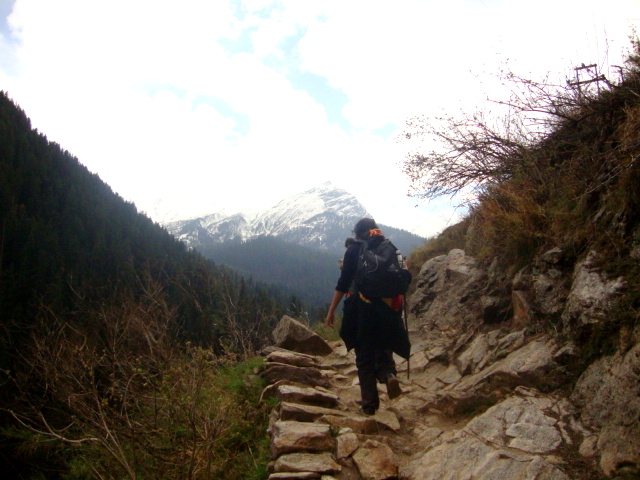 Trek to Kheerganga – This is me

The last part of the trek demanded a strenuous climb. It was at that moment I asked myself – “how much more can I climb in one day?” Strangely, right after that thought, all of a sudden I came across a sign that said “Welcome to Kheerganga”.

We were finally in Kheerganga! 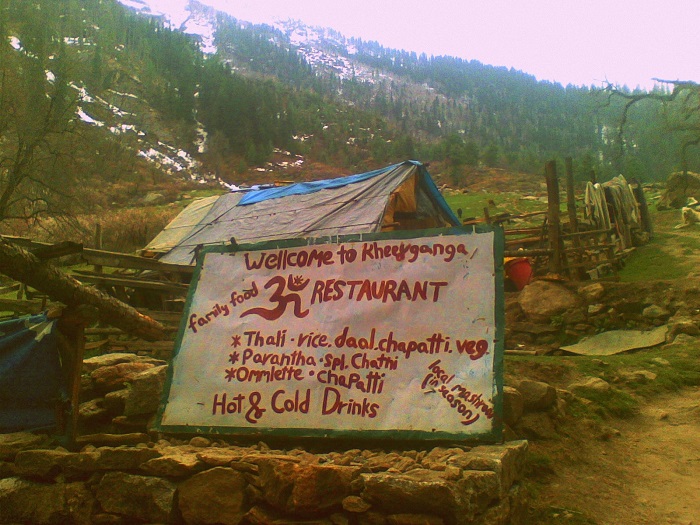 It was a green patch that was lightly slanted and surrounded with mountains that were covered with snow. There were some snow patches in Kheerganga too! 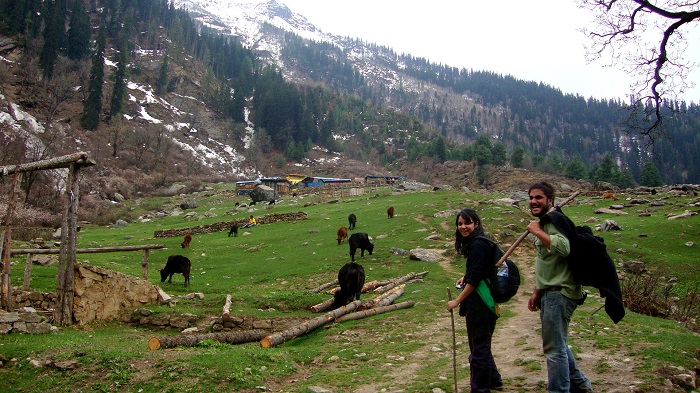 Kheerganga is a spiritual site where Lord Shiva is believed to have meditated for 3000 years. There is a little pool on the highest point here with warm spring water. The water from the hot springs is believed to be “holy” with healing properties. 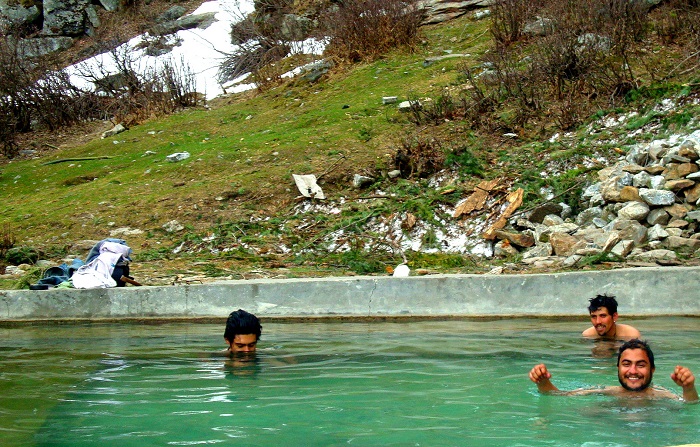 Natural Pool of Kheerganga heated by Hot Springs. Do you see that little snow patch next to it?

The tiny pool of Kheerganga is what the village has been named after – which roughly translates into milky water of holy nature with reference to Ganges River.  This pool is divided in two sub pools with one section for men and the other one for women.

The best part? A blissful feeling of being immersed in warm water with mountains around that were covered with snow! I’m not sure how many hours we spent in that pool but it was enough to suck out the tiredness of the trek.

For INR 60 per person, we found an inn to spend the night. This inn was next to the hot springs where the insides were kept warm with fire. However, nothing could keep our bodies warmer than our dear old Old Monk rum. 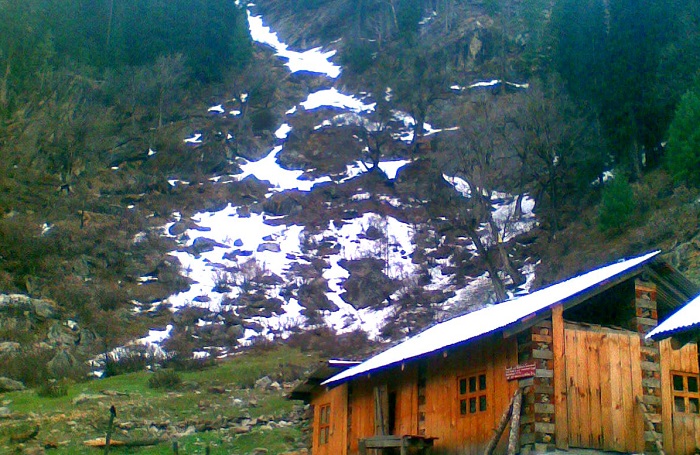 Our Hut in Kheerganga

That evening, we saw the most magical sunset with many shades of orange in the sky that made the snow caps glow like fire. 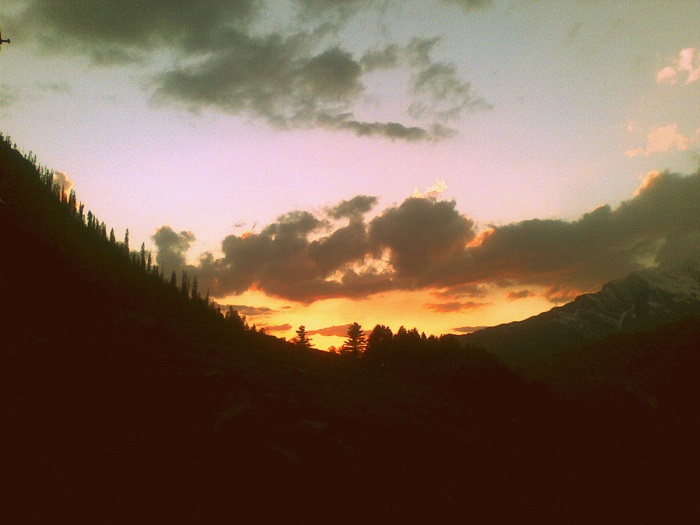 Next morning, we went back to the pool for another dip before starting our trek back to Tosh. After a big breakfast, it was time to say goodbye to Kheerganga. While the climb up took between 4 – 5 hours, the way back was only 3 hours. As always, there was a sense of achievement after finishing this trek.

Are you planning on trekking to Kheerganga too? Please keep these few things in mind:

1) You can reach Kheerganga by catching an overnight Himachal Tourism bus from Delhi to Manali but get off at Bhuntar. This will cost you 1000 – 1200 and the buses are comfortable. From Bhuntar, head to Tosh or Manikaran and acclimatize for a day and start your trek from here early morning.

2) Don’t carry heavy backpacks. Pack smart and light. You can check this post about best backpacks for hiking. Leave your luggage in Tosh or Manikaran and only carry light overnight backpacks with a torch, a pair of flip flops, swimsuit, small money, toilet paper and a very thin towel. Kheerganga is cold even in summers so carry something warm in your backpack.

3) Don’t try to trek up and back from Kheerganga in a day unless you don’t mind getting lost in the mountains in the dark and becoming a treat for a Himalayan bear.

4) Don’t leave your trash anywhere. Don’t be an annoying “noisy” tourist. Respect nature, the serenity of the mountains and the locals. 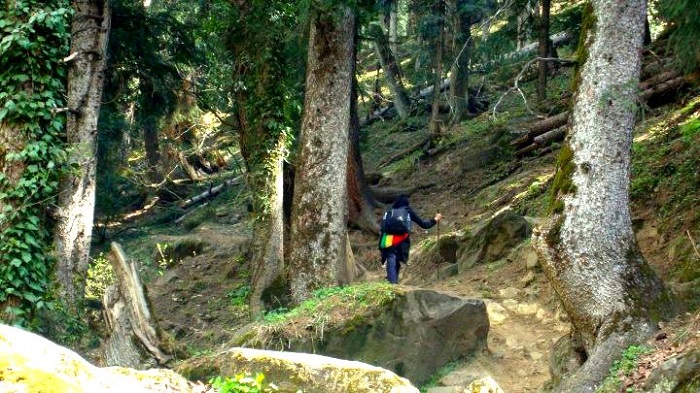 Kheerganga Trek was my best trekking experience. What was yours?

Dharamkot – a hippie village in the Himalayas 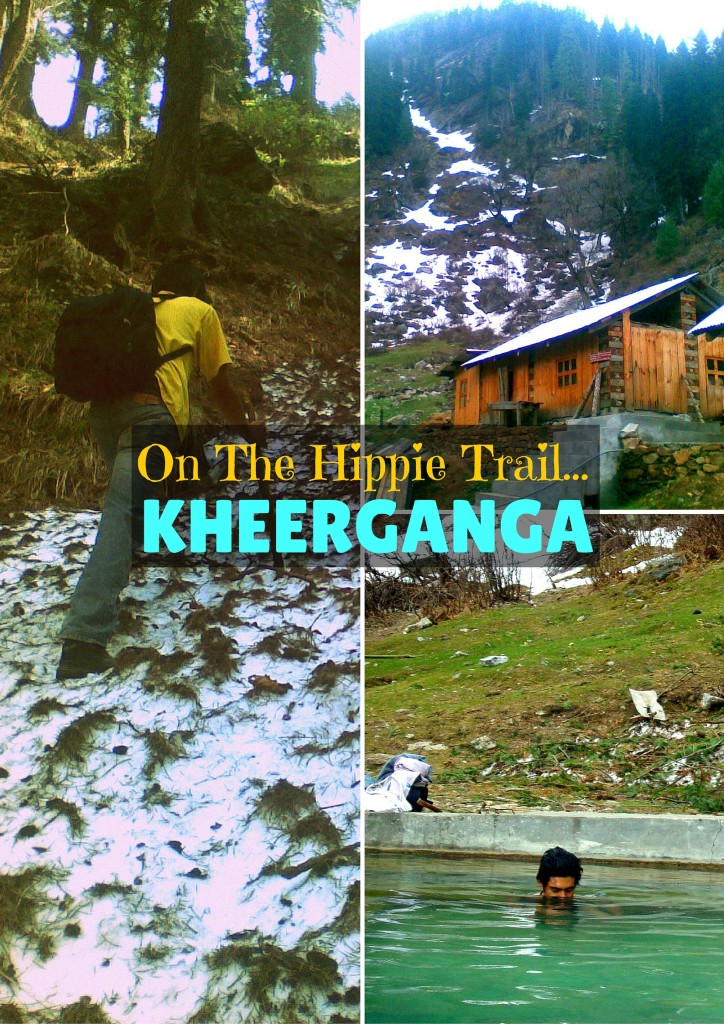