Falling in love with Westport, Ireland’s Loveliest town on the Wild Atlantic Way

Dublin may be your first stop when you visit Ireland, but it is mostly in smaller towns that you will experience the warmth of Irish culture.

Small but active communities, charming cottages, and old-school Irish pubs are some of the many reasons why you may just want to live in one of these smaller towns in Ireland. One such town where I urge you to visit is Westport in County Mayo, which has also been incidentally been voted as the best places to live in Ireland. 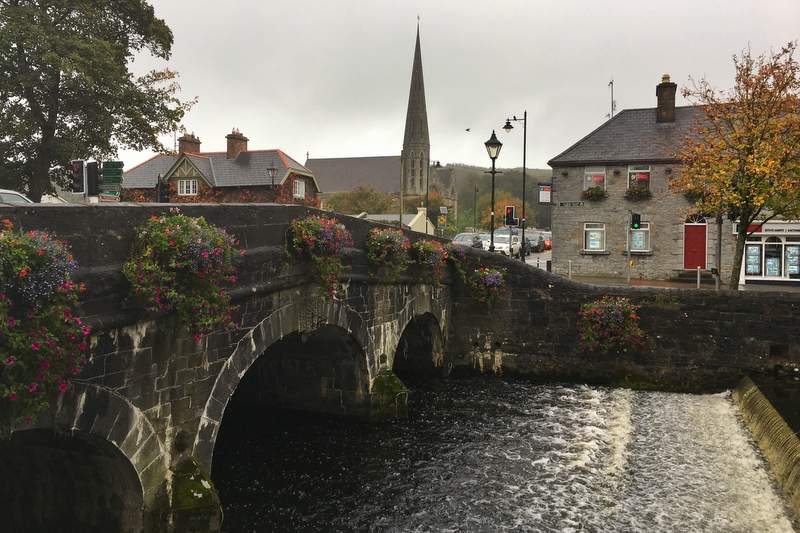 For those who have not seen my previous blog posts about Ireland, here is a quick catch-up for you – Westport is the gateway to Ireland’s Mayo County and is usually the first place that travelers visit while exploring Mayo. It is a heritage town on the West Coast and on Ireland’s Wild Atlantic Way. I visited the Mayo County after spending a few days in Killarney, which is famous for the Ring of Kerry.

If you’re feeling particularly lazy to read the entire post, then this short video is for you. It highlights a few [but not all] points that I have discussed in this post.

In all honestly, none of the pictures or videos do justice to the loveliness of Westport, so I will give it a try using words.

Why I fell in love with Westport, Ireland – 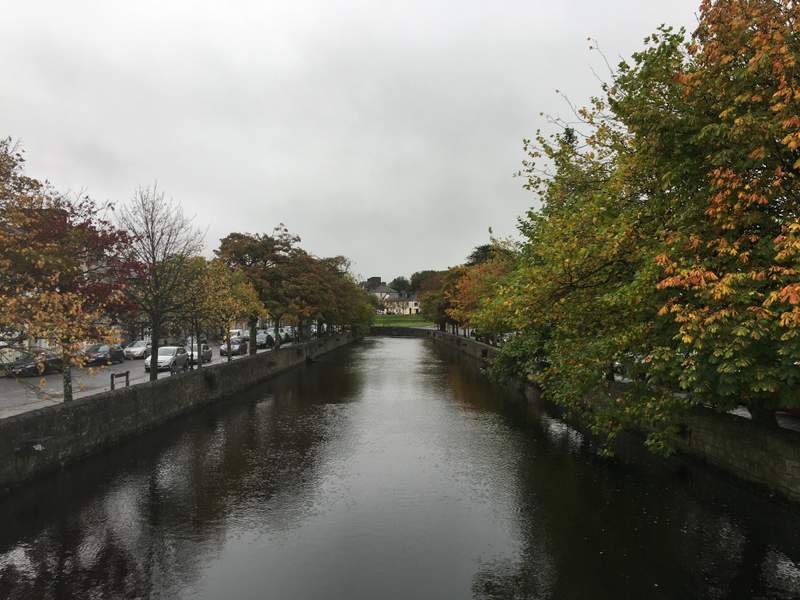 Trees around the Carrowbeg River in Westport, Ireland

Westport has whatever it takes to be an aesthetically pleasing town. The streets are perfectly tree-lined; the main town is colorfully dotted with delightful shops, cafes, and pubs. 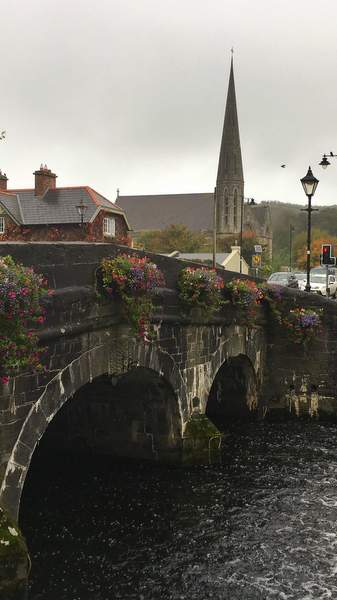 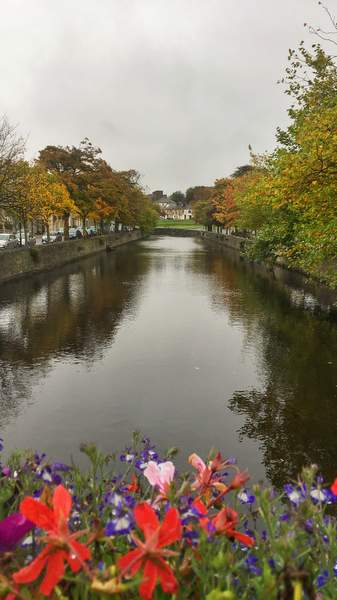 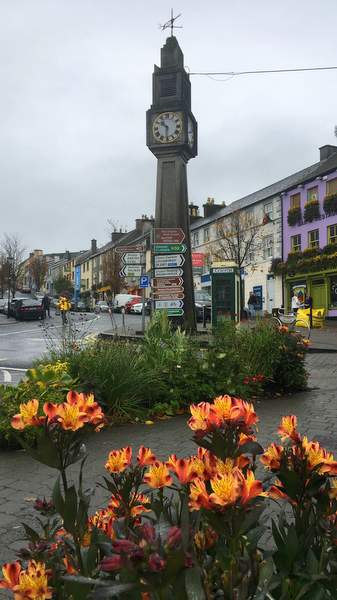 Flowers and Clocktower in the town of Westport, Ireland

To make things even better, there is the gentle Carrowbeg River that cuts through the town and there are old-fashioned bridges on top of this river with flowers everywhere. The banks of this river are called the Mall and there are benches here. From some spots in Westport, you can even see the holy mountain of Ireland – Croagh Patrick. 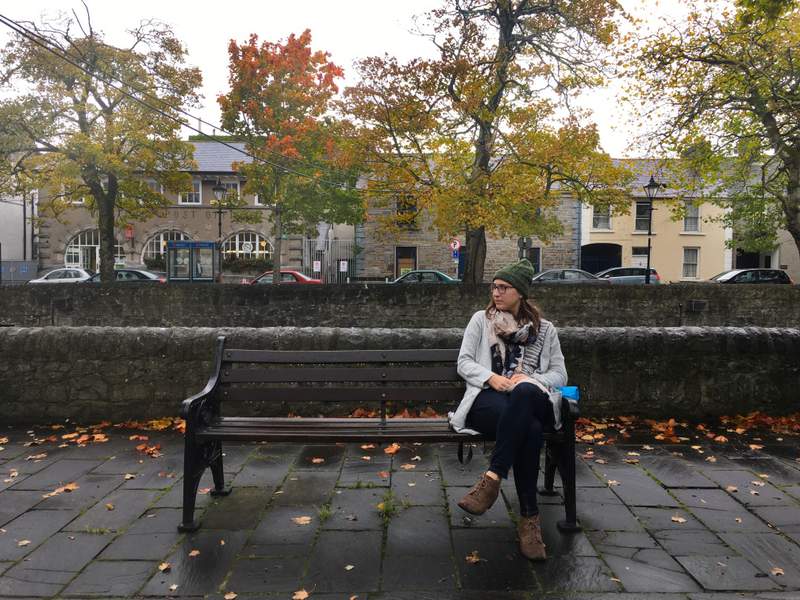 Have I painted an interesting picture?

Well, I was impressed to know that the reason why Westport appears to be near perfect is because there is a strong sense of community amongst the locals to keep the town at it’s best. After all, Westport has also won the contest of “Ireland’s Tidiest Town” three times! (Btw, it is hilariously adorable that Ireland has a contest for the tidiest towns.) 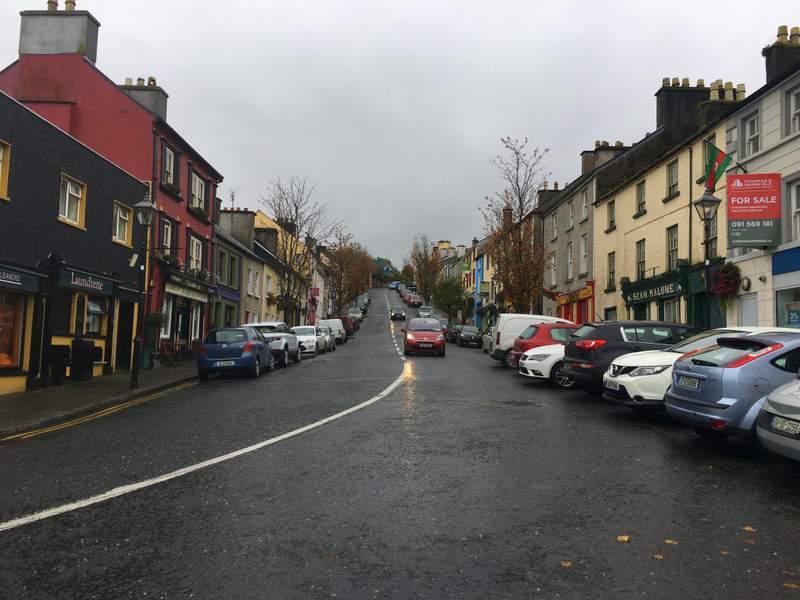 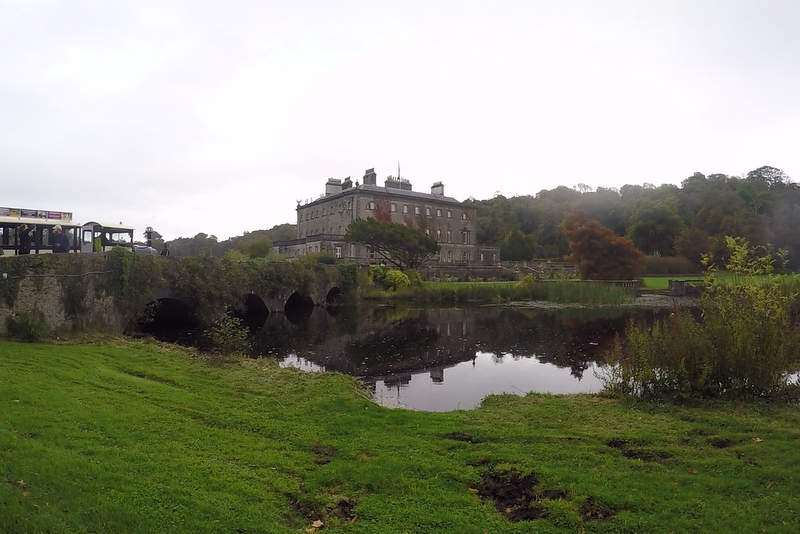 Often called the loveliest historic house in Ireland, Westport House is the city’s biggest tourist attraction. It was the first place that I visited after reaching Westport and spent several hours learning basic archery and watching “Birds of Prey” demonstration.

One of the first things that struck me about Westport House was the beauty in the simplicity of the architecture. There is a lawn that surrounds this Georgian mansion and there’s also a lake on the other side. If you walk along the lake and look back, you will see a full reflection of Westport House in the water. 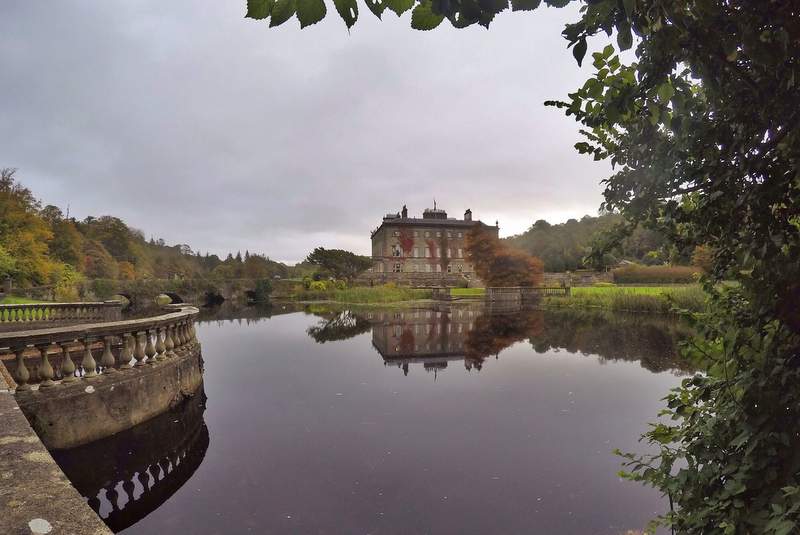 I visited Westport at the beginning of autumn and it was lovely to see a little red creeping in the greenness of this lawn. I also got to explore Westport House from the inside and was informed that there are 30 rooms that are on display here. I did not explore them all but only some due to time limitations.

Westport House was the Browne family’s residence for almost 300 years and is now owned by the Hughes family. The Browne family is the descendant of Grace O’Malley – Ireland’s 16th century Pirate Queen. It was built in a way that the views of the nearby Clew Bay, Achill Island, Clare Island, the Atlantic Ocean and the Croagh Patrick Mountain would reward the residents.

Find manors interesting? You should also check out this self drive itinerary with Ireland’s manors and castles. 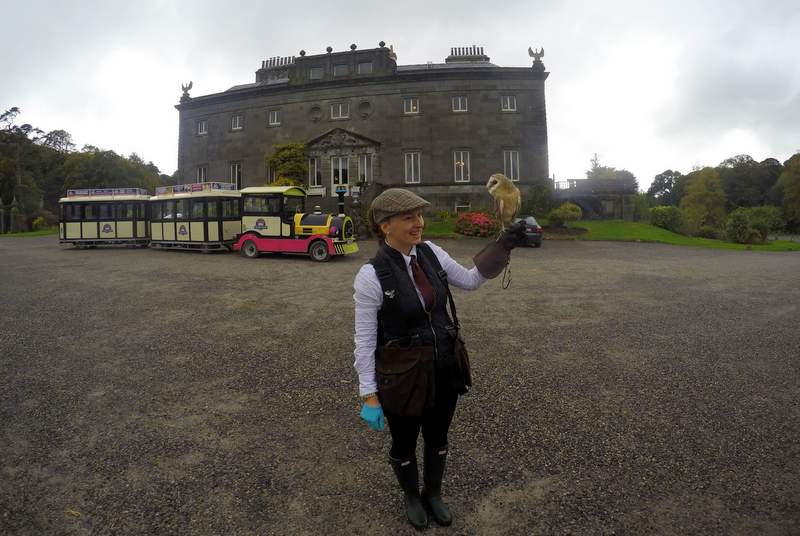 “Birds of Prey” demonstration by Ela and Jason outside Westport House, Ireland

Westport has an Interesting History

In the last section, I mentioned the beauty of Westport House’s garden area. In fact, this garden is where the original Cathair na Mart village existed. The Ó Máille’s controlled the Cathair na Mart castle that was built in the 16th century and the surrounding village. Cathair na Mart village was later moved to its present location by the Browne family and renamed Westport. This town originated as a place for mostly his workers and tenants would live. 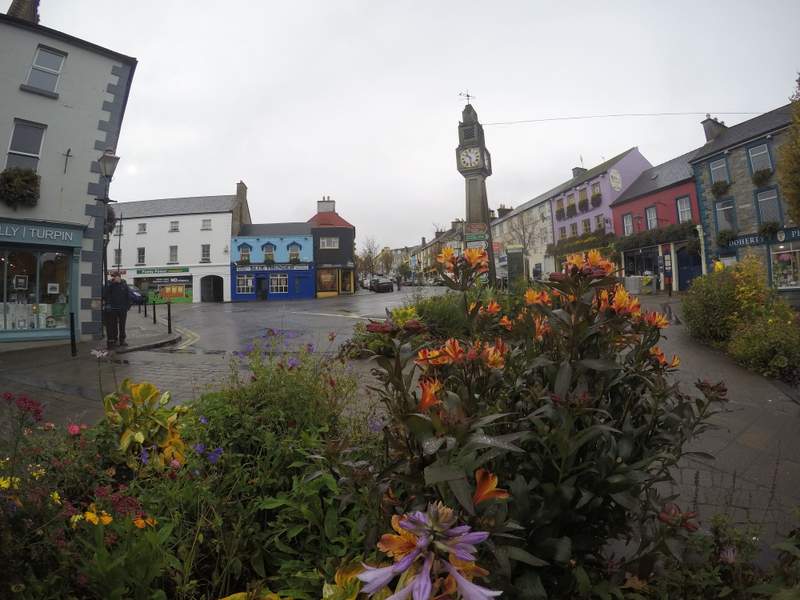 Clock tower in the town of Westport, Ireland – Westport was planed and designed in 1780 by James Wyatt

This town was almost entirely designed and planned in 1780 by an English architect – James Wyatt – who also finished the Westport House. Westport is one of the very few planned towns in Ireland.

Westport is an Amazing Food Destination

One of the things that I love about traveling is experiencing new food that every destination has to offer. I was very excited to visit Westport because it is a thriving food destination. 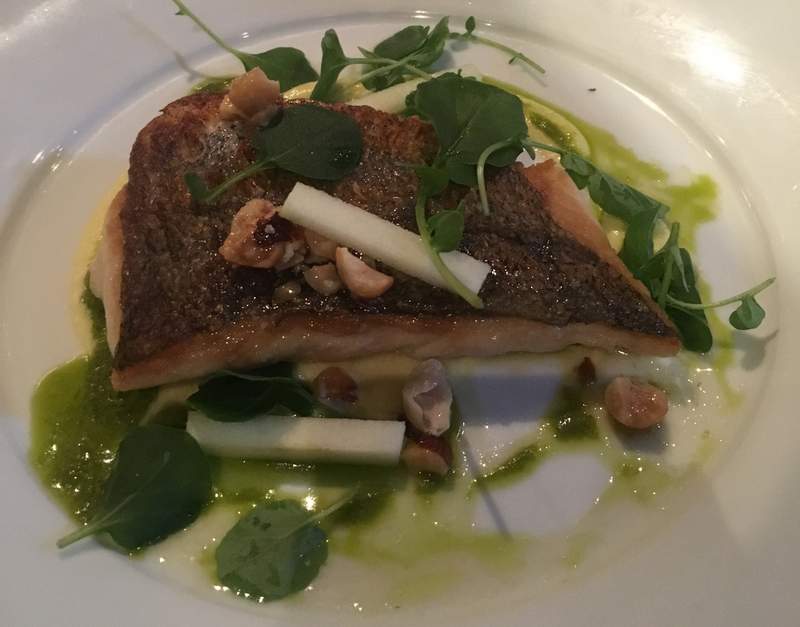 If you enjoy seafood, then you’re going to have a very good time here because Westport is a coastal town. Be sure to try fresh mussels, hake fish, Dexter beef, soda bread and traditional Irish seafood chowder. For something other than traditional food, you will be surprised to know that you can even find good Indian curries here like I did in Hotel Westport. 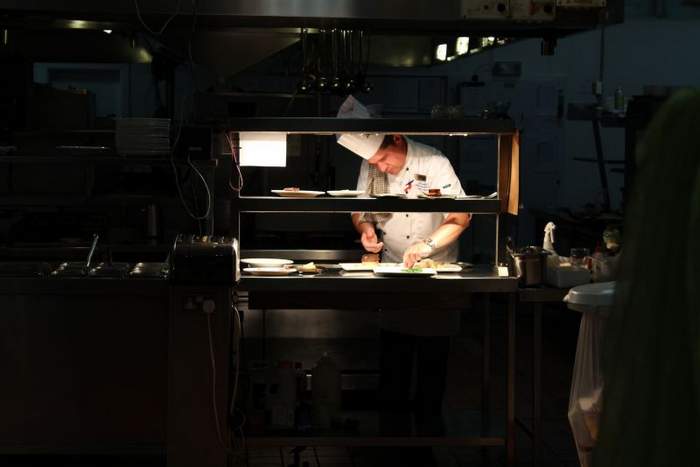 While I was here, I did a food tour where I visited some of the finest restaurants and got to eat some really delicious things. Out of all the places, one restaurant that really stood out was the Idle Wall. I have also written a blog post about this foodie trail in Westport and you can read it here. 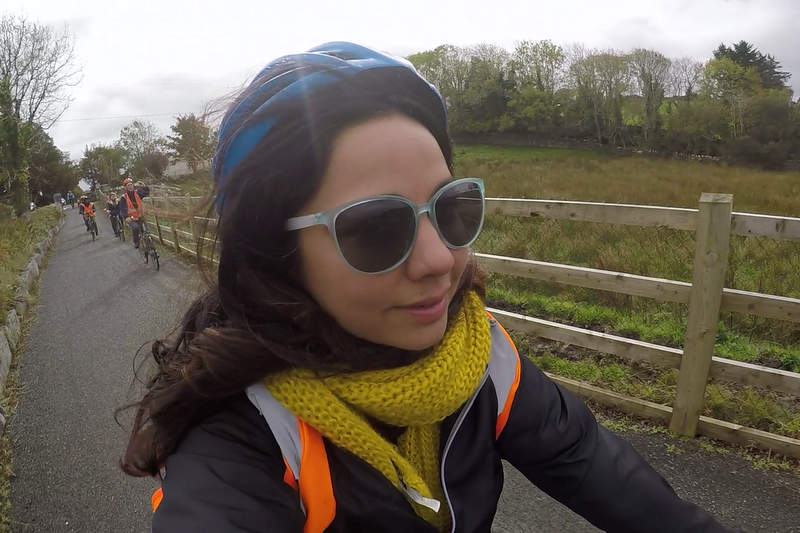 There is something special about exploring a new place on a bicycle. You’re your own master, you can stop anywhere, and you can experience the length and breadth of what the new place has to offer without the protective armor of a car. Also – you don’t have to make an as much physical effort as walking but you get to enjoy literally all its benefits. Besides, it keeps you fit. 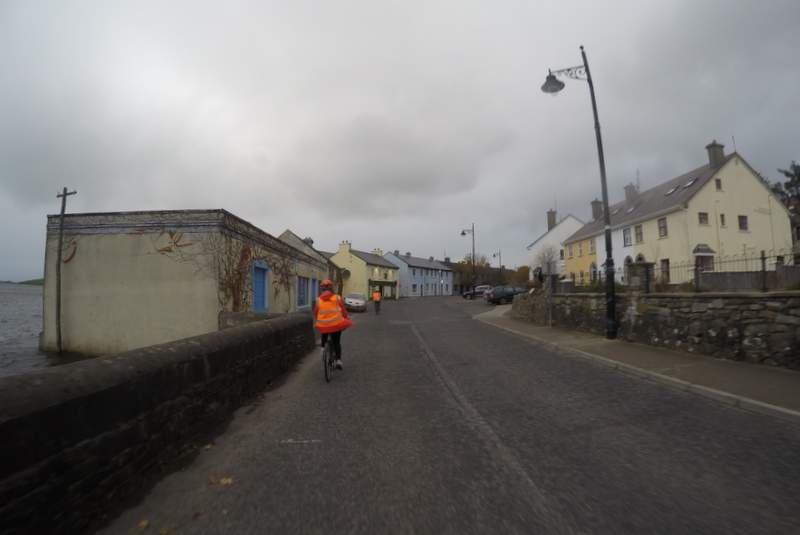 Cycling is an important part of Westport’s culture and is encouraged. The town is small enough so it is very easy to cover it by cycling around. You can rent a bicycle from the Clew Bay Bike Hire, which is in the main town. I highly recommend you cover one [or all] of the cycling trails that Westport has to offer. 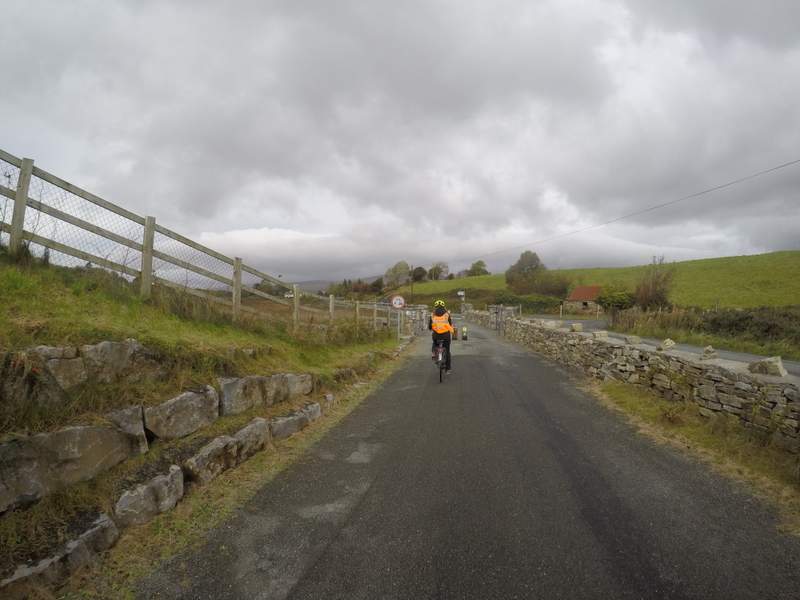 The Great Western Greenway trail also starts in Westport and goes up to Achill Island via Newport and Mulranny. This 42 KM trail is one of the most famous bicycle and hiking trails of the country and is gorgeous. I did around 20KM of this trail and really enjoyed the experience.

If you’re looking for a shorter bicycle trail, then you can check the National Coastal Trail from Westport to Croagh Patrick.

Have you ever explored a small town on a little toy-ish train that you had to yourself? I did for the first time in Westport. 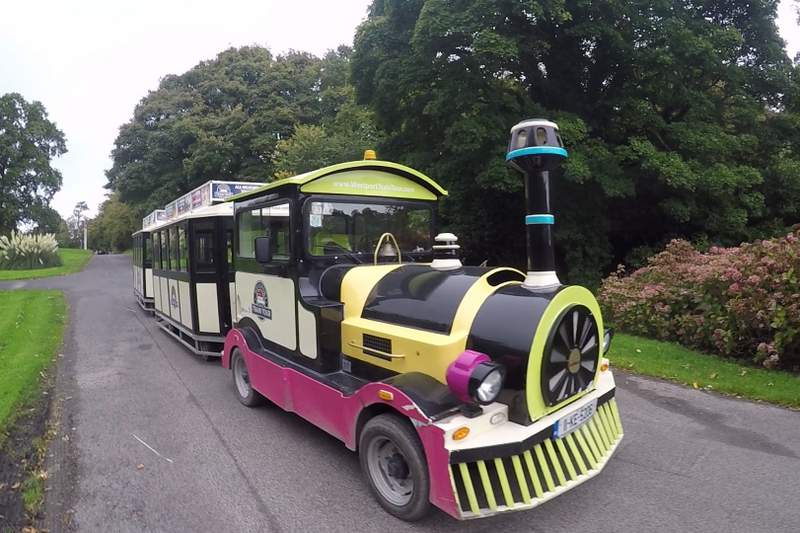 Westport Train – little toy train that you can ride to explore Westport, Ireland

Doesn’t it look lovely? Well, our train had two coaches and we drove around the town and then went to Westport House.

In all fairness – this is a tour that has been specifically designed for travelers. The tour lasts for 45 minutes and shows you the town’s important landmarks and also Westport Quay and eventually goes inside the lawns of Westport House.

Westport Train tour is a fun way to know more about the town. As the train moves, you can hear a recording of Westport’s history, interesting facts and more. It is one of the things that you can enjoy when it’s raining in Westport.

If you’re heading to Ireland, then be sure to include a small town in your itinerary and let Westport in Mayo county be that town. While there, experience the local Irish pub culture along with a glass of Guinness and traditional Irish music in Cobbler’s Bar. 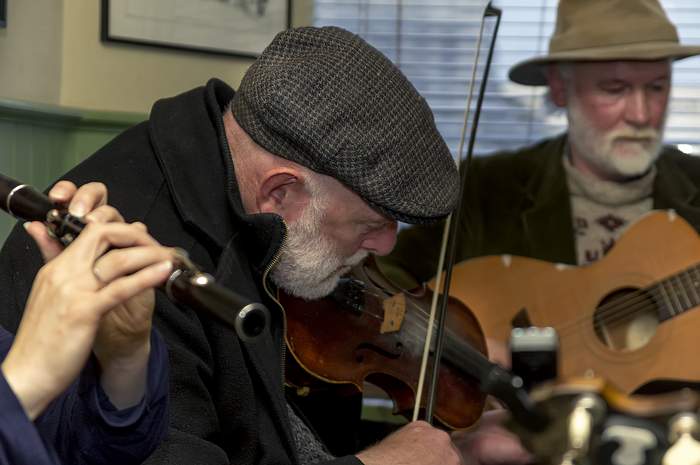 Have I convinced you to visit Westport? Leave a comment and let me know what you think. If you enjoyed this post, be sure to share it with your friends or family members who’re heading to Europe.

Flowers on the bridge in Westport, Ireland – County Mayo

You may also enjoy:

What to wear in Ireland

Disclosure: I explored Westport with Fáilte Ireland and Tourism Ireland on a press trip but all opinions in this article are mine.