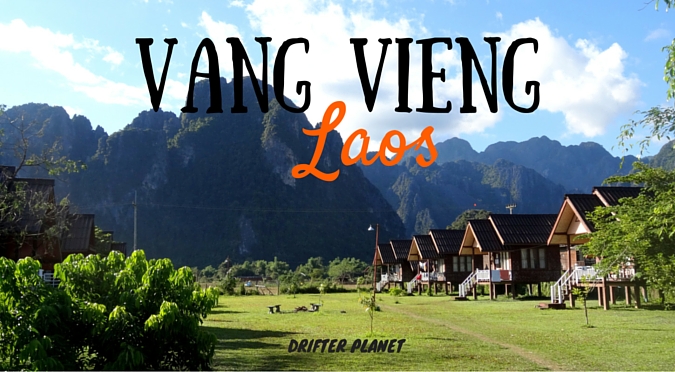 Vang Vieng is a small town in Laos along the Nam Song River.

How to Reach Vang Vieng, Laos

The usual way of reaching Laos or Lao is by road. You can take a bus from Bangkok over the friendship bridge boarder to Vientiane, which is the capital of Laos. 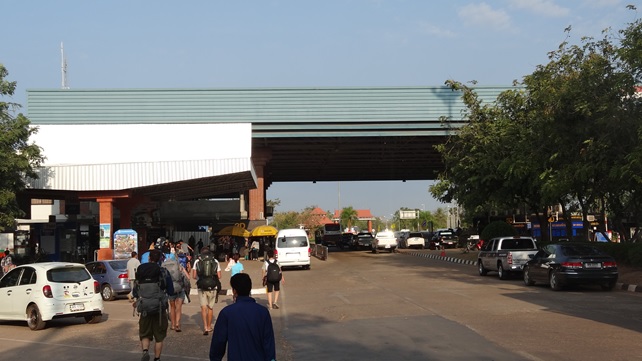 I was a in a bit of rush so decided to make my way directly to Vang Vieng. Moreover, I had a few friends waiting for me so I decided to skip the capital altogether. Anyway, I have an aversion to capitals, maybe because they are usually too packed for my liking.

From Vientiane onwards I decided to catch a local bus, which turned out to be an amazing experience for me, even though it was moving at a snail’s pace. I was the only foreigner sitting in a bus full of locals without an AC – it was fucking hot inside!

This experience was completely new and unexpected because this bus did not just have people inside. The people carried all kind of animals inside the bus which were most likely going to end up as a meal later. One guy had a beautiful little bird in a cage and another one carried two chickens in a plastic bag that were still alive (of course). This was a whole new thing for me because back home in Germany nothing like this would ever happen. Speaking of Germany, during the bus ride I thought of my home town. I also remembered a few things that some people had told me – stuff like it’s not safe to go abroad because there are bomb threats in many parts of Asia. Some even said ridiculous things such as – if I go towards the wrong direction I may end up in an opium field! At this moment, I felt I was truly lucky to experience something as simple and yet unique as this bus ride.

The bus-ride from Vientiane to Vang Vieng took around 6-8 hours I got to see the beautiful and hilly landscape of Laos.

After reaching Vang Vieng the bus stopped at a place which was completely empty and looked a bit like an Airport for small airplanes. I still don’t know if it was just a huge street or actually an airport. This place had an awesome view with hills all around. 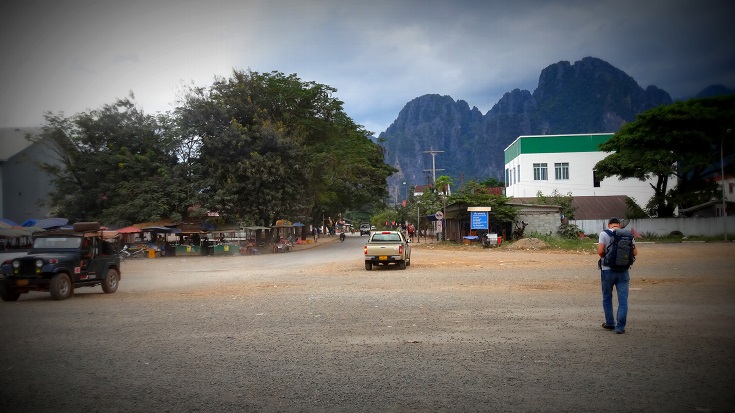 From there on I had no idea where to go but it didn’t take long to find another lost traveller and we went together to the main town of Vang Vieng by foot. On my way to main town, I was totally in love already with this place already. Arriving to this scarcely populated area from the overcrowded and tourist filled Thailand, it was a delight.

Don’t get me wrong, there were a few tourists here but it was quiet and stress free because it lacked people who wanted to sell you useless things or ping pong shows. The locals are relaxed – a feeling that is contagious and hits you when you get here. There were just a few shops that sold the typical touristy stuff such as beer tank tops, jackets, and so on. I spotted a few scooter rental shops too. There were many shops that were selling delicious street-food which is the only thing that reminded me of Thailand. Overall – a beautiful small town with lovely locals. 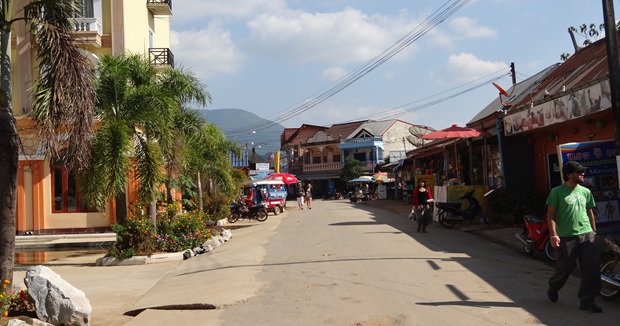 Where to Stay in Vang Vieng

I decided to stay in a place which was called Banana Bungalows. I had to cross a small bamboo bridge over the river to reach it. 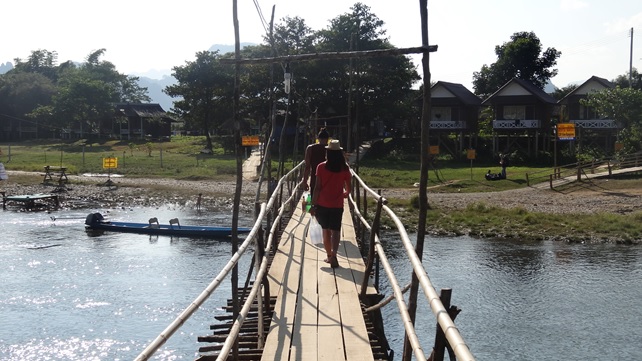 The small bridge to Banana Bunglows in Vang Vieng, Laos

The view from this bridge was spectacular. Here’s a picture for you: 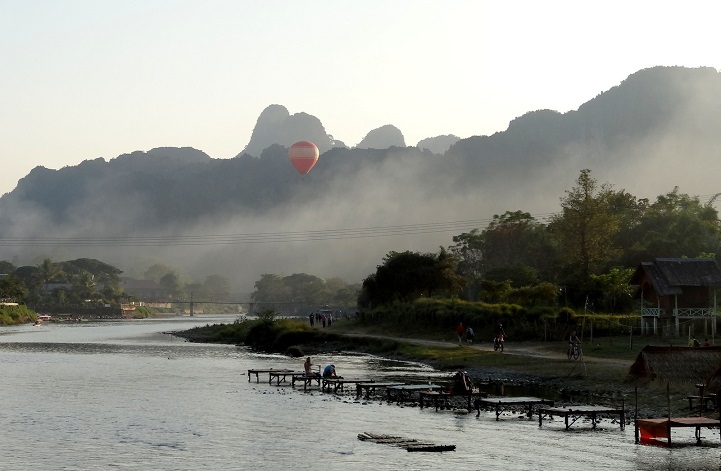 The small bridge to Banana Bunglows in Vang Vieng, Laos

This place was recommended to me by my friends that were waiting for me there – it was really awesome. The view all around was mind blowing.  The hills which I saw before from far were now in walking distance from the place where I stayed. I could only say two words when I reached here – “fucking amazing”. 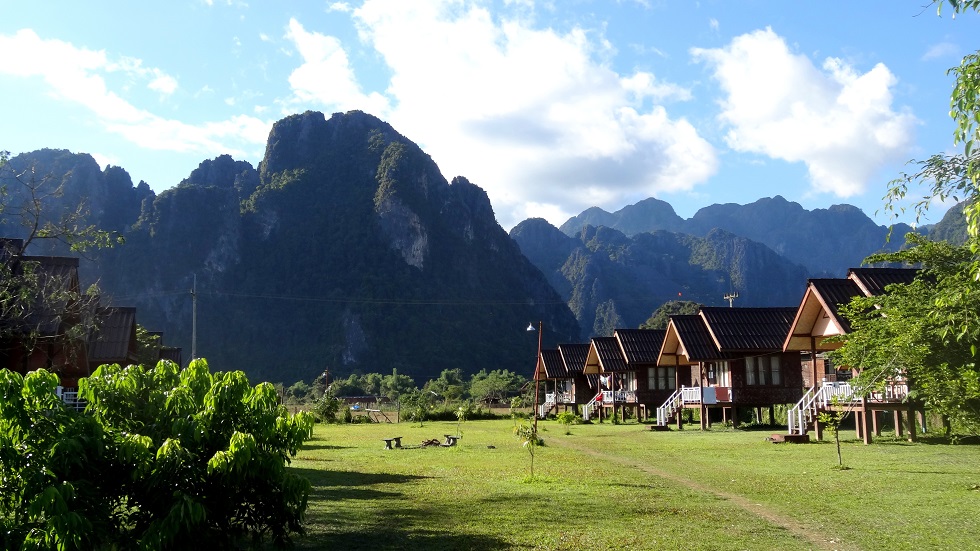 There was a massive garden around our huts that had a net where we could play Thai football, Badminton or Volleyball. There’s not much to do at this area – maybe play a few games or have a nice BBQ. However, there are a lot of activities that one can do outside – hiking, rock-climbing, tubing, balloon rides, caves or just cycling around in the beautiful landscape. There’s a famous blue lagoon which is not far away from this place which sadly I did not end up visiting.

Right behind the bungalows and just a 15 min walk away was a little cliff which one can climb for a fee of 10000 Kip which is equal to 1 euro. As per me, it was worth every penny. 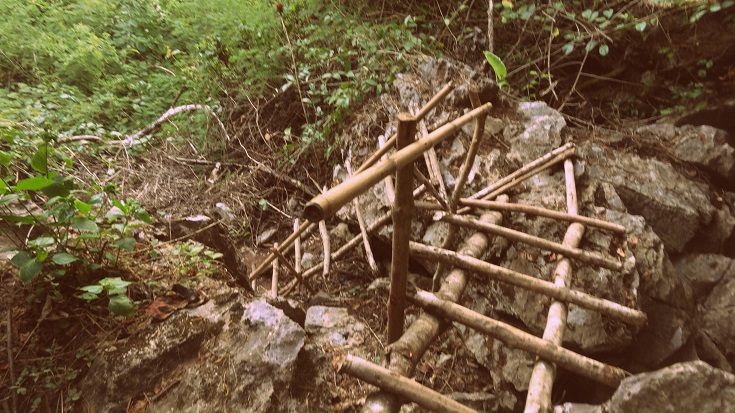 Its beginner friendly climb that’s easy to handle. There were little things such as ropes and ladders all over so it was not a big challenge to climb to the top. 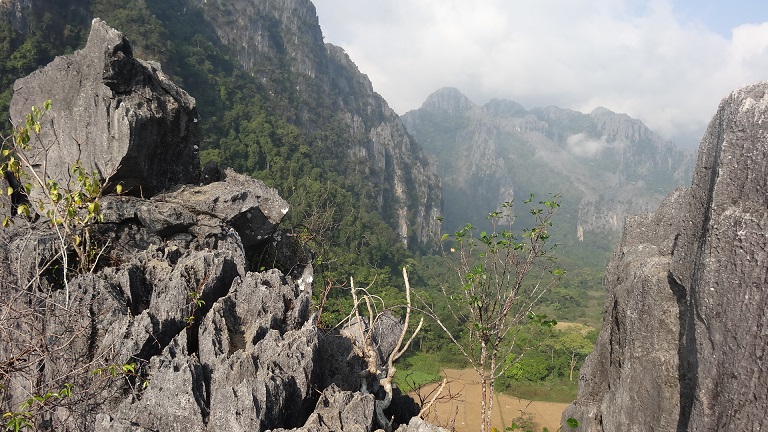 It was definitely an adventure! Upon reaching the top, it took me a while to completely savor an amazing view all over Vang Vieng with the bigger mountains in the back. It was a nice feeling to just sit there for a while and enjoy life at its best. 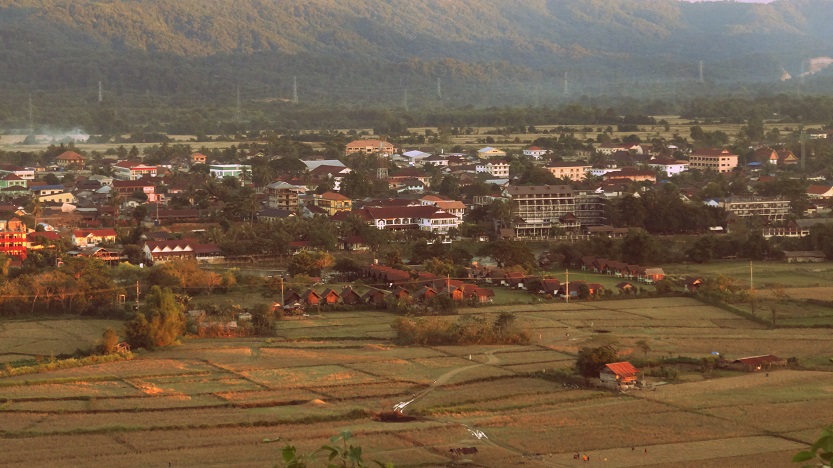 The little town below – Vaang Vieng 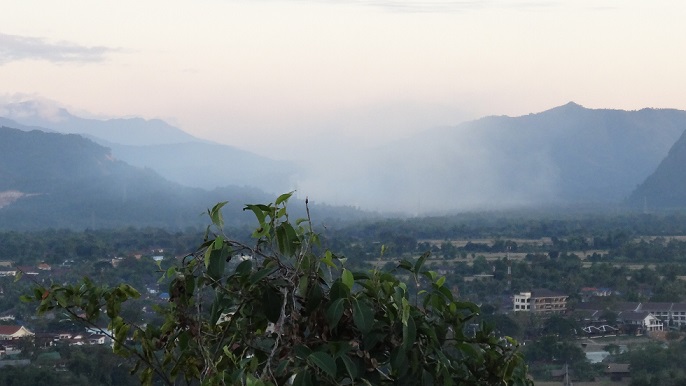 Vang Vieng View from the top

Up here, I met some German guys on magic mushrooms that did this barefoot (hehe), but I would not recommend doing that because there are some tricky steps to this climb. If you go there, I recommend you should start your way back before its gets dark.

Tubing in Vang Vieng is famous all over Asia so obviously I decided to do that too (Why Not?). There are several places where you can rent the tubes from and they take you to the starting point on a jeep. 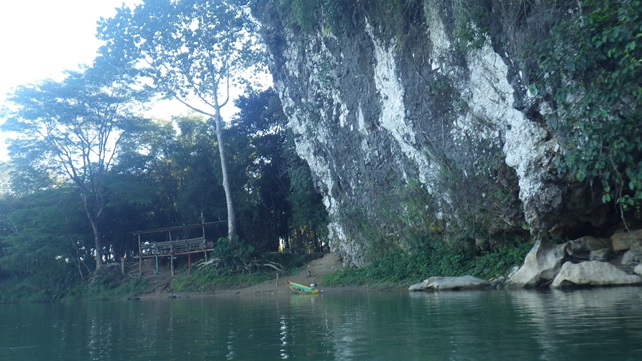 I don’t remember exactly how much it costed but it was not expensive. A waterproof camera is necessary if you are interested in taking tubing pictures, but nowadays every hipster owns a GoPro. After a drive that lasted 10-15 minutes, I reached the boarding point for all the tubers. The water was shallow here. Even the stream was not that strong but that depends on the season when u go. I heard about many incidents with people who lost their lives here. 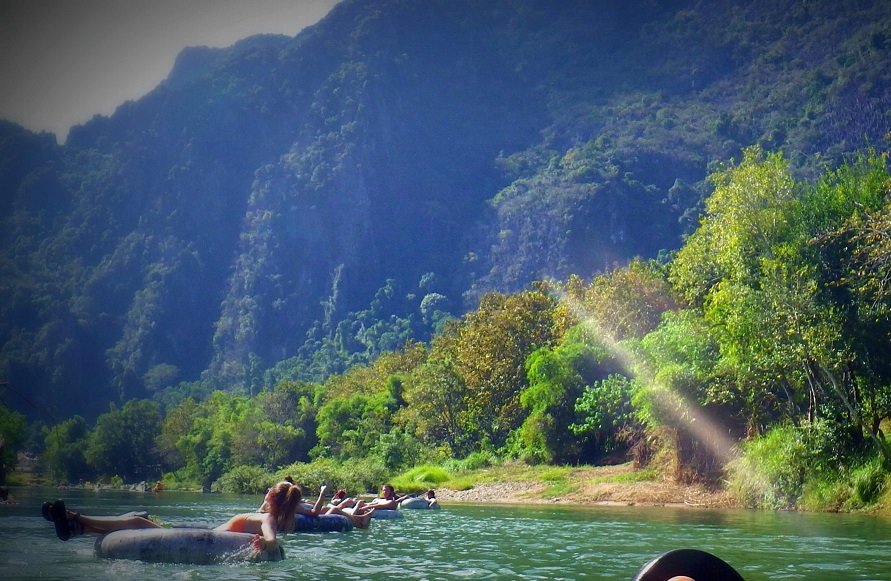 While tubing on the river, usually people make a human chain and pass around beer and other stuff. We did that too while getting a little drunk, enjoying the clean river water and the sunshine. 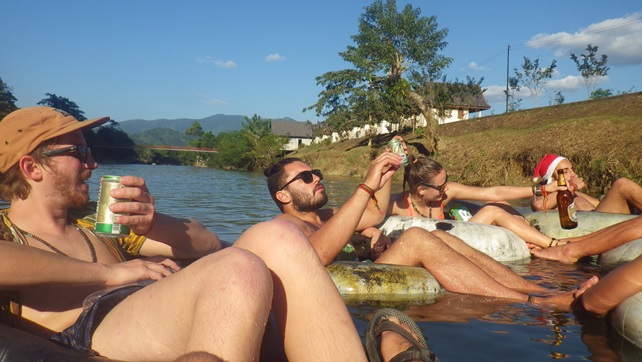 Just when the ride started to become a lot of fun, we spotted the first bar along the river. It was just a few meters away from the starting point. In total, there were three of them. There are some bar owners that throw ropes on the tubers so that they can land near the bar. 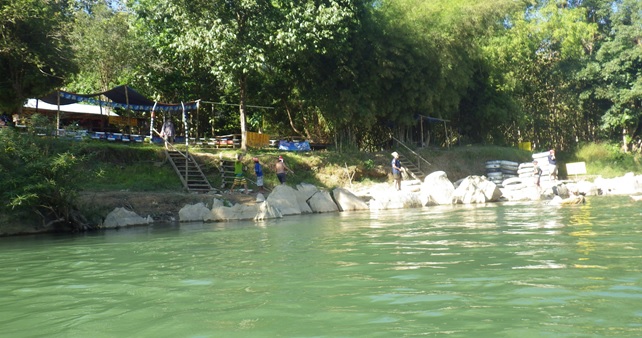 Bar along the river while tubing in Vang Vieng, Laos

The bar was playing music which we heard already from far away. All of us were in the mood to drink some more and enjoy ourselves. 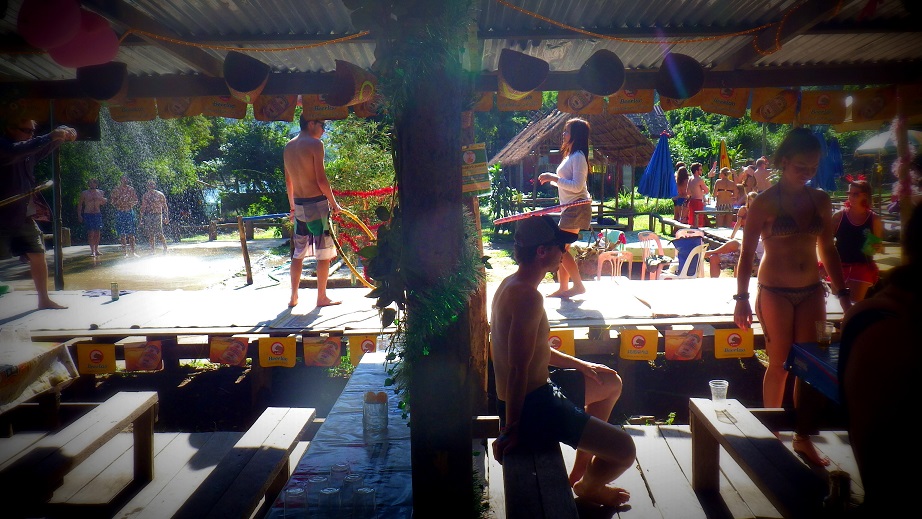 Activities inside the bar in Vang Vieng

The bars had an outdoor area with activities like beer pong, soccer, basketball, dancing, volleyball, and many more things to keep the people busy. 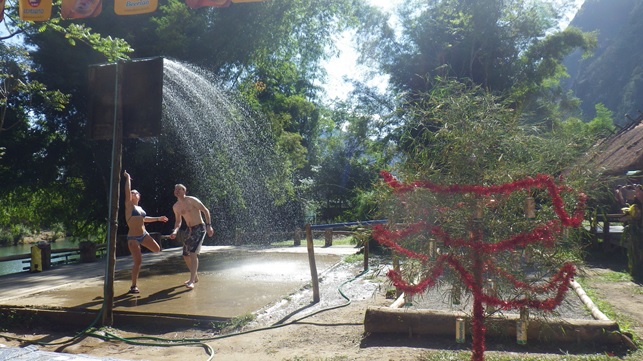 I got a wristband when I bought a drink here which I carried back as a souvenir. After a while, we made our way back to the river and decided to check out the next few bars. 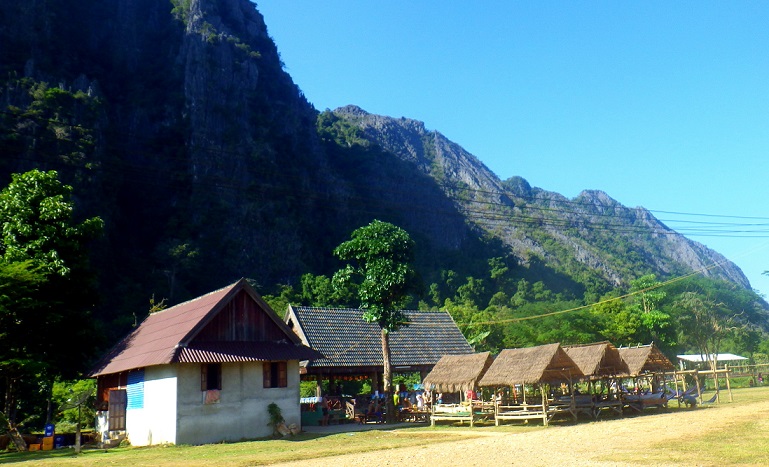 One of the bars while tubing in Vang Vieng

This is all there is to tubing – you rent a tube and flow to the bars along the river. It’s a fun way to party but be careful because drinking and swimming is not a good combination. We heard that there were 13 bars in total a few years back which apparently shut down because quite a lot of travelers got into accidents on the river after getting drunk. In 2011, 22 tourists have reportedly died by drowning in the river. Overall, tubing was fun, but not as much as I expected it would be. Try to be back before the sunset otherwise you may face a few problems to find the place where u rented everything from (Oh, and don’t forget you will be drunk).

Going out in the evening turned out to be a lot of fun in Vang Vieng because we discovered that there are LOTS of bars where you can drinks and enjoy things like fire-shows and activities such as pool or ping pong. Another nice thing is that every bar provides a special ‘Happy Menu’ for Happy times 😉 go and find out for yourself. Don’t miss to drink the Local rum called Lao-Lao.

For me the best thing in Vang Vieng was cycling around and getting lost in the flat lands between the rice fields. I saw many local children running around and playing – I wanted to join them. 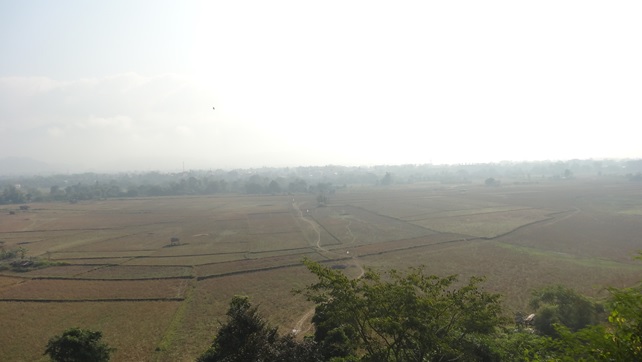 A few relaxed days here and it was time to move on to the south. The next was 4000 islands – Don Det at the huge Mekong River. Overall, Vang Vieng turned out to be a place for parties but in its own nice and relaxed way. I regret not visiting the blue lagoon and the cave, but it was not the last time Laos for me 🙂

Pin to save for later 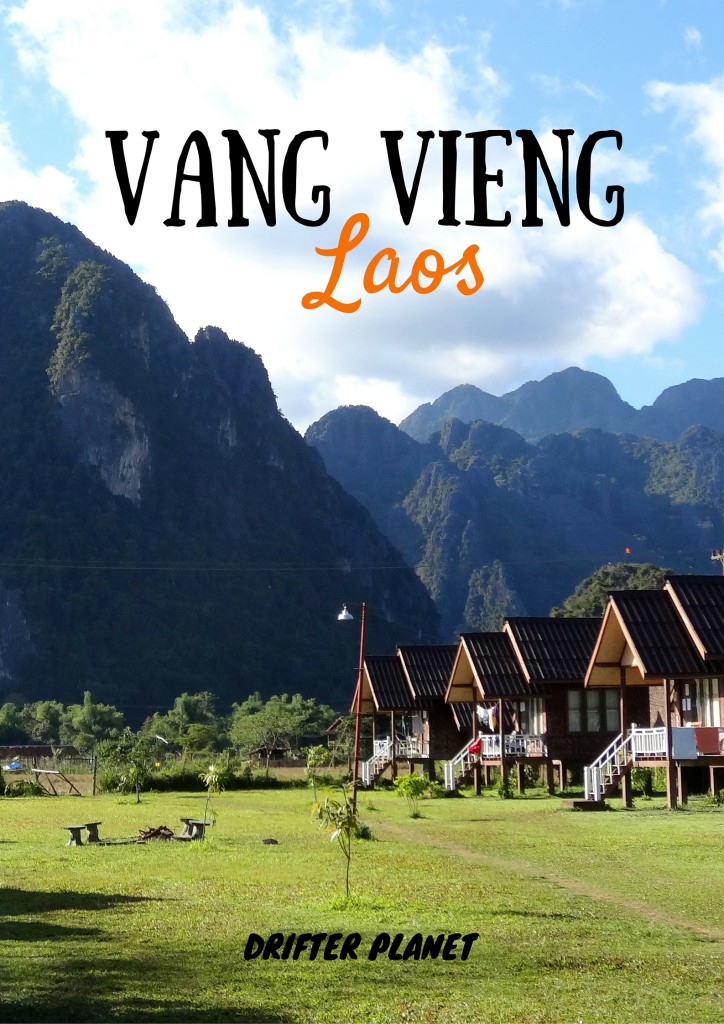