20 Quotes about Amsterdam [that You’d Want to Steal] 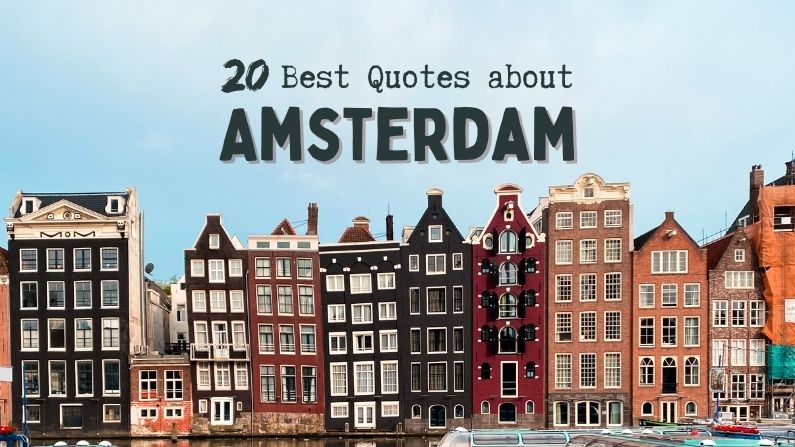 Have I told you already how much I love Amsterdam?

Amsterdam was the highlight of my first-ever trip to Europe in 2014. I moved to Europe in 2017 and I make it a point to visit this cute city every single year (even if it is just for a weekend).

If you search on the internet, you will find 100s of quotes about Amsterdam. Whoa!

But who has the time to read close to 2000-4000 words if one’s just looking for just short, punchy, and witty travel-related Amsterdam Instagram captions? 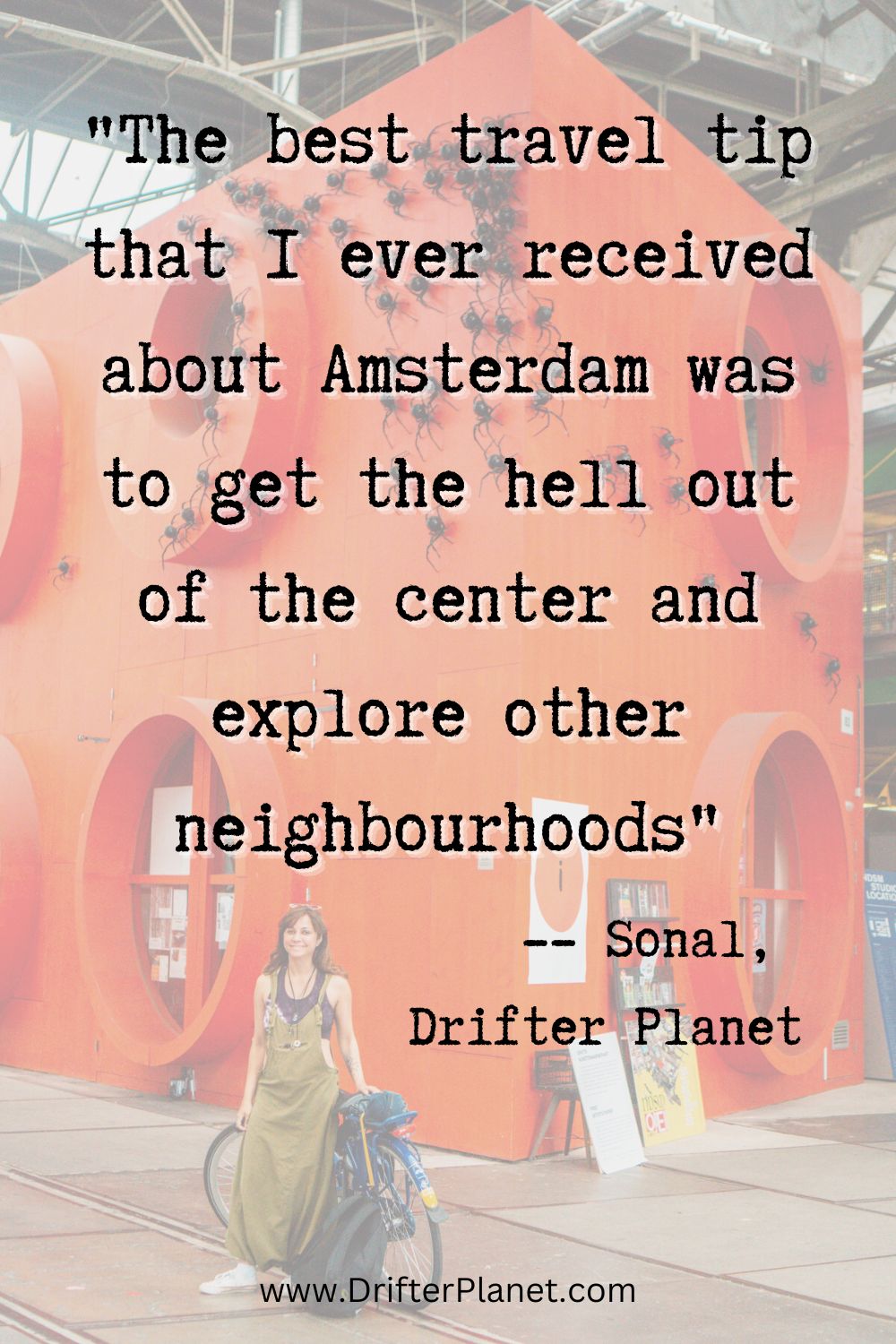 A few days back I was looking for a super cute and quick Instagram caption for Amsterdam but I was overwhelmed by the search results.

Not just Instagram, but what if you’re writing something about Amsterdam and you want to start your post with a famous quote about Amsterdam? I don’t know about you but I definitely don’t have the patience to go through 100s of quotes.

So, if you’re in a hurry, I have shortlisted the best Amsterdam quotes for Instagram that you’d want to steal.

“Some tourists think Amsterdam is a city of sin, but in truth, it is a city of freedom. And in freedom, most people find sin.”

― John Green, Author of The Fault in Our Stars.

Yes, I started with the most famous quote about Amsterdam that’s mentioned everywhere, but I think this quote perfectly captures the essence of Amsterdam.

I have used it on my first ever blog post about Amsterdam in the opening line too because it fits the city perfectly.

“When you mention you’ll be making a stopover in Amsterdam, you get a reaction I can only describe as semi-collegiate. A knowing look … as if there can really only be 2 reasons you’d go to this lovely little city of canals.”

Having visited both Bangkok and Amsterdam multiple times, I agree with this quote one hundred percent.

“Last time I was here I slept in a park because I spent all my money of hash and hookers.”

“Amsterdam has more than 150 canals and 1,250 bridges, but it never seems crowded, nor bent and bitter from fleecing the tourist.”

I love this quote about Amsterdam because I think Julie Burchill must have been in Jordaan for an experience like this. I personally think Jordaan is the most romantic place in Amsterdam for couples.

“Stand outside De Eland, on the Berenstraat Bridge over the Prinsengracht, and you see what real Amsterdam life is like.”

“Amsterdam was a great surprise to me. I had always thought of Venice as the city of canals; it had never entered my mind that I should find similar conditions in a Dutch town.”

“In Europe, I always have fun bike riding in Amsterdam.”

Btw, if you like riding bicycles and would like to explore Amsterdam this way, here’s my tried and tested itinerary for spending 2 days in Amsterdam with cycling map for each day.

“In Amsterdam, the river and canals have been central to city life for the last four centuries.”

“I think Amsterdam is to Holland what New York is to America in a sense. It’s a metropolis, so it’s representative of Holland, but only a part of it – you know, it’s more extreme, there’s more happening, it’s more liberal and more daring than the countryside in Holland is.”

“Most visitors to Amsterdam will wander into the red-light district out of sheer curiosity. The narrow streets are mostly safe day and night – just don’t try to take pictures of the women working in the windows.”

“I don’t have a problem with saying, ‘I love you.’ I probably said it to the whole of the red-light district in Amsterdam when I was about 21. “

“Amsterdam lives and breathes creativity. One moment you walk into a building from the 17th century, and the next you find yourself in a hub of creative start-up companies.”

“Amsterdam is a breeding ground for new creative pursuits in many areas fueled by a tolerance and openness to ideas unlike any world city I’ve been to. There is something for everyone here, especially when you dare to go off the beaten path.”

“What’s special about Amsterdam is that the city is able to connect worlds that are not otherwise connected.”

“You could spend your time with your nose buried in a guidebook, but Amsterdam really is best explored on foot, so you can stumble upon the city’s hidden gems. The architecture and the beauty of some of the buildings is also wonderful.”

“Amsterdam is such a fun, cool place, and it’s very Instagrammable with the canals and the boats and the flowers and the architecture. It’s amazing for outfit of the day shots.”

(Yes, I say this too all the time that Amsterdam is very Instagrammable. I also published my post about Amsterdam’s top Instagram spots which you will want to bookmark for your next visit.

“Amsterdam. It is so cute and quaint. I rode bicycles around the city and through the tiny little streets, rented a paddleboat and had a picnic lunch on the canals.”

“And in Amsterdam, you learn that a night out dancing is good for the soul.”

I agree, Amsterdam’s nightlife is one of a kind. If you are already in Amsterdam or are heading there, then you should know that I have a post about Amsterdam’s party scene on my website. Just wanted to let you know, just in case you’re interested in that kind of a thing.

Yep, that last quote is from me and I say it to every single first time Amsterdam visitor. I also mention it on some of my blog posts.

I was actually stuck to the centre the first time I visited but never again after that and I saw a very different and better side of Amsterdam, and it became my favorite city break.

The worst place to hang out in Amsterdam is the main centre, the Dam square and around. Ideally you would want to get a quick look here and then move on to areas like Jordaan, Noord,

Instagram or not, I genuinely enjoy a quick look at what people have said about some famous historical destinations.

I remember when I visited New York City, I wanted to rub it on my friend’s faces but didn’t want to look like a show off at the same time, so I found a quote about the city and posted it on my Facebook Wall. (haha)

So, the next time you’re visiting Amsterdam and you want to discreetly brag about it, hope you find your perfect quote on Amsterdam on my website and post it on social media. If you do, tag me @DrifterPlanet and I’d love to share your post on my Instagram story.