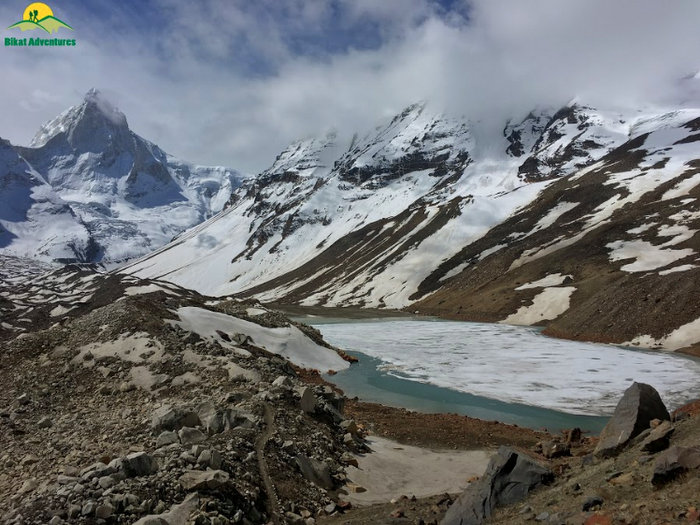 Imagine a glassy bluish green lake that’s surrounded by the Himalayas with literally no soul in the sight – this is Kedartal Lake.

Kedartal, is a combination of two words – Kedar and Taal where Kedar refers to Lord Shiva and Taal refers to lake. So the name Kedartal literally means Shiva’s Lake. Yes, this glacier lake is often called that.

Kedartal Lake is in the Himalayas in the Uttrakhand state of India, more specifically the Garhwal region.

The only way of seeing the Kedartal Lake is by trekking from one of the nearby villages. You can do this trek from Gangotri, a place that you can reach by taking a bus or a train from Delhi and then further taking a taxi or another local bus.

Situated at an altitude of 4,750 meters above the sea level, Kedartal trek is not easy and requires proper acclimatization. If you’re planning to trek to Kedartal then this post will give you all the information that you need before you leave.

Once you’re there, you can expect to see the majestic Himalayan Mountains, altitudes exceeding 15,000 ft. and a shimmering emerald glacial lake. Standing at the lake, you see high peaks guarding it all around. Many do not know of Kedartal Lake, so this trek   yields you what may crave – solitude to bond with yourself.

The 7-day Kedartal trek in the state of Uttarakhand is a moderately difficult one. Physically fit, high on stamina, and experienced trekkers capable of independently negotiating the terrain can undertake it. Sharp inclines, scree, boulders, the altitude of over 15,000 ft., and covering all this within 5 days without much break can test you well. So, you need to be ready for long distances and challenging terrains each day.

May-Mid June and September-October are the best months to go for this trek. Much of the snow is away during this time. For the remaining months, the weather can get extremely cold.

Set up a base in Gagotri and Acclimatize 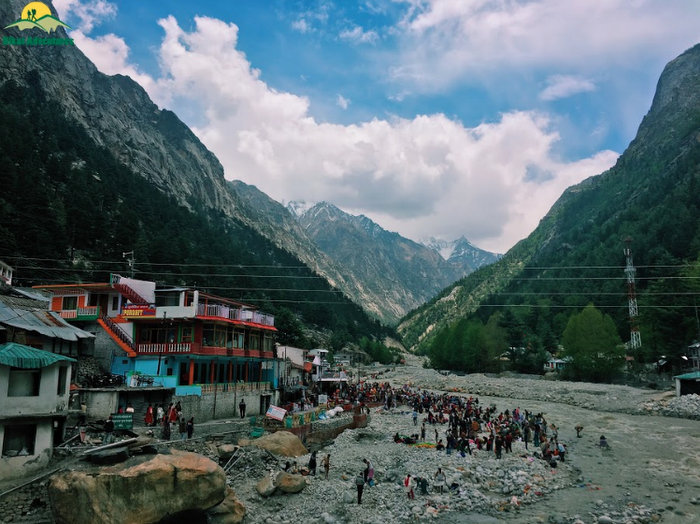 You acclimatize for a day before the trek starts from the Hindu pilgrimage town called Gangotri (9,576 ft.) along the banks of the raging River Bhagirathi. To reach Gangotri, you first need to reach Rishikesh by train and then take a bus or a taxi from there. A taxi from Rishikesh to Gangotri won’t be cheap because the distance is approximately 250 KMs. It can cost you anything from INR 3000 to INR 4000.

Gangotri owes its name from the origination point of River Ganga it houses. It is a pilgrim destination and you can see temples, ascetics, caves, local markets, pine forests, sumptuous food, evening ‘aarti’ of the River. Gangotri offers this and so much more.

We highly recommend you spend another day in Gangotri. This way you can go for a small acclimatization walk locally. Rest and get a good night’s sleep so that you can start your trek early morning next day.

Trek to Bhoj Kharak and Camp there overnight 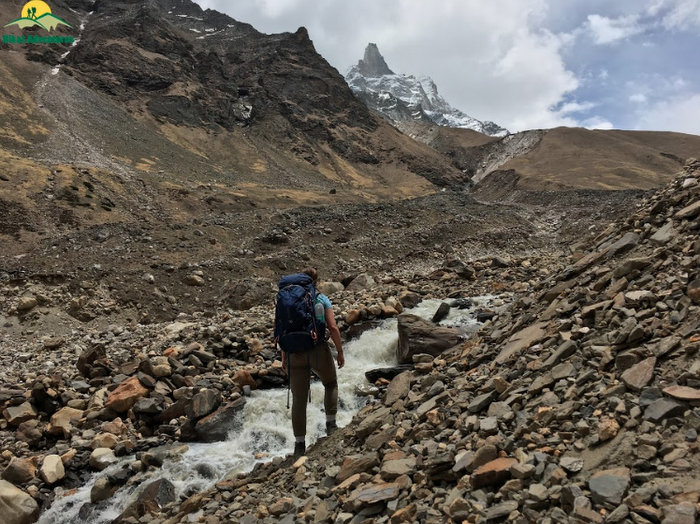 Kedar Ganga River on the way to Kedartal Lake Trek

On the third day, you technically start your trek. Kedar Ganga River will give you company on this green hilly terrain. Pine forests at lower altitude are replaced by short ridges of Birch trees as you go up. You might just happen to see the humble Blue sheep or ‘Bharal’ at any of the green patches through the stretch. You cross a 60 degree inclined boulder to reach your first campsite Bhoj Kharak (12,893 ft.). 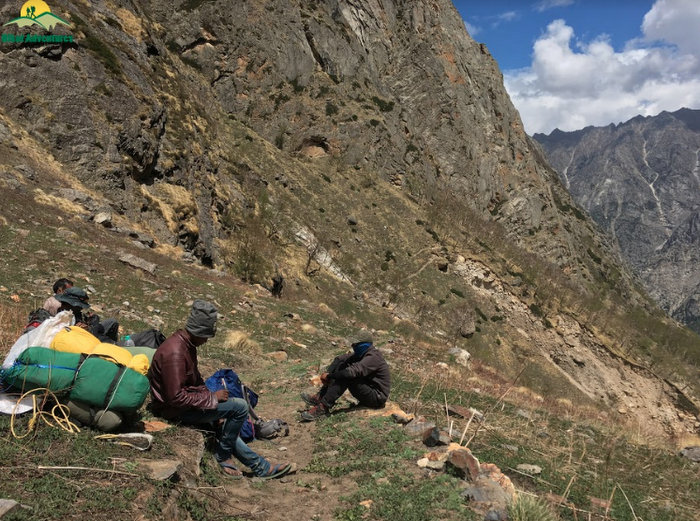 Bhoj Kharak on the way to Kedartal Trek

The Birch tree clusters mark Bhoj Kharak with purple rhododendrons adding subtle shades to the surrounding. It’s a small settlement with terrace farms and huts. You fix your camp right amidst one of these farms. The biggest attraction is the long distance view of the snow-white Thalay Sagar peak. You will see it closer at Kedartal on the fifth day. 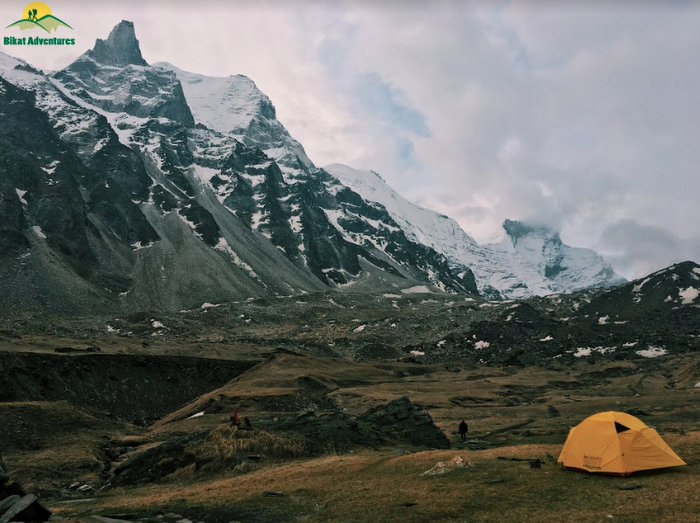 Kedar Kharak Campsite on the way to Kedartal Lake

Target reaching Kedar Kharak (14,468 ft.) on the fourth day for your next camp. After some ascent you reach a 100m patch of landslide. You have to make steps to cross this steep undefined slant. This is one of the highlights of the day! 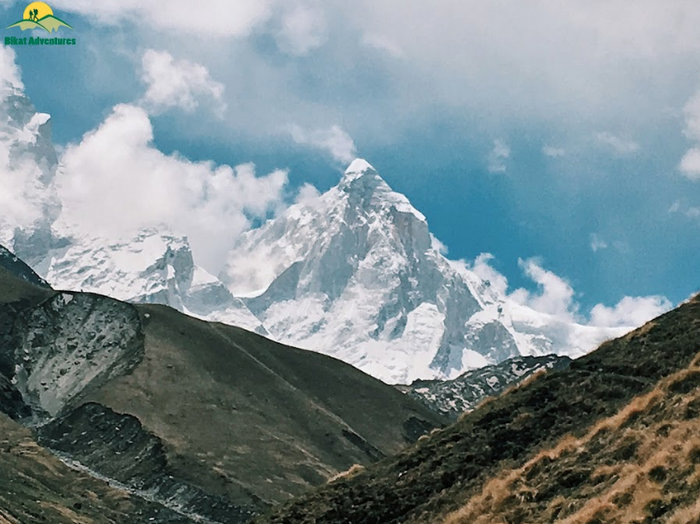 Much of your journey is back to scree terrain until suddenly you see a while towering and magnificent Mt. Bhrigupanth (22,218 ft.) in front. Get down to the gushing Kedar Ganga riverbed, which you cross partially to reach the campsite ground, which thankfully is grassland. Watch the spectacular Mt. Bhrigupanth (22,218 ft.), Mt. Thalay Sagar (22,651 ft.), and Mt. Jogin 3 (20,120 ft.) in front.

Head to Kedartal and Camp Next to the Lake 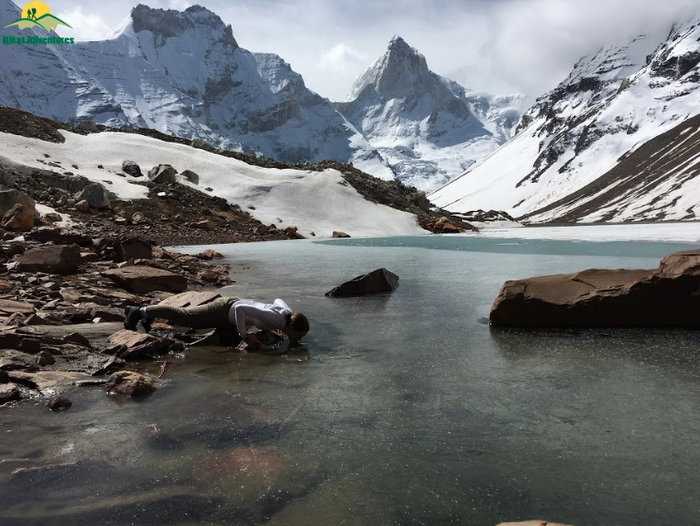 Kedartaal Lake surrounded by the Himalayas

On the fifth day you head for the biggest highlight of the trek, Kedartal (15,748 ft.). Cross 3 ridges, which are barren and laden with boulders, scree, and dust just before the lake. Also known as Shiva’s Lake, the beautiful ‘Tal’ sits calmly in its precious solitude.

Watch the snow clad peaks change color as the sun rises. Their reflection in the water leaves you brimming with pride and excitement. Here you see another highlight of the day, the Kedar Glacier to your left, which is the source of the theme river of the trek Kedar Ganga. You may camp at the banks of the lake or can descend back to Kedar Kharak for another night there.

Hike Back to Gangotri

The last day of this trek will be a very long one as you lose height of Kedar Kharak for Gangotri. But hey, by this time you will most likely be feeling very happy with yourself for being lucky enough to see the Kedartal Lake. It is a sight not many get to witness!