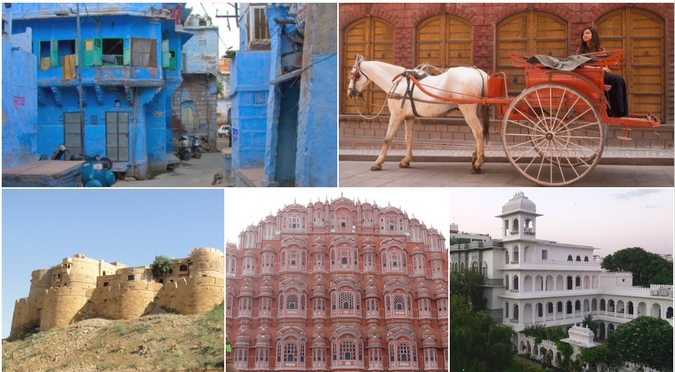 Rajasthan is right out of a fairy tale. There are historical castles, sand dunes, magical landscapes, and best of all – color themed cities.

In my opinion, Rajasthan is one of the safest and cleanest states of India. Rajasthan Tourism surely deserves a pat on their backs for doing a good job. It is the land of luxury because of its Maharaja heritage and the opulence is visible pretty much everywhere – even on the train stations.

There are many reasons why I love Rajasthan and keep visiting it every year. One of the main reasons is that the state is massive and it is not possible to cover it in just one visit. Another reason is that I love how Rajasthan’s top cities are color themed. There is a pink city, a blue city, a red city, a white city and even a golden city. Did you know that? Now you do!

Let me introduce my favorite color themed places to visit in Rajasthan. If you’re visiting Rajasthan for the first time, you may want to start off by visiting these cities first. It is very easy to visit most of these destinations by train, car or even air from Delhi. You can also check out this post for tips for traveling in Rajasthan.

Places to Visit in Rajasthan that are Color Themed 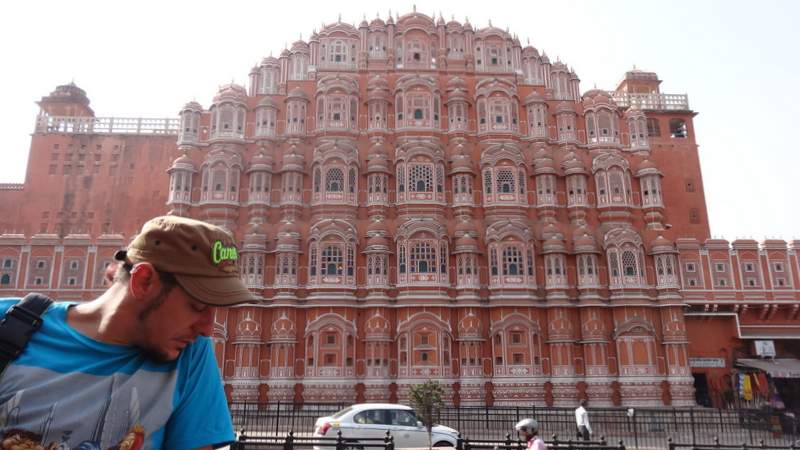 Jaipur is the capital of Rajasthan and is close to New Delhi; hence it is one of the most visited cities of the state. It is a part of India’s famous golden triangle route of Delhi, Agra and Jaipur that covers Taj Mahal – one of the seven wonders of the world. 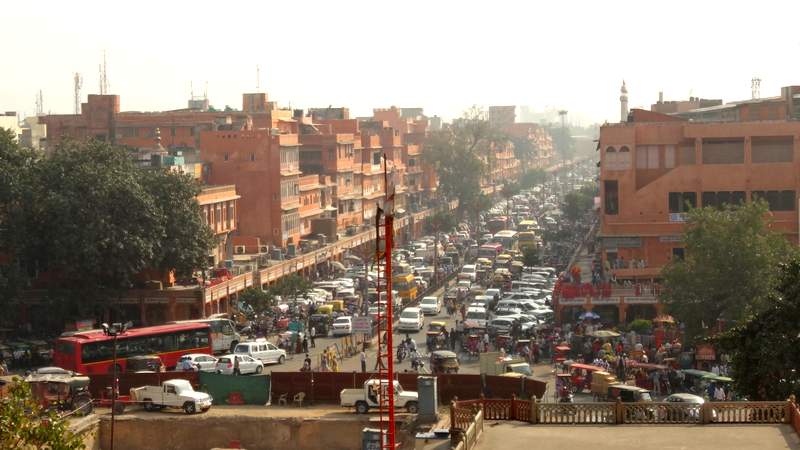 Jaipur is known as the Pink City of India because most of its buildings were originally painted red in the eighteenth centaury but were repainted in 1876 and turned amber pink.

There are many amazing places to visit in Jaipur but my favorite is Nahargarh fort because of the amazing view it offers. You can also visit the magnificent Amber fort, Jaigarh fort, Jal Mahal, Hawa Mahal and Jantar Mantar.

Where to stay in Jaipur

I highly recommend you find a hotel that’s close to the old part of the city, which is called the Pink City so that you can explore it by walking.

We stayed in a charming haveli called Rawla Mrignayani Palace and loved it. One of my favorite things to do in Jaipur is walking in the Pink City market, eating delicious Rajasthani street food and buying colorful handmade clothes. 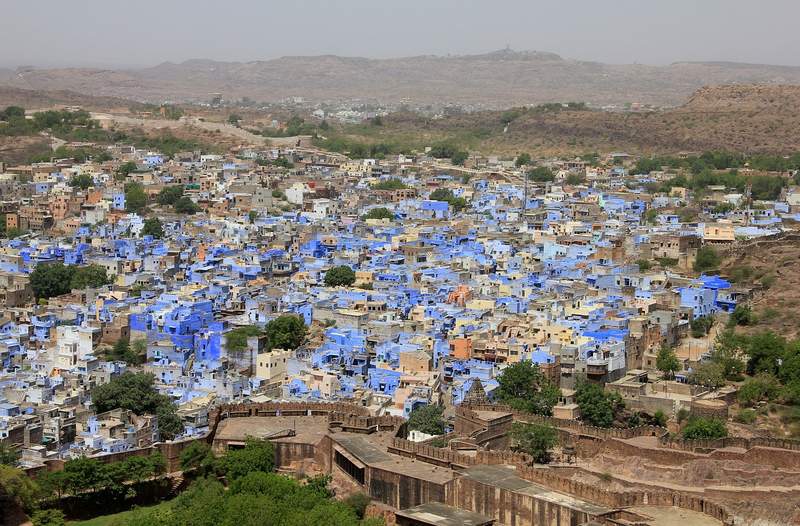 Over the last few years, Chefchaouen in Morocco has suddenly gained international popularity because it is blue themed but India’s Jodhpur is no less. It on the edge of the Thar Desert and hence is also called the Gateway to Thar.

Just like Jaipur, it is the old part of Jodhpur that’s blue. This part of Jodhpur is called Brahmpuri and literally every house and building here is colored in different hues of blue. 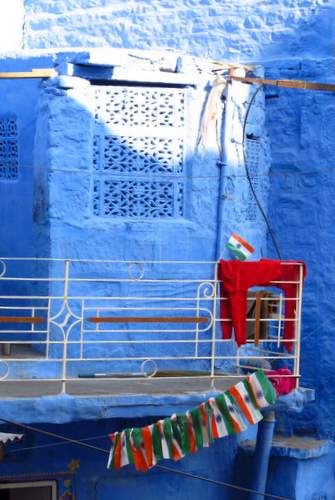 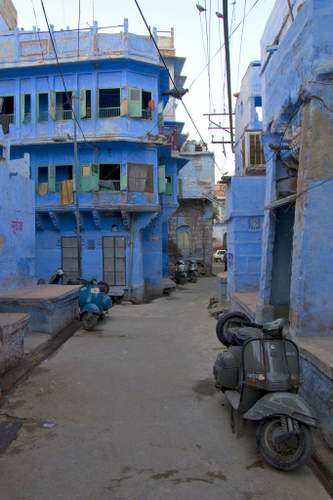 If you’re looking for things to do in Jodhpur then you must include Mehrangarh Fort, Umaid Bhawan Palace, and Balsamand Lake in your Rajasthan itinerary.

Where to stay in Jodhpur

You can book in Umaid Bhawan Palace, Raas, or Marugarh resort for an extremely luxurious “Maharaja” like experience. 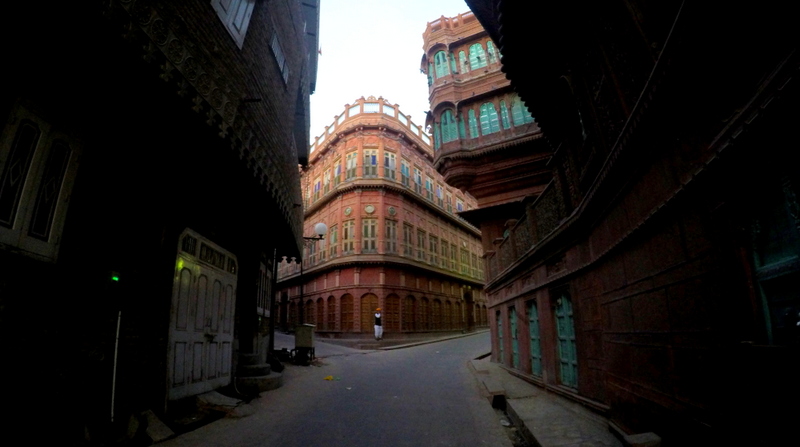 Bikaner is my favorite cities in Rajasthan and it is the most overlooked one, because of which it has still managed to retain it’s low-key charm. Not many people know much about this city apart from its famous namkeen (salty snacks) or the famous rat temple, but there is so much more. 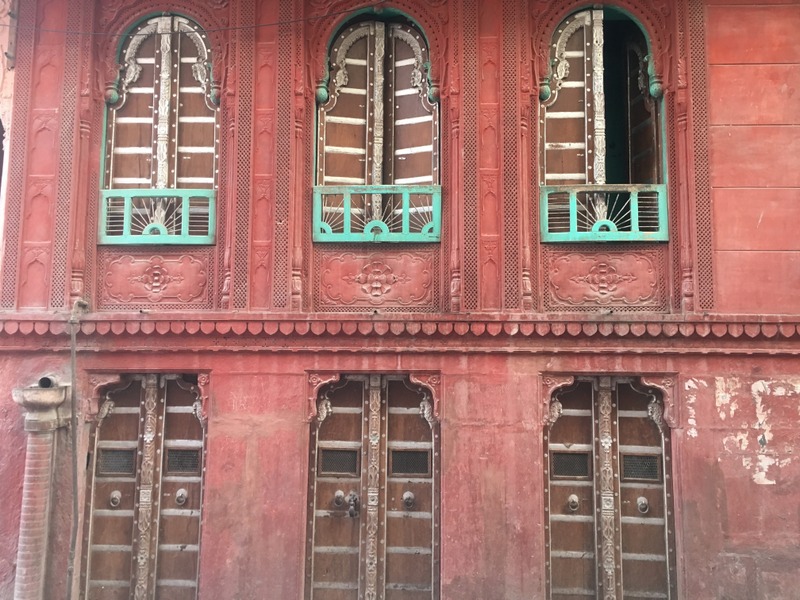 While you’re in Bikaner, you can visit Junagarh fort, Laxmi Niwas Palace, Lalgarh palace and also the nearby Gajner Sanctuary. However as per me, the best thing that I did here was walking around the streets of Bikaner’s old town. This is where you will find some old forgotten havelis that were built in the eighteenth centaury using red sandstones by Bikaner’s rich merchants. Be sure to check out my travel guide for Bikaner that has essential information about what you can do here. 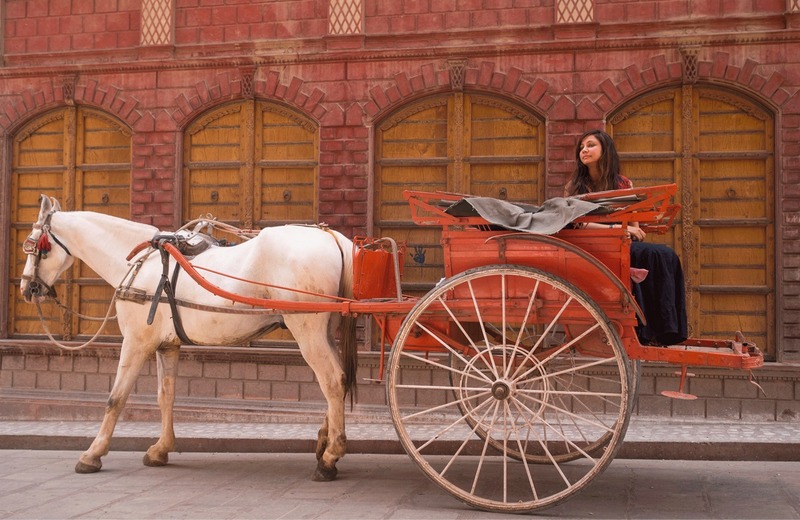 Where to stay in Bikaner

The best place to stay in Bikaner is Narendra Bhawan, which was once Bikaner’s Maharaja’s residence. You can also stay in the nearby Laxmi Niwas Palace or Lalgarh Palace.

Udaipur – the White City (or the Lake city) 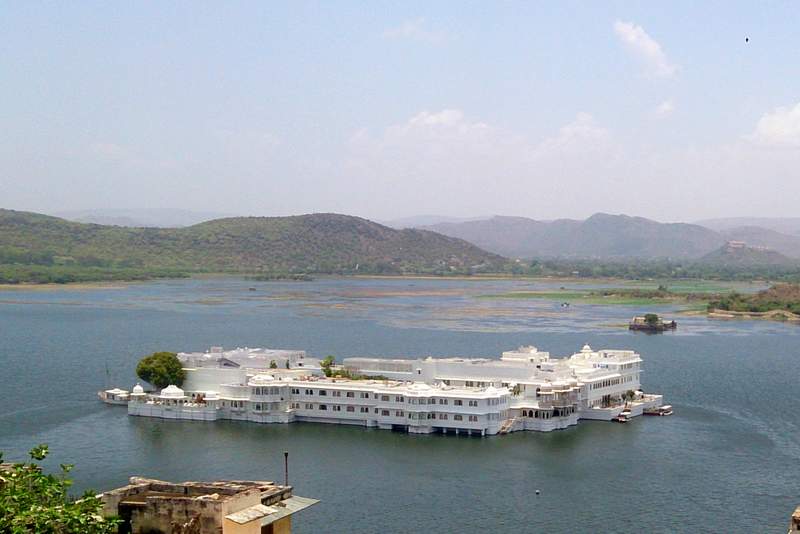 White lake palace in Udaipur – Places to visit in Rajasthan

Udaipur is more commonly referred to as the city of the lakes but it is mostly white because of the use of white marble in most of the palaces here. 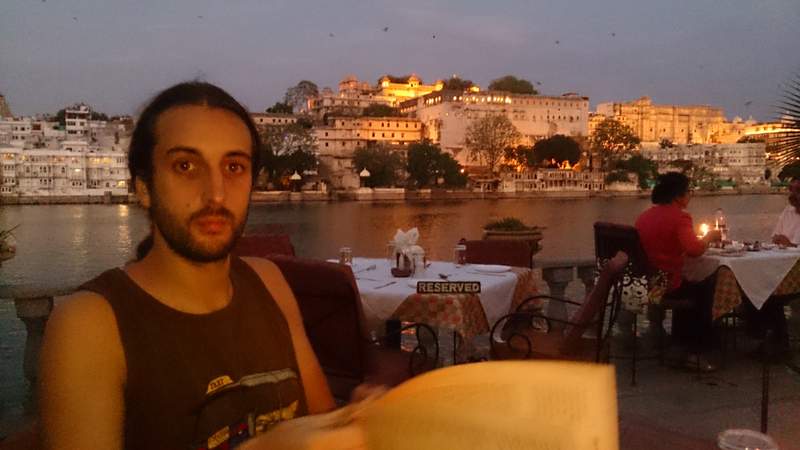 Udaipur – the white city of Rajasthan glows after sunset

Because of its many lakes, Udaipur is one of the most romantic places to visit in Rajasthan. A part of the shooting of a James Bond movie – Octopussy happened here. 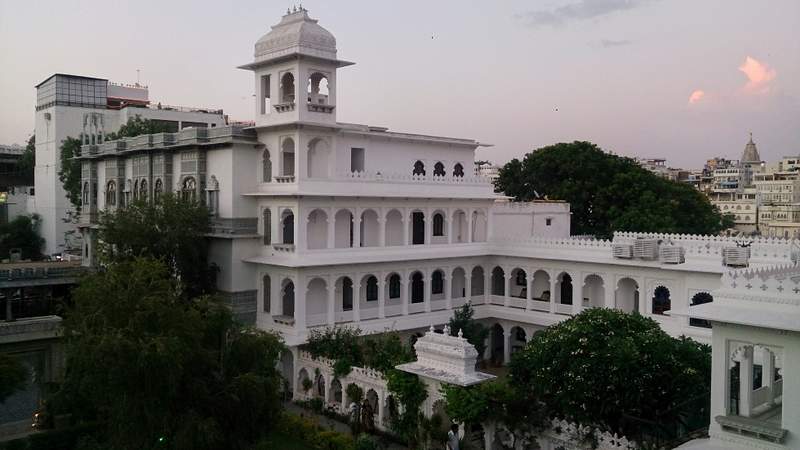 Udaipur has some seriously gorgeous viewpoints but some of my favorite ones here overlooks the Lake Pichola. This is not the biggest lake but is the most scenic one because of the old buildings that are around it. 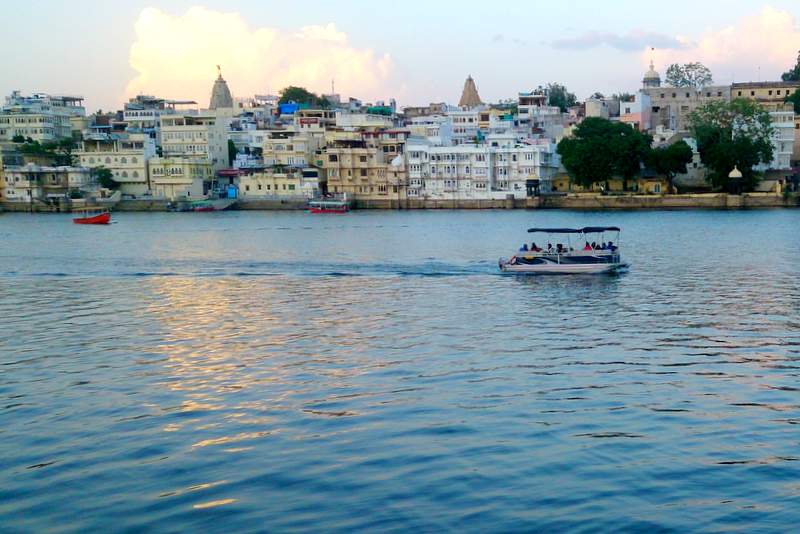 If you visit Udaipur, be sure to visit Udaipur city palace, Fatehsagar Lake, Doodh Talai and Saheliyon ki Bari. You can also visit sites that are river islands, such as Nehru Garden which is a park inside Fateh Sagar lake, Jagmandir which is a temple inside Pichola lake or the luxurious Taj lake palace.

Where to stay in Udaipur

For a once in a lifetime experience, stay on a place in the middle of the lake – Taj Lake Palace. Or you can also consider Leela Palace, Amet Haveli, or Jaiwana Haveli. 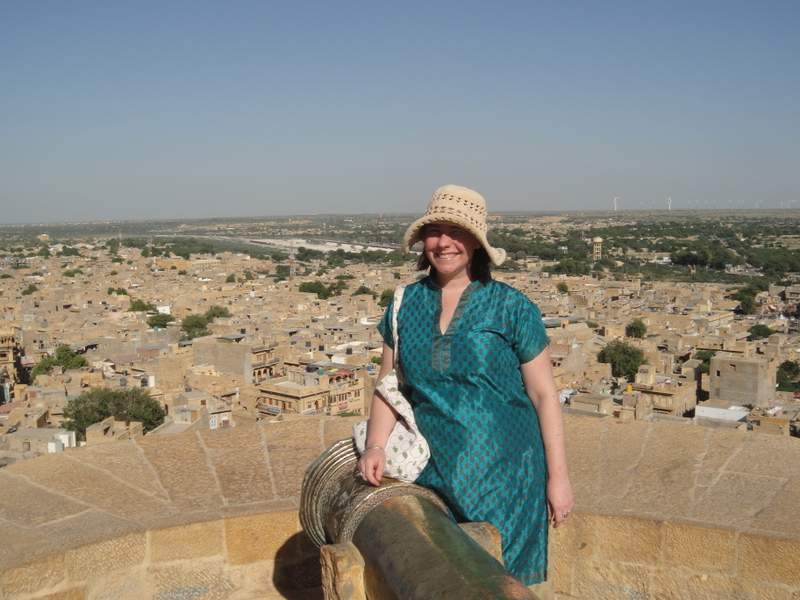 Cannon viewpoint inside Jaisalmer Fort – the Golden city of Rajasthan

Jaisalmer is the most Westerly city of Rajasthan and in my opinion is the most beautiful one because it is a fully preserved city. Unlike the other Rajasthani cities on this list, the entire Jaisalmer is golden and every building looks like it is a part of the fort (but it isn’t). 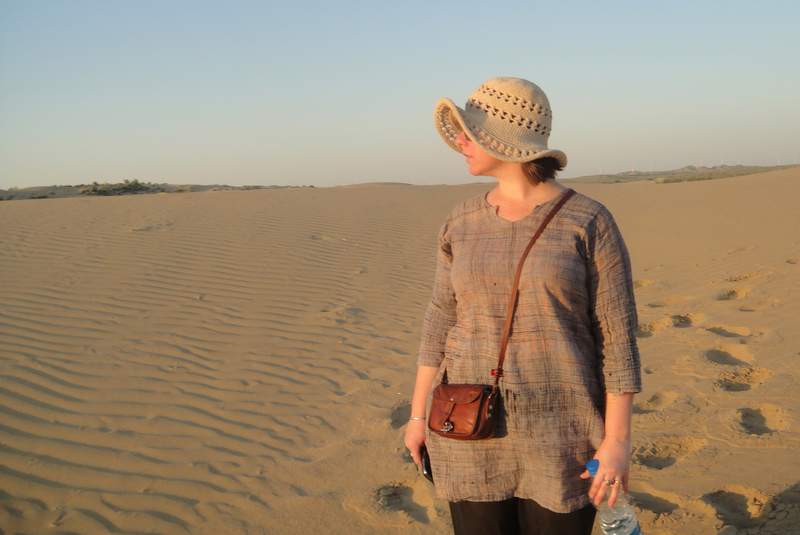 Jaisalmer Fort is called Sonar Qila, which means golden fort and is a UNESCO World heritage site. There is a little walled city inside the Jaisalmer fort itself. How cool is that! 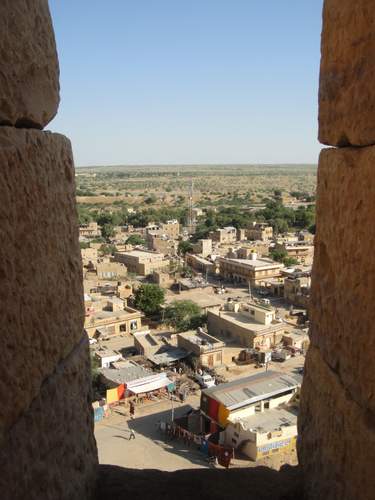 The view from Jaisalmer Fort, Rajasthan 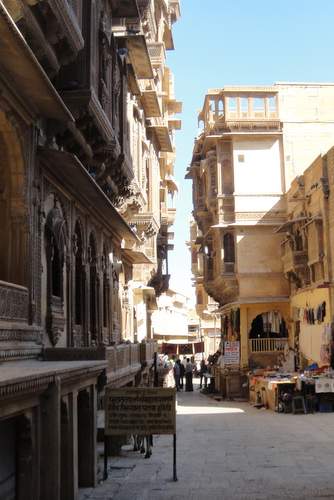 The Golden Streets of Jaisalmer, Rajasthan

One of the best things to do in Jaisalmer is to get lost in its maze like streets outside the fort. Or you check out some of the more touristy places to visit in Jaisalmer such as the fort itself, Ghadsisar Lake, or the city’s many havelis. 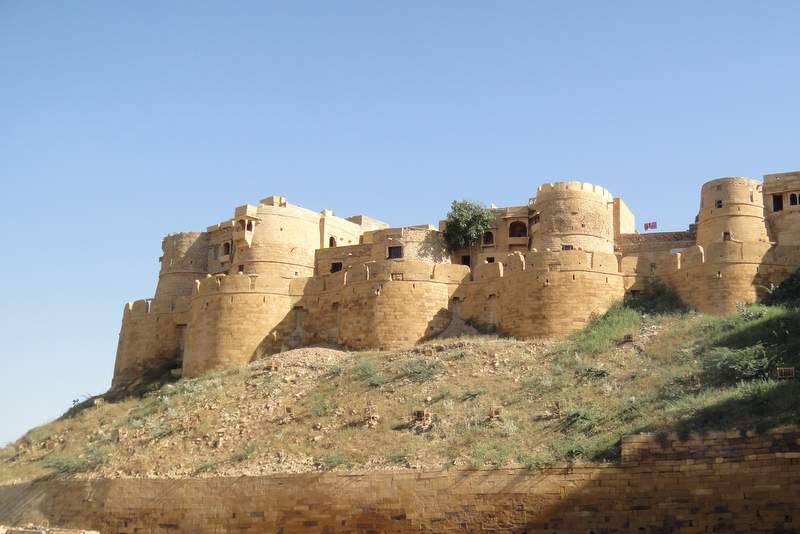 Considering how close Jaisalmer is to the Thar Desert, a camel safari on the nearby sand dunes is an experience that you should not miss. You can visit the Khuri Sand dunes or Sam sand dunes – they’re equally good.

Where to stay in Jaisalmer

For an unforgettable experience, you can stay in the middle of the desert in Suryagarh Palace or stay in one of the hotels inside the fort such as Killa Bhawan.

When to visit Rajasthan

Please understand that most parts of the Rajasthan state are arid areas, so the best months to visit are the winter months. Visit between October to March but be prepared to handle how it gets very cold at night. The peak tourist season in Rajasthan is from December to February.

Have you visited Rajasthan already? If so, I’d love to know what’s your favorite place here. Let me know in the comment! To know more about Jaipur, check out this post about Jaipur’s city palace.