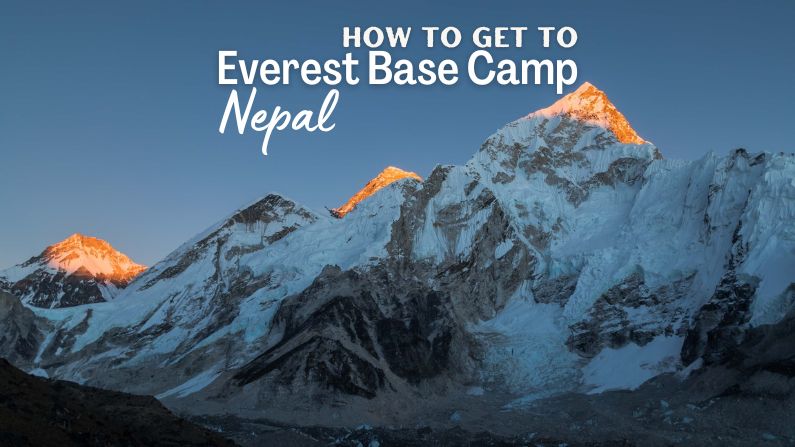 How to Get to Everest Base Camp, Nepal – Trek Itineraries + Practical Info

The trek to Everest Base Camp (EBC) is long known for its unmatched view of the Everest. The route is immersed in the peaceful world of Tibetan Buddhism and scenes of the glorious Himalayas.

Everest Base Camp trek is Nepal’s most popular because of its breathtaking mountain views, great paths, and pleasant tea house-style trekking.

In this article, you will find a few options of the Everest Base camp trek routes. These hikes provide a glimpse into Nepal’s undeveloped side and the Himalayas that most tourists miss on the typical route. 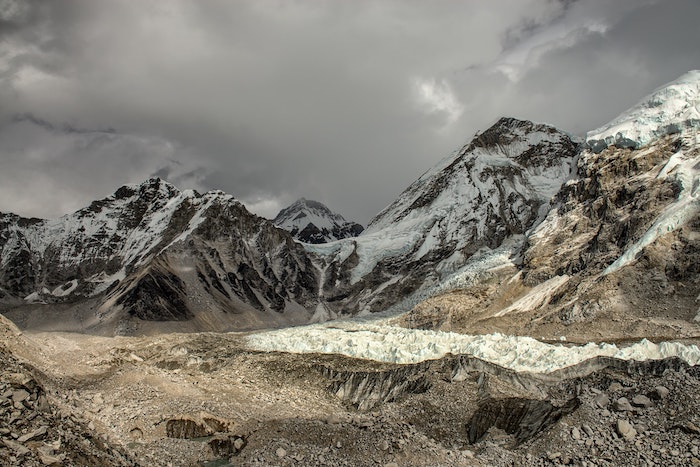 Everest Base Camp and the Khumbu Icefall Nepal via Unsplash

In order to visit the Everest Base Camp, you will travel through Khumbu Valley. It is one of the most famous valleys and Lonely Planet ranked it as the sixth best region in the world in which to travel.

You will also witness the glorious Sagarmatha National Park on the way. Moreover, the view of the world’s tallest four peaks: Mt. Lhotse, Mt. Everest, Mt. Cho Oyu, and Mt. Makalu, will make your trip worth the trek. 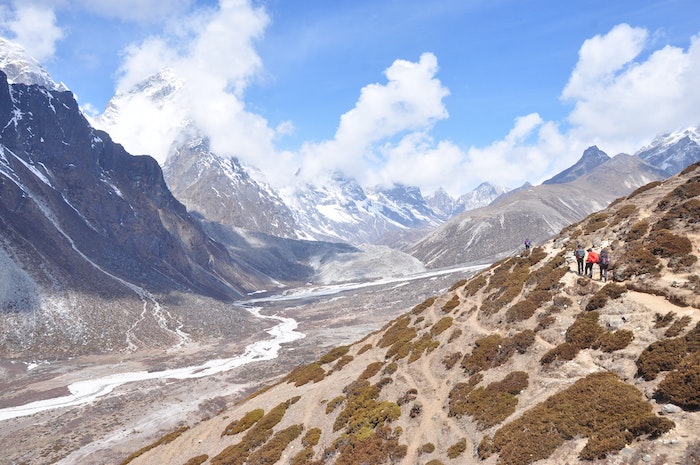 There were only two primary ways to get to the south base camp of Mt. Everest in Nepal 53 years ago: a trip from Kathmandu, a four-to-five-week trek. Alternatively, take a one-day bus journey to Jiri, walk for five to eight days to Namche, and then to Mt. Everest.

In 1964, Sir Edmund Hillary’s Himalayan Trust built a mountaintop airport and a dirt runway at Lukla. It gave travelers a shorter route to Mt. Everest.

Most people prefer the 35 – minute flight from Kathmandu to Lukla to begin their trek. However, only a few adventurous souls take the old-fashioned trek beginning at Jiri.

So, how to get to Everest Base Camp? Below are a few Everest base camp treks with itineraries and route information. 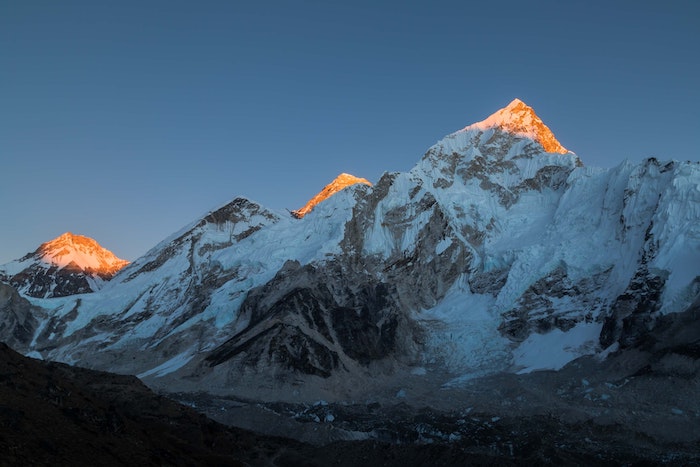 This is the most direct route from Lukla to the peak of Kalapatthar at 18,192 feet. Kalapatthar gives the best view of Mount Everest. This is a pilgrimage to the highest mountain in the world.

You take a short, scenic, and unforgettable early morning flight to Lukla from Kathmandu. You will start your trek from Lukla and downhill toward Dudh Koshi River. The trail includes passing the Chhupulung Ghat’s Sherpa town, along with large rocks dedicated mainly to Buddhist prayers, while heading to Phakding Village.

Your trek from Phakding to Namche Bazaar is one of the most mesmerizing as it lets you pass through the Pine forest and gives eye-pleasing views of numerous mountain peaks including Mt. Thamserku, Mt. Everest, Mt. Kusum, Mt. Kangtega, and Mt. Kangaroo. 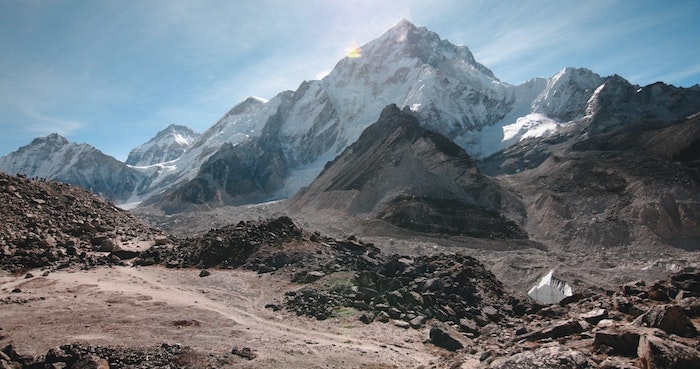 After a day of acclimatization at Namche, you trek to reach Tengboche after descending to the Dudh Koshi river through the rhododendron trees.

You will then reach Dingboche, passing by Pangboche village and appreciating the magnificent mountain Ama-Dablam. You will be spending your night here at Dingboche for acclimatization with a chance to witness Peaks Island and Lhotse.

After walking for a day, you will reach the highest point of the trek, the Kala Patthar (5,500 meters) in Mt. Pumori. You will witness numerous peaks from Kala Patthar, including Mt. Everest, Ama Table, Cholatse, Lola, Nuptse, Tabuchi, and Khumbutse. 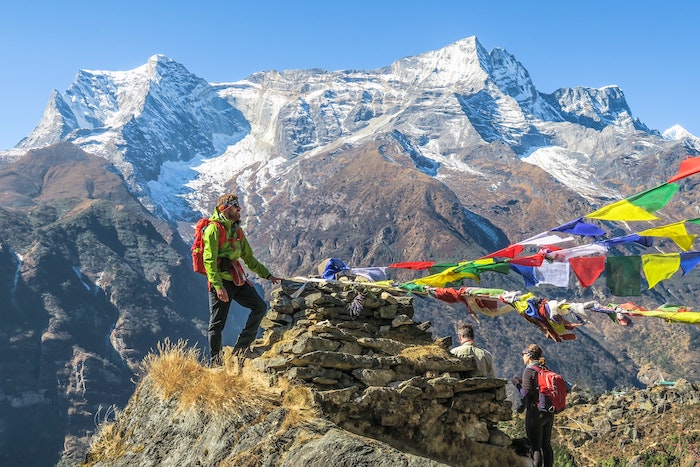 Then you head back to Namche Bazar via Ama Dablam and Tengboche. The next day you will pass through numerous settlements such as Manjo, Phakding, Jorsalle, and Benkar on your way back to Lukla.

You will then end your trek to Everest Base Camp with a 35-minute flight to Kathmandu airport from Lukla airport.

2) Jiri to Everest Base Camp 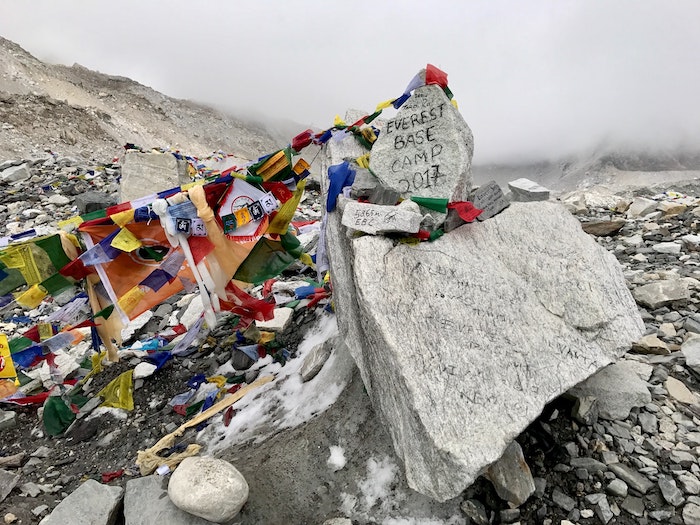 Traditional Everest Base Camp routes are popular with individuals who prefer to avoid the Lukla flight. The flight from Lukla to Kathmandu is regarded as one of the most dangerous in the world.

During the 1950s, the Jiri Everest base camp trek routes were well-known and famous, and expedition.

The journey to Jiri begins with a 10-hour drive from Kathmandu Valley. You begin walking from Jiri to Lukla, where the famous EBC Trek route begins.

Overall, the trek from Jiri to Lukla takes between 5 and 8 days, depending on your pace. Therefore, it is recommended that you add at least a week to your overall trekking duration and fly out of Lukla.

The trek allows you to explore Nepal from two different perspectives. The path from Jiri attracts very few visitors, and the tea houses are poorly developed, with little more than Dal Bhatt on the menu.

You may discover the lovely forest, terraces, farmlands, and Dudh Kosi river while trekking from Jiri to Lukla and avoid the crowds of trekkers.

The walk into Lukla is challenging, despite the low height, as it passes over various valleys, ascends, and descends multiple ridgelines as it traverses the base of the Himalayas. Most hikers agree that the lowest part of the trail is the most difficult.

After arriving in Lukla, the hike to Everest Base Camp follows the standard route.

3) Three Passes and Everest Base Camp 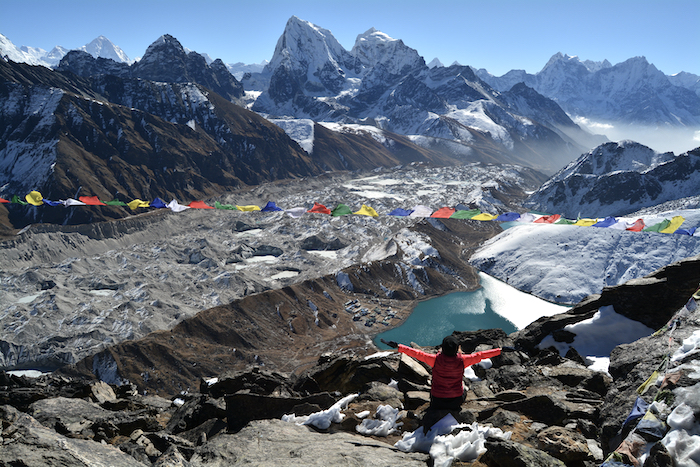 The trek from Three Passes to EBC takes you through Khumbu Region’s beautiful wilderness. It is a difficult path that needs crossing 3 high-altitude passes, while a view of 4 of the world’s 10 tallest mountains makes it worthwhile.

The route begins in Lukla and changes after you reach Namche Bazaar. You will hike up the Bhote Koshi River for many days, reach the Renjo La Pass, and enter the Gokyo Valley after leaving Namche Bazaar.

You can witness numerous peaks, including Makalu, Cho Oyu, Mt. Everest, and Lhotse from Renjo La and Gokyo Ri’s top.

You will also be taking in the spectacular views of Mount Pharilapche and descending the 36-kilometer Ngozumpa Glacier, leaving behind the Gokyo Ri.

Then it’s on to Gorekshep and Everest Base Camp via Cho La (5400m), with spectacular views of Ama Dablam.

The path departs from the main road again and heads across Kongma La. Cholatse, Nuptse, Ama Dablam, Pokalde, Lhotse, and Makalu can all be seen from the pass.

You will cross the pass while descending into the Niyang Khola Valley, stopping in Chukkung, the starting point for hikes to Island Peak.

The rest of the path descends to Lukla through Tengboche and Namche, as is customary.

The trek begins with a flight from Kathmandu to Tumlingtar. The tiny settlement of Tumlingtar serves as a starting point for trekkers heading to Makalu Base Camp.

This rarely opted route takes around nine days to trek from Tumlingtar to Lukla. However, climbers traveling to the hiking peak of Mera use the section closer to Lukla. 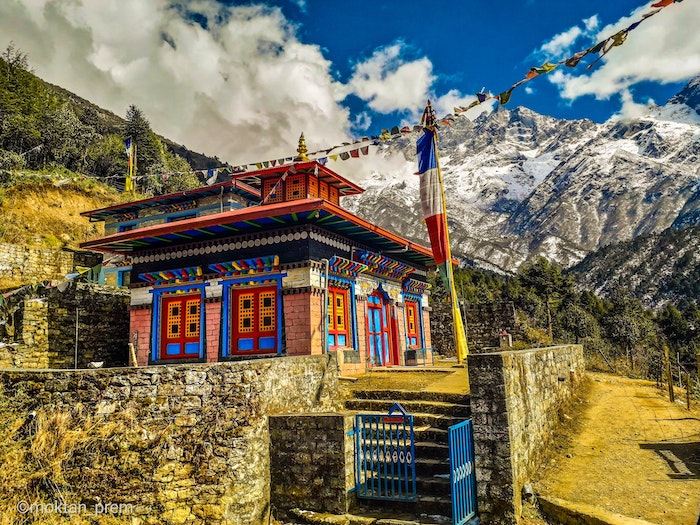 This trail is truly off the beaten path, and the experience is unique because the tea shops are pretty basic, with few amenities and minimal menus. The locals are kind and accommodating and will go out of their way to ensure you have a fantastic day.

Tumlingtar (460m) is located at the foot of the Himalayas and can be extremely warm, so dress appropriately. The journey from Lukla to Tumlingtar takes around nine days and can be used as an exit or entry point into the region.

One benefit of using it as an entry is allowing you to acclimate and become in shape before confronting base camp. It traverses the foot of the Himalayas, similar to the Jiri journey, and as a result, there is a lot of up and down. This trek section adds roughly 8 to 9 days to the total trek time. 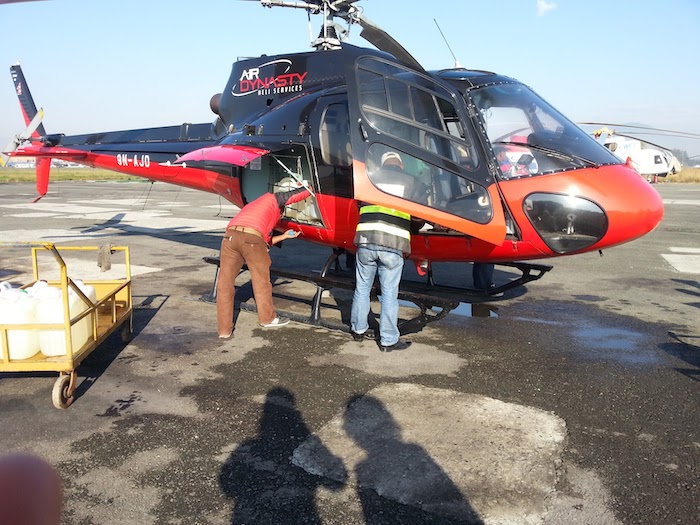 Helicopter getting ready for Everest tour

The Everest Helicopter Tour, a brief yet worth a try helicopter tour to Mountain Everest base camp. This Everest Base Camp Helicopter Tour is ideal for individuals with a tight schedule and those not willing to hike for many days.

However, the most fantastic view of the world’s tallest mountains, including Mt. Cho Oyu, Mt. Ama Dablam, Mt. Nuptse, and Mt. Everest, can be seen from Kalapatthar.

Depending on the weather conditions, the helicopter lands at Kalapathar or Everest Base Camp for a 10 to 15 minutes exploration and sightseeing stop.

This shorter version of the Three Passes Trek does not include Kongma La or Everest Base Camp.

It cannot be considered an alternate route because it does not lead to Everest Base Camp, but it is a fascinating walk in the region with spectacular views of Everest. It takes the conventional route from Lukla to Namche before diverging and following the higher terrain to Dole and Machhermo.

The walk then ascends to the Ngozumpa Glacier’s terminal moraine, following the glacier’s lateral moraine to Gokyo and its six lakes. Gokyo offers a day of rest, with the option of climbing Gokyo Ri for spectacular views of the surrounding peaks. The renowned mountain of Pharilapche (6017m) rising over the turquoise waters of Dudh Pokhari has been the subject of numerous photographs.

The hike leaves Gokyo and passes Renjo La (5360m) before descending and following the Bhote Koshi canyon for several days back to Namche. One of the journey’s highlights is the view of peaks Makalu, Lhotse, Everest, and Cho Oyu from the top of Renjo La.

Best time for the Everest Base Camp Trek

Due to the harsh weather in the Everest Region, the peak and the best seasons for Everest Base Camp Trek are spring and autumn. Other seasons are the least visited.

For each choice, there is a trekking equivalent. The shortest trek route, the classic Everest Base Camp Trail, is the most direct way. The longer you’re on the trail, the more expensive your trip is. Accommodations vary.

Tips for the Everest Base Camp Trek 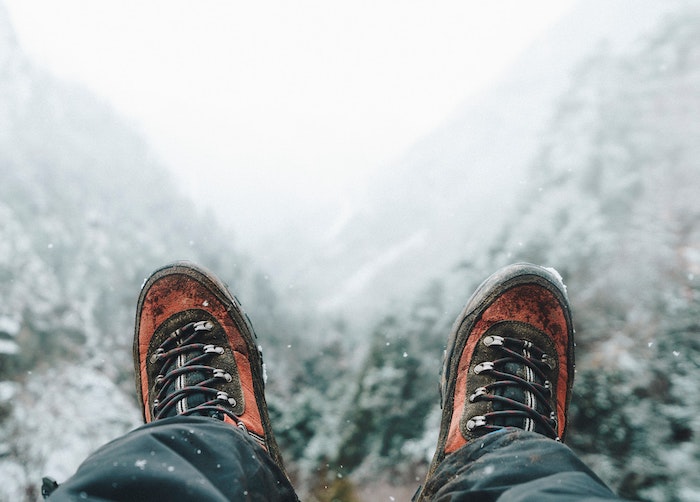 Trekking in the Everest Region needs some preparation, ranging from physical fitness to mental preparedness. Train to trek and plan for extra hard days at the end.

To save money, buy the trekking gear in Nepal. You will get everything in Kathmandu at a much better rate than anywhere else in the world.

Don’t forget to break your shoe before you trek. By that I mean, walk in your trekking shoes to a few times everyday to make sure they adapt to your foot shape before you start the hike.

Carry Nepalese Rupees as well as US Dollars. You won’t find any ATMs so prepare in advance.

Everest Helicopter tour is a great alternative for the people who wants to see the closest version of Everest without trekking.

PS: Drifter Planet contains affiliate links. If you make a purchase through these links, we will earn a little commission at no extra cost to you.   We are a participant in the Amazon Services LLC Associates Program, an affiliate advertising program designed to provide a means for us to earn fees by linking to Amazon.com and affiliated sites.