10 Beautiful Spots in Cappadocia that are Instagram Worthy [ Turkey ] 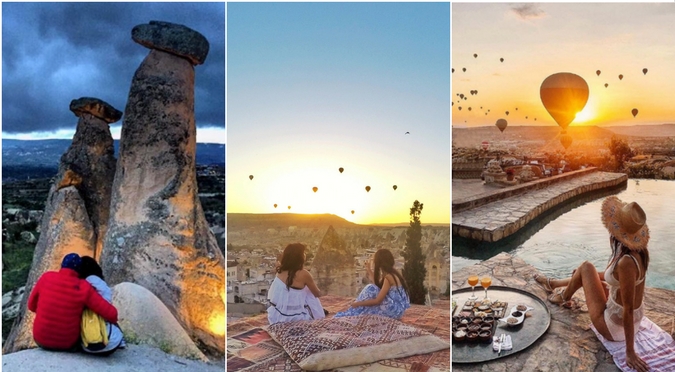 “Can you tell me the EXACT location of this photo?”

Yup, that’s the most frequently asked question when people see my Cappadocia pictures. In fact, this question comes to me so often that I decided the easiest thing to do would be to just write a post about my favorite Instagram spots of Cappadocia. Also, the fact that I’m still obsessing over this place helps.

This is my fourth blog post about this gorgeous destination in Turkey. You can’t really blame me for still being fixated, just look at the photos! Yes, Cappadocia in Turkey is perhaps the most magical place that I have ever seen.

Anyway, if you’re a new here and have not been following me on social media, I must confess that my visit to Cappadocia got me a lot of attention on Instagram. Suddenly I had a lot of new followers and they wanted to see more pictures of Cappadocia. Some of them even booked their tickets and are in touch with me about booking a hot air balloon ride, hotel and what not.

If you’re heading to Cappadocia as well [you should], and want to know some of the best photography spots, then you’re going to probably bookmark this post. Be sure to read our travel tips for Turkey and this travel guide, which will help you plan your trip. This part of Turkey is really pretty and there are definitely way more than ten beautiful spots in Cappadocia. It was very difficult just to choose 10 spots, but here you go.

If red valley wasn’t red enough, things get a little crazy as the sunsets. There are no typical fairy chimneys here but you will get to witness a sight so epic that it will spoil your future sunset experiences. Don’t just leave this spot after the sunset; it gets even better after it because it gets a little empty.

Red valley’s sunset point overlooks the entire valley and you can find your own spot up on the rocks. It is is near Ortahisar and is famous – but you can’t really reach here on public transport. Get yourself a rental car or hire a taxi to reach here.

This spot is so pretty that I saw three newly wedded couples that were here for their wedding shoot.

Here are a few other pictures of this same spot that I found on Instagram.

Here’s how awesome it looks when it snows!

BTW: If you’re near Red Valley, then don’t miss the nearby Pink Valley. I missed, but you shouldn’t. I want you to check THIS picture out.

Here is one last picture before I talk about the next spot.

As much as I hate putting a hotel’s balcony so high on my list, I have to admit Sultan Cave Suites deserves this mention because it’s too darn gorgeous. This spot became one of the most popular locations in Cappadocia after Instagram superstars – DoYouTravel and Gypsy_lust did a photo shoot here.

If it wasn’t for my friend Eva (who is an amazing photographer), I was not going to make an effort to wake up at 4 am and walk to Sultan Cave Suites for a few sunrise photos. I had to gather a lot of courage for these pictures because I’m very shy when it comes to posing. Oh, you must know that I did not stay in this hotel and neither do I know if it is a good place to stay, but it sure is pretty. Due to the extreme popularity, I think they now only allow guests to this spot for photos. Here is an epic sunrise shot with balloons all around. This was at Sultan Caves Suites. That is my friend Eva and me. Here are some of our best photos:

Here’s Izmir – the real Sultan of Sultan cave suites. He’s the resident cutie of this place.

Holy shit, this is Planet Tatooine!

Yep, that’s exactly what I said when I reached the famous sunset point in Göreme. I sat next to the edge and stared at the distant caves that were carved inside the fairy chimneys. It felt that at any moment, little Anakin Skywalker was going to appear out of nowhere before he became a Jedi.

As much as this looks like Tatooine, I hate to tell you that Star Wars was not shot here. Some say that George Lucas wanted Göreme as the shooting location but it was never approved because of fairy chimneys (they look like penises). But hey, this could all be a made up story but who cares when it looks as pretty as this.

Yes we all know that they look like penises, but a polite way to refer to them is “fairy chimneys” or “peri bacalari” in Turkish.

It took Mother Nature around a million years to carve out these fairy chimneys and they are all over Cappadocia. I saw them for the first time when I went for a hot air balloon ride with Turkiye Balloons and our balloon kind of flew very close to these giant mushrooms. [You can read about my Hot Air Balloon ride experience here].

There is not just one place where you can see these Fairy Chimneys because they are all over Goreme. If you’re looking at some of the best places to photograph the Fairy Chimneys, I’d recommend you go to is Zemi Valley, which is smaller than the bigger and more popular Bagli Dere Love Valley. In fact, the locals say that even a part of Zemi valey is also called Love Valley.

Zemi valley is very close to Goreme open-air museum and Bagli Dere is 6-ish KMs away. By the way, I have been told that Love Vallay has been named so because of the abundance of penis shaped formations.

If Cappadocia’s landscape couldn’t get weirder, Uchisar Castle is the cherry on the icing. This castle is on the highest point in Uchisar and overlooks the nearby towns. Uchisar castle looks like the aliens hurriedly created it and did not pay attention to the symmetry.

The entrance fee to Uchisar castle is 5 TL and it is easy to explore everything inside this castle in less than 30 minutes. The best part according to me is the view from the top, which is obviously better around the sunset.

How can I not put this spot on this list when the pool from the view looks like THAT. I’d love to go back to Cappadocia, just to take an early morning dip in this swimming pool. Museum Hotel, Uchisar is a boutique hotel where the room prices generally shoot up to $300 per night. This hotel is perfect for those who are looking for the ultimate luxury experience in Cappadocia. This hotel was built out of thousand-year-old cave houses.

Three Sister Rocks in Ürgüp is actually a free place to visit that’s along the road. There is a panorama viewpoint here, which is free to visit. There are three giant rocks that are cone shaped with smaller rocks on each tip. This spot is also called Peri Bacalari and there are a few stories associated with these three rocks.

Some say that these rocks can be imagined as a family – mother, father and a child. Others say that there is a legend that is associated with a father trying to marry off his three daughters, who later turned to rocks. Here’s a picture from Mesut from New Goreme tours, who was our tour guide and took us to this place along with many other places in Cappadocia.

Here are a few more that I found on Instagram.

Kale Konak Hotel in Uchisar is not as popular on social media as many other hotels are, but it doesn’t mean it is not better. This hotel has Uchisar castle on one side and lower level scenery the other, resulting in stunning views. I stayed in two different hotels while I was in Cappadocia and Kale Konak absolutely took my breath away.

I had a cave suite to myself while I was here, and it was more like a cave house because it had two bedrooms, one toilet, one sitting room, two levels of private terraces and what not. I had the luxury of watching the sunrise [and sunset] in my own private terrace.

The sunrise here looks amazing because in the distance you can see the lone Mt. Erciyes and on the other side there is the strange Uchisar castle. Here’s a picture that will tell you how close Uchisar castle is from here.

One of the first places that I visited in Cappadocia was Soganli Valley, which has abandoned churches and monasteries inside caves. There are little pigeon windows that are carved on these caves as well, that adds to the mystery.

Even though the structures here were really interesting, I was surprised to see that there was no one around except for our group. Yes, Sognali valley is indeed gorgeous but I loved learning about its history as well. Some of the cave churches date back to the 9th centaury and you can even see some intricate paintings inside them. Sadly, some of these frescos were damaged. 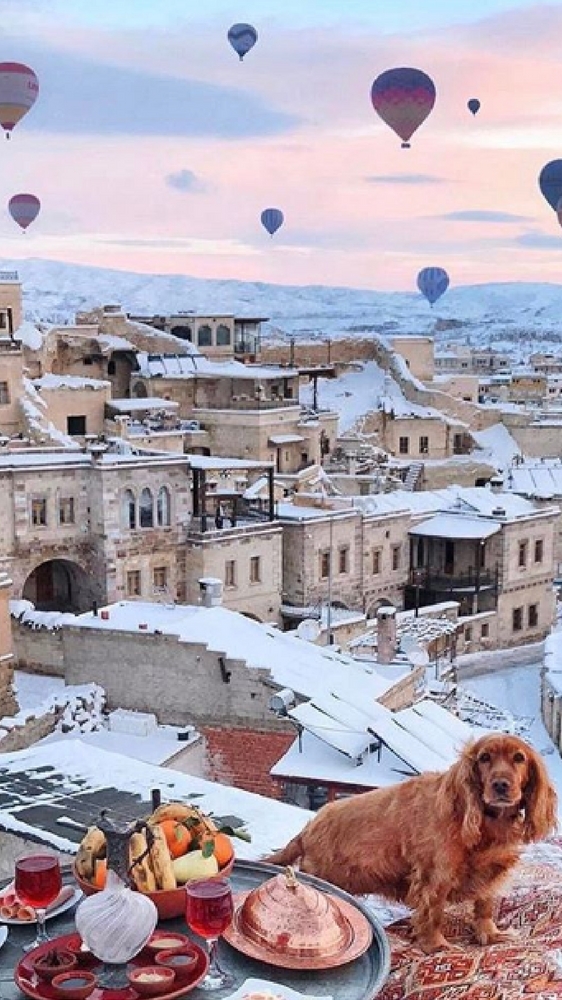 Beautiful Spots in Cappadocia, Turkey – that are Instagram Worthy 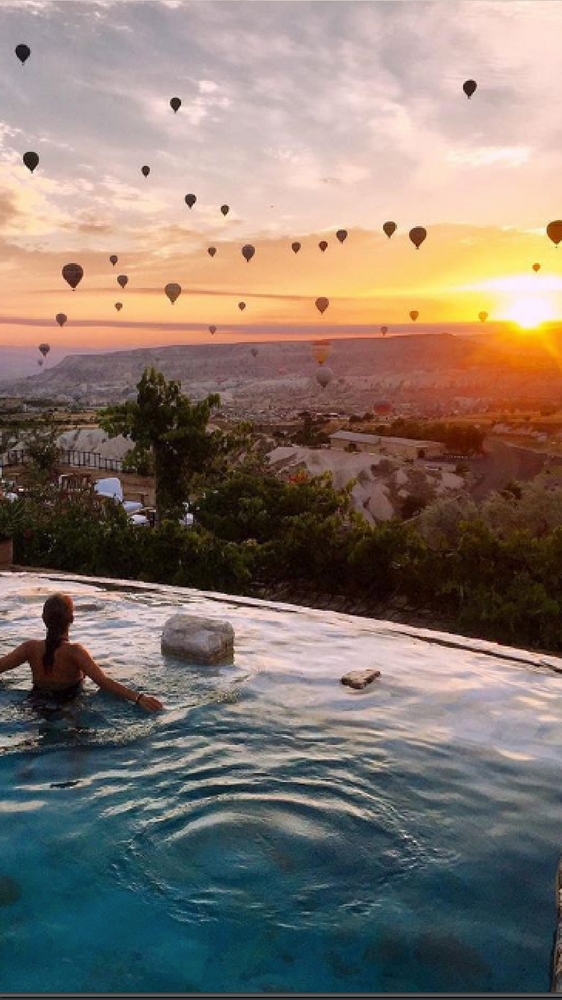 Swimming pool with a view of hot air balloons in Cappadocia, Turkey 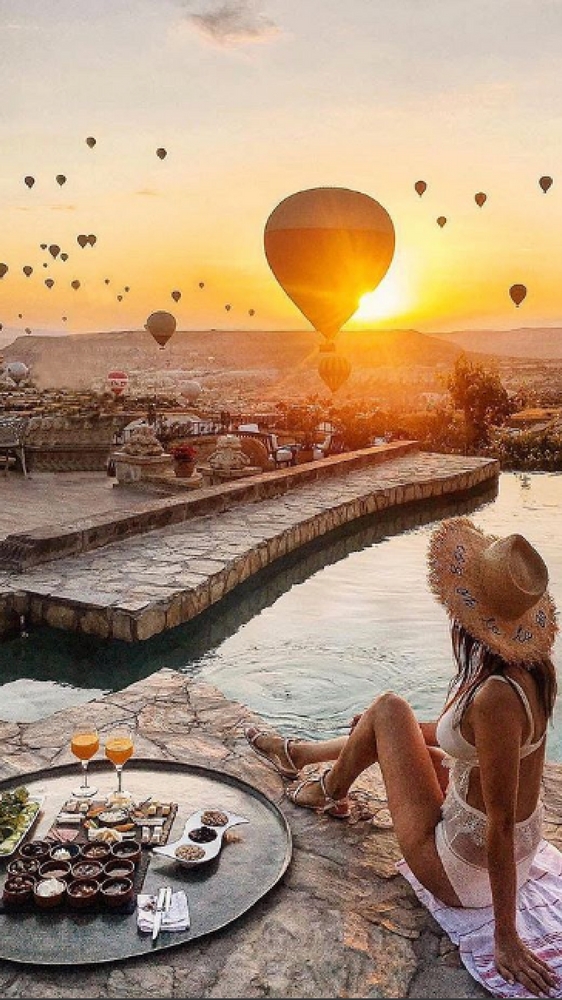 Swimming pool with a view of hot air balloons in Uchisar, Cappadocia, Turkey