This guest post about Almería, Spain has been written by Sonja Thomson as a part of “Explore Like a Local” series. It’s where many scenes of Game of Thrones season 6 were shot for Dorne & Dothraki Sea! Explore Like a Local is an initiative by Drifter Planet to help you get insider tips about destinations all over the world. Want to write about your hometown? Contact me! 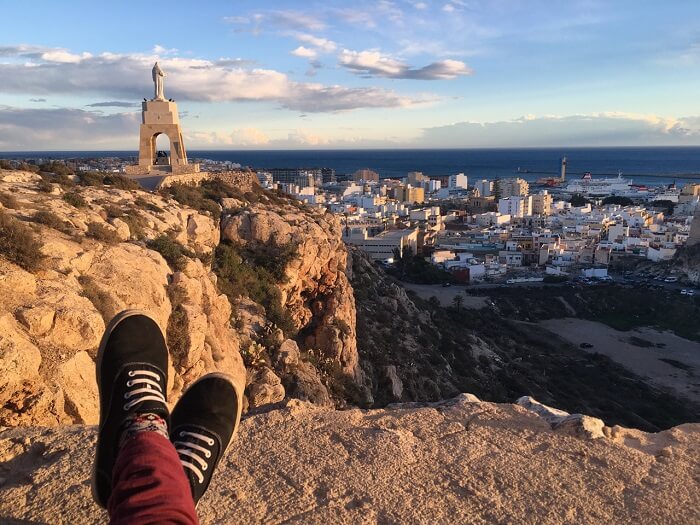 The statue of San Cristóbal, The Alcazaba, Almería, Spain

Almería is in the South East corner of Spain, and it’s a city than can be forgotten amongst the abundance of places to see in Andalusia. It has way too much to see to be at the bottom of the list though. The Alcazaba, an ancient fortress, watches over the winding streets of the old town, and there are countless restaurants to enjoy proper tapas in the sun. 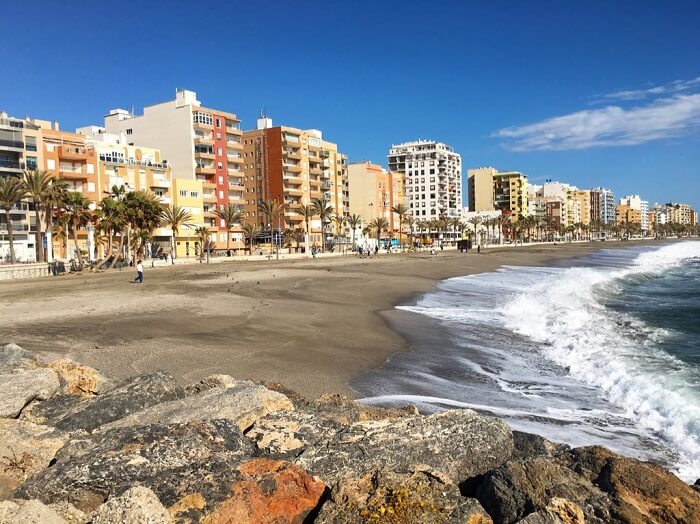 The city itself has a beach, but if you have the time and means to get out of town, then you can explore the gorgeous bays in Cabo de Gata National Park, or take in the other worldly landscape of the Tabernas Desert, the only one in Europe and the location of countless film sets since the 1960s. A little further away (4-5 hours drive) is Valencia, another famous beach destination in Spain. Check this post for information about what to do in Valencia.

Where to stay in Almería on a budget 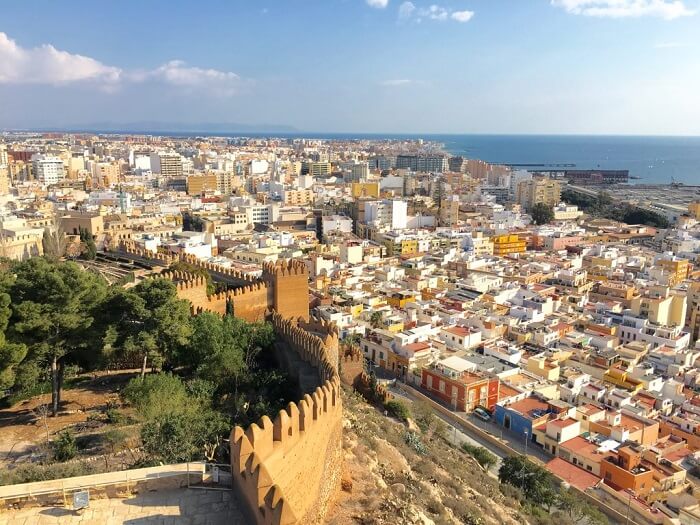 View from the Alcazaba, Almería, Spain

There are more private rooms and hotels to be found around the city, rather than dorm room hostels. Living in Almería is fairly cheap, and my friend and I can afford a 3 bedroom house for the two of us so we have friends and family stay with us. It means many people have spare rooms they let out too, so Airbnb is great option, or couchsurfing!

Things to do in Almería 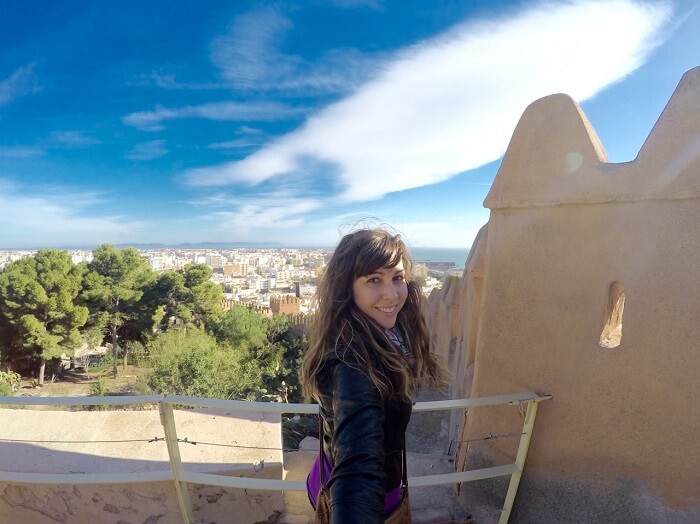 The obvious things to visit in Almería are the Alcazaba, the Cathedral and the beach. My favorite thing to do is find a great cafe or bar and relax and chat with friends. No one’s in a rush in Spain, and they don’t mind if you send hours sitting there! You can check out my top ten things to do in Almería for more ideas. 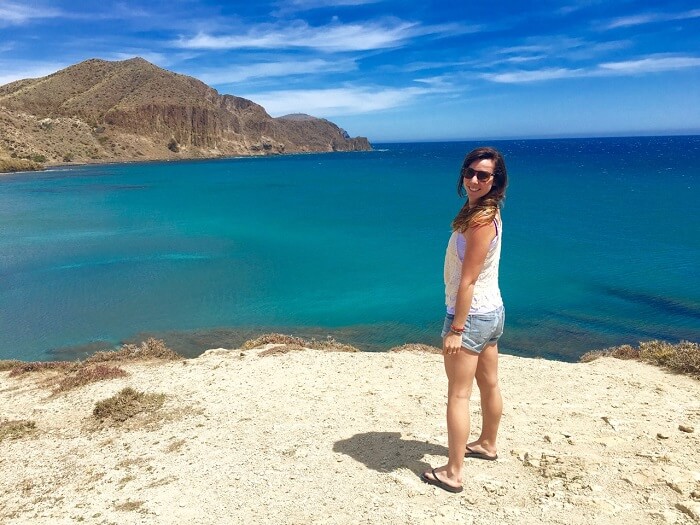 For something a bit different, under the streets of Almería there are tunnels and rooms that were built to shelter the residents in the Spanish Civil war. In the late 1930s the city of Almería was subject to a number of bombings. Now you can visit part of these tunnels on a small tour. Although the tour is only in Spanish, it’s worth reading up on beforehand and experiencing anyway. Plus it’s only €3! Just be sure to book in advance.

What to eat in Almería (and Where)

In southern Spain you can’t really go past the tapas. I hardly ever eat a full meal out, because the tapas here come free with your drink and you can choose extras for a cheaper price than a full meal! The beauty of tapas in Almería is that you choose from a list, unlike in some other cities where you get what you’re given. Since Almería is near the sea there are a lot of fresh seafood options, and the Jamon Iberico (ham) is really delicious too. 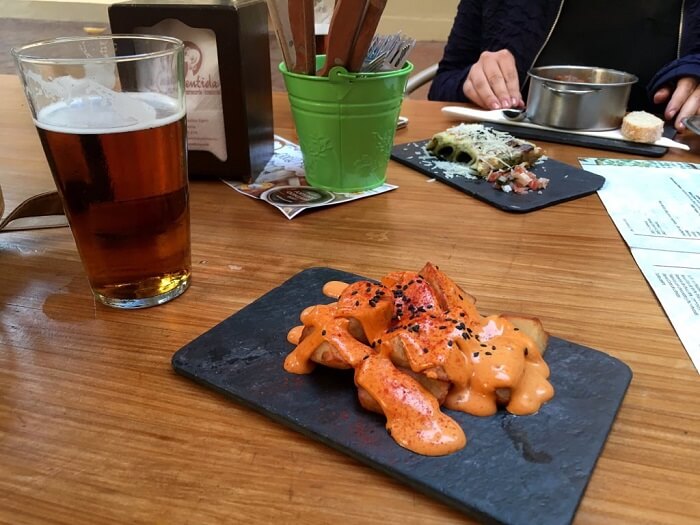 My favourite places are Cyrano, La Mala, and El Vino en un Barco, which are all located within the central city. They all serve great tapas with great service. Cyrano is more of a European style cafe with meals, some fusion style tapas and delicious cakes. They also have Jazz and movie evenings.

La Mala is a funky small corner bar with some of my favorite tapas in Almería with different flavors and a bit of spice, something hard to find in Spain! Their specialty is all kinds of tortillas and if you order of the menu you can also sit in the upstairs space. 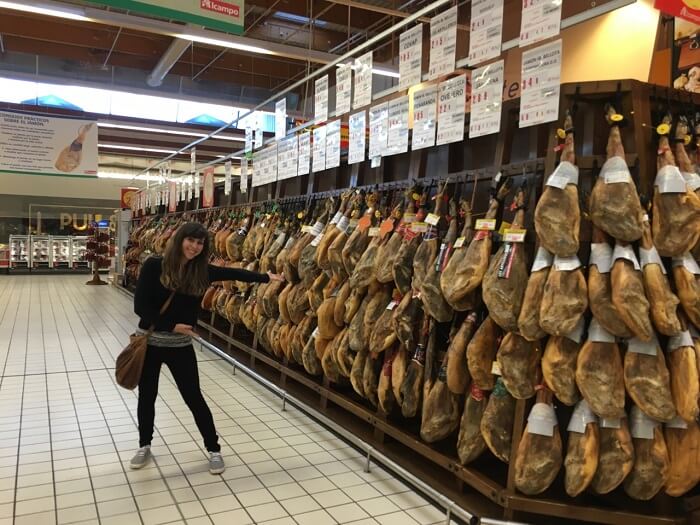 El Vino en un Barco has more traditional meat and cheese tapas with a few other tempting options like an apple empanada, or falafel tapa. They also have amazing carrot cake and an extensive cocktail list. Ask for something not on the list and the staff are happy to make it up for you!

One thing to remember in Spain is that eating times differ from what many of us are used to. Lunch is usually a late affair around 2-4 pm, and then kitchens close before opening again from around 8.30 pm.

What NOT to do in Almería

There’s not really anything to avoid here, it’s all up to personal preference! Some areas of the city are not as nice as others, but it’s a small city and you don’t need to be as hyper aware of your belongings as in Madrid and Barcelona.

The main thing to be aware of is siesta time. Many stores close between 2 and 5 or sometimes even 6 pm. In the summer it’s so hot at this time you’ll probably want to take a siesta too, but if you have plans it’s best to check the opening times of the places you want to go so you’re not disappointed!

Best way to get around in Almería

All of the main sites in Almería city are within walking distance which makes things very easy. I’d recommend staying in the central city for closer dining and shopping options, although the beach isn’t far and has some lovely restaurants along the promenade. If you’re not up to walking, taking a cab between top sites is very cheap, around 5 Euros.

To get out of Almería to the Tabernas or Cabo de Gata it’s best to hire a car from the bus station or airport. It’s not too expensive and usually at least one company will have a deal on. There’s so much to see within a couple of hours of the city that you can go out for a day and return, or spend a few days driving around Almería province.

Bangkok in ONE Day

Things to do in Yangon

Sonja is a perpetual expat who has lived in numerous countries including the US, Canada, UK, Australia and has based herself in Spain since January 2016. Originally from New Zealand, but with many “second homes”, she blogs about her adventures, experiences, and misadventures while travelling and living abroad.